Franchesca Nor’s Dive: The Journey from the Coastline 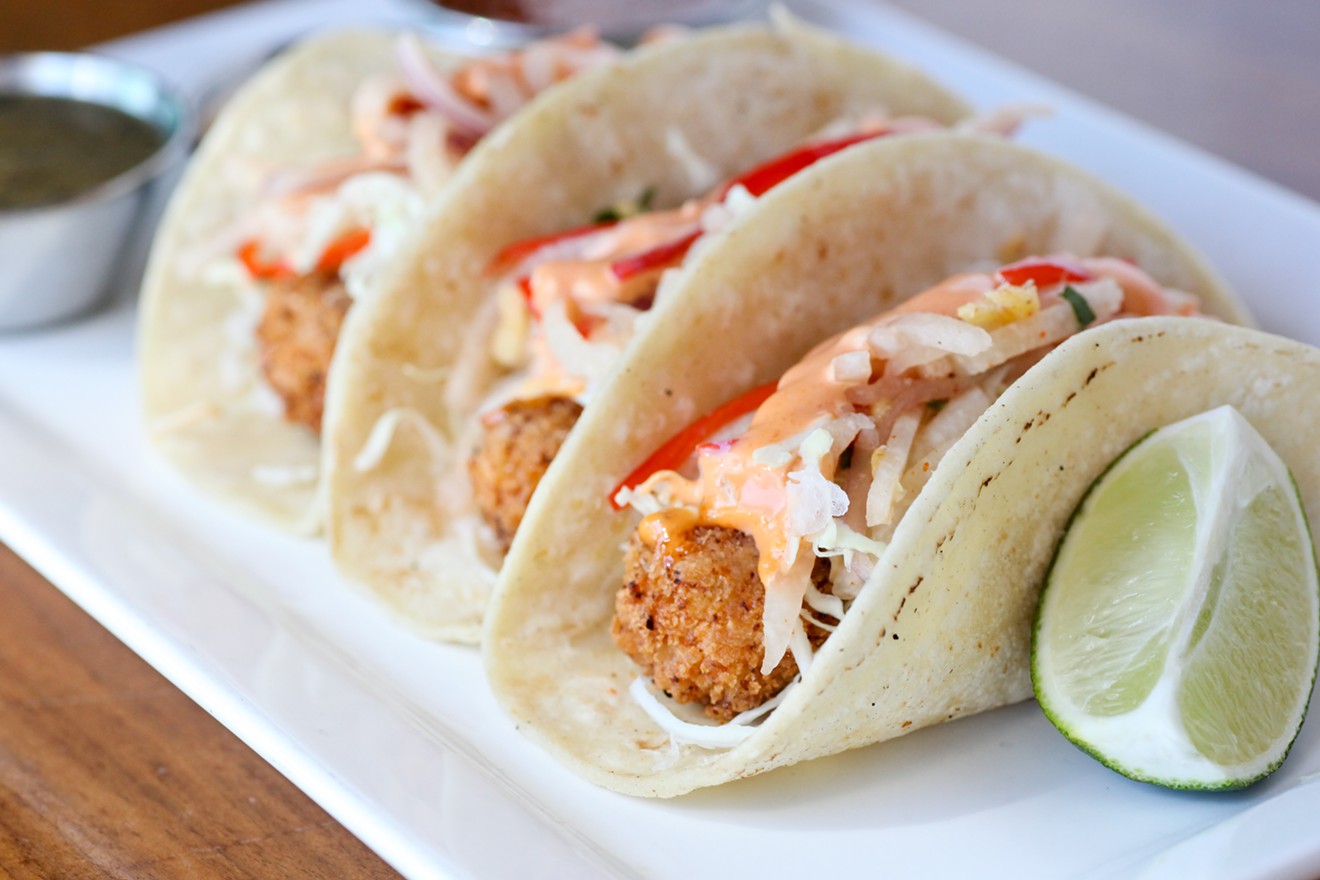 Fresh seafood fills the menu at Dive Coastal Cusine in University Park. Claire McCormack Photography
In a time when restaurants are pivoting, closing and opening, Dive Coastal Cuisine is getting by, marking 10 years of business.

Originally from Southern California, Dive owner Franchesca Nor has traveled from Miami to Europe, exploring every nook and cranny of the culinary and hospitality industry, interning with chefs, running catering and backstage concessions for huge music festivals, running operations, acting as a manager and serving as a waitress.

“I knew that I wanted to own a restaurant, so I didn’t only work in the kitchen,“ Nor says. “... I basically tried to work in many areas of the hospitality industry, knowing that I would learn from each area to help me own my own restaurant and help me know where everybody comes from.”

She moved to Dallas and worked as a waitress for Neighborhood Services in North Dallas. Working under restaurateur Nick Badovinus when he was just starting gave her the affirmation and inspiration she needed to materialize her creative vision.

Franchesca Nor
courtesy of Dive Coastal Cuisine
In 2010, Nor opened Dive Coastal Cuisine, offering a selection of seafood flavors reminiscent of her time in San Diego and Miami. She uses locally sourced produce and seeks non-GMO, hormone-free ingredients for the restaurant.

When Nor became a mother in 2016, she took a break from running a business and gave Victor Corral, her sous chef and “partner in crime,” a share in the business's profits and handed over the reins.

“[He's the] boots on the ground. He manages the restaurant. He will show up every day, make sure the staff is in place, the food is in place; he’s the onsite operator,“ Nor says of Corral, who has worked with her eight years. “We discuss everything we do together.”

She moved to a ranch outside of Aspen to have her son Archer, where she grew vegetables and made cheese and ice cream. While she visited Dallas every three months, she spent most of her time working remotely.

“I took myself out of being inside the restaurant and working on the outside, which actually made our restaurant more profitable because I could look at things differently and assess differently,” Nor says.

After a couple of years of sustainable farming in Colorado, Nor made a comeback and made sure her customers knew she was back in the restaurant and that return meant a revamp for Dive.

She updated the interior and added a bar, which has a menu most popular for its flavored margaritas, such as hibiscus and coconut. 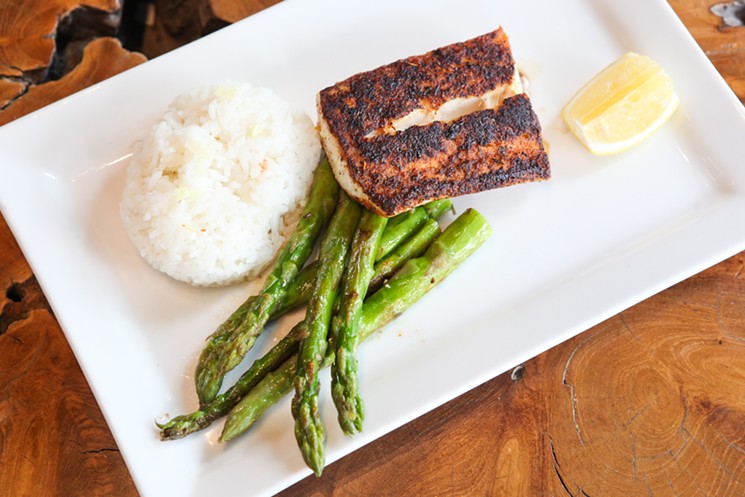 Dive is also an easy place to get a healthy meal.
courtesy of Dive Coastal Cuisine
The ability to see the bigger picture especially comes in handy during a pandemic, she says.

Communicating with employees and other restaurants became a survival tactic to safeguard the Dive family against potential COVID-19 exposure.

“I have the coolest, the best team ever. Five of them have been with me since the very first day, so they have seen all my ups and downs. They have been through everything with me,“ Nor says. “They make my food better than I can make my food … one thing I really wanted them to know [is] that they have job security. No matter [if] they got sick or not, I paid them when they were gone. It had to be a group effort.”

Dive worked with a smaller staff and dialed down the menu to the essentials and the best sellers: the Dive grilled chicken wrap, the seared ahi tuna wrap and the salads.

Nor uses Alto, Grubhub and Favor for discounted deliveries.

“What really kept us going was the curbside pickup, shifting our entire dining experience into all to-go,” she says.

In one pivot many restaurants have been using these days, Dive has a take-and-bake menu, which offers meals for customers to finish and enjoy in the safety of their homes.

In the Before Times, catering made up 10% of Dive's revenue stream. Whereas that percentage is now negligible, Nor still enjoys the opportunity to cater for fun, innovative events. The most recent catering trend is backyard parties of about 10 or fewer people, where meals are served on individual trays so social distancing can be maintained. 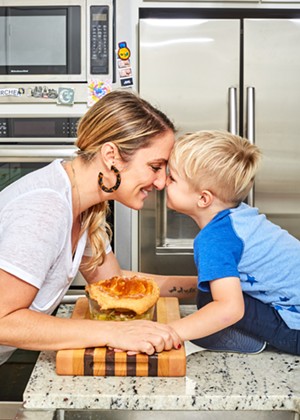 Nor and her son Archer
courtesy of Dive Coastal Cuisine
While being an entrepreneur is no easy feat, some might argue homeschooling a 4-year-old is even more demanding.

Archer “loves mommy being home with him,” but it has been a difficult transition to online learning.

“We’re doing the best we can, and he’s been really great throughout the whole process, but it is just not an easy process,” Nor says.

He also shares Nor’s love for food and often lends a hand in the kitchen.

“I always, always cook for him. There was a period of time where he would not eat at a restaurant; he only wanted food from mommy. He loves vegetables and loves colorful food,“ Nor says. “... Part of home curriculum is to cook something each week. We record ourselves cooking, and we send it in for his classes. He loves it, he’s very comfortable in the kitchen. He knows how to use a knife properly. He can cut vegetables for me if I asked him to.”

Dive Coastal Cuisine, 3404 Rankin St., University Park (Snider Plaza). 214-891-1700. Open for takeout, delivery and dine-in 11 a.m. to 8 p.m. Monday through Saturday.
KEEP THE DALLAS OBSERVER FREE... Since we started the Dallas Observer, it has been defined as the free, independent voice of Dallas, and we'd like to keep it that way. With local media under siege, it's more important than ever for us to rally support behind funding our local journalism. You can help by participating in our "I Support" program, allowing us to keep offering readers access to our incisive coverage of local news, food and culture with no paywalls.
Make a one-time donation today for as little as $1.

Drishti Sachdeva is an intern at the Dallas Observer and studying business and fashion media at Southern Methodist University. She also has a notorious sweet tooth and an obsession with street food.