Valentino’s in Rowlett Has Everything Bad Italian Restaurants Are Missing

How You Doin' with veal Angie Quebedeaux
One could argue that Italian mom-and-pop restaurants in Dallas are essentially like churches or 7-Eleven’s: There is one on every corner and they’re pretty much all the same. However, if you take Forest Lane and head east through Garland until you hit Rowlett (on Route 66), you’ll find a family-owned Italian place that is so legit Italian your cousin Vinny would be proud.

Valentino’s Ristorante Italiano has been open for a few years now and they draw in a crowd almost every night of the week, for very good reason.

Valentino’s is a family-owned and operated restaurant and when we say family, expect to see cousins, nieces and nephews of the owner working here. We usually sit at the bar and our server is usually Niko with an accent reminiscent of a character from The Godfather.

Leave your carb hate and at the door; house-baked bread rolls with garlic dip.
Angie Quebedeaux
To start, they serve complimentary and unlimited garlic rolls that will cause even those with the strongest levels of carb self-control to be challenged. In fact, when we were there recently, two gentlemen had zero self-control and decided that their meal was going to be polishing off a half-dozen of these each. Order their garlic dip, listed under their side dishes, to go with. It's loaded with garlic, basil, olive oil and red pepper flakes in a bowl at one time.

The Prezzo Special
Angie Quebedeaux
If you’re in the mood for a dish on the “lighter” side, try the Prezzo Special. Served with angel hair pasta in a spicy white wine garlic sauce, it is loaded with chopped chicken, pepperoncini’s, hot cherry peppers, mushrooms, artichoke hearts, and tomatoes.

On our most recent visit there, we tried the Joey Tribbiani-tribute, How You Doin’ entrée (photo at top), which is served with breaded chicken or veal, red sauce, melted mozzarella, creamy aurora sauce, feta cheese and chopped hot cherry peppers. It’s like chicken or veal mozzarella, but the aurora sauce, feta cheese and hot cherry peppers add a nice twist. 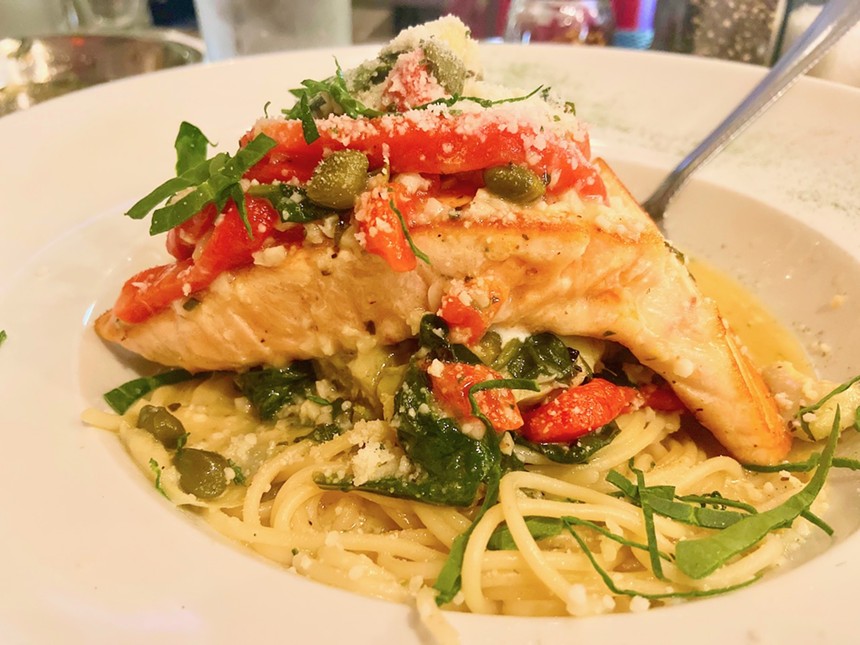 The salmon piccata alone might be worth the trip out east to Rowlett.
Angie Quebedeaux
The salmon piccata , a nightly special,  is a huge filet of salmon is served with sweet red peppers, capers, artichokes, and spaghetti over spaghetti in a lemon butter garlic sauce.

If you prefer a more traditional pasta dish, red sauce, and lots of delicious flavors, then you should check out the Fuggedaboutit, which includes chicken, shrimp, Italian sausage, mushrooms, roasted red peppers, pepperoncini, over bowtie pasta and served with a creamy lobster base sauce. It’s everything your long-lost Italian cousin would say you need to order.

The Valentino family
Courtesy of Valentino's
We never have room for dessert, but we ordered their bread pudding to go this time. And it was worth every calorie it contained and then some. We would gladly go to the gym for a week afterward to work it off, but instead, we chose to fuggedaboutit and just enjoyed it instead.

Valentino's Ristorante Italiano, 2507 Lakeview Pkwy (Rowlett). Open 4-10 p.m. Tuesday - Thursday, 11 a.m.-10 p.m. Friday-Saturday, 11 a.m.-9 p.m. Sunday, closed Monday.
KEEP THE DALLAS OBSERVER FREE... Since we started the Dallas Observer, it has been defined as the free, independent voice of Dallas, and we'd like to keep it that way. With local media under siege, it's more important than ever for us to rally support behind funding our local journalism. You can help by participating in our "I Support" program, allowing us to keep offering readers access to our incisive coverage of local news, food and culture with no paywalls.
Make a one-time donation today for as little as $1.