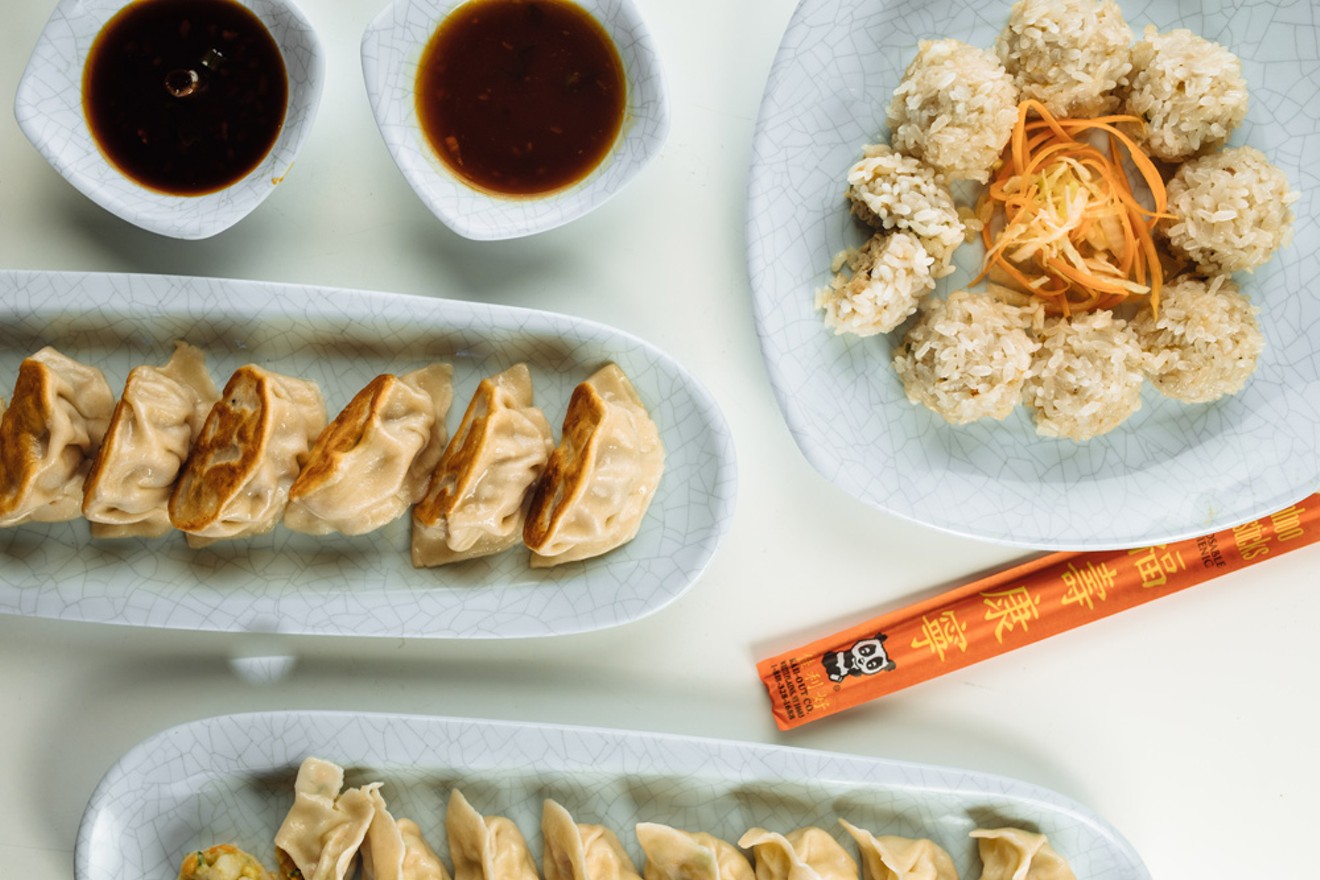 Pan-fried dumplings and rice balls Kathy Tran
What an expressive name is Hello Dumpling. It’s short, sweet and friendly, and it holds out the promise of delicious dumplings. There’s only one problem with the name: This new restaurant’s noodles are even better.

In the space formerly occupied by Good2Go Taco on the east side of White Rock Lake, Hello Dumpling is serving a wide variety of northern Chinese home cooking and market foods: grilled skewers of meat, beef noodle soup, petite plates of veggie sides. There's nothing too ambitious here, but that's a central part of the restaurant's charm. 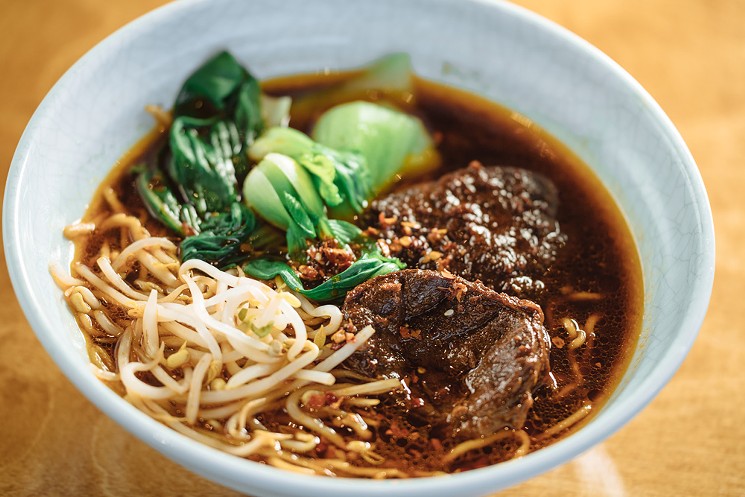 Beef noodle soup
Kathy Tran
This winter, the hottest dish around White Rock is likely to be a bowl of Hello Dumpling’s beef noodle soup ($9). The kitchen is making its noodles by hand, long and gently curly, and cooking them perfectly. The beef noodle soup sports a brown broth so rich with spices that its aroma hits the nose like an explosion. There are tender, flavorful slices of beef shank, bok choy, bean sprouts and scallions. Hot peppers hidden somewhere in the broth make their presence felt, as does the richness of bone marrow. It’s wonderful.

Peking noodles are excellent, too, topped with bean sprouts, scallions, julienne zucchini and carrots, and a spicy, red pepper-flecked mixture of ground pork and finely minced tofu ($8). (A vegetarian version is available with mushrooms and eggplant, $7.) The noodles are a dream, the ingredients are balanced beautifully, and the peppers impart a comfortable heat. They’re as good as leftovers as they are fresh.

Grilled chuan’r beef skewer
Kathy Tran
Another big non-dumpling success: grilled skewers of meat and tofu. This is pure street food, nothing fancy, morsels of grilled protein coated in a dusting of salt and red pepper flakes. The grilled chicken skewers are smoky, spicy and exactly what they ought to be ($6).

Hello Dumpling’s dumpling dough seems to be improving with trial and error. Early on, the wrappers on boiled dumplings could get a little thick, but on subsequent visits, the skins grew thinner and more tenderly chewy. The pan-fried dumplings, especially, are good choices. Fried fish and scallion dumplings, for instance ($9.50), are generously loaded and flavorful, and shrimp dumplings, ordered pan-fried with zucchini mixed into the filling, offer tender shrimp that, despite the frying, do not overcook ($9.50).

Dumplings are available either boiled or fried. Steamed dumplings, which some diners love best for their texture, were available when Hello Dumpling opened but are no longer on the menu.

One day, I asked an employee when steamed dumplings will be back.

“Oh, we stopped selling them,” she told me. “They weren’t tasty.”

"When you steam from raw, it takes 20 minutes," Chow says. "There's no time for that in my setup. Our goal is to get those dumplings out fresh and fast."

Some diners might bristle at the compromise — Chow happily acknowledges that steamed dumplings are great — but the restaurant succeeds in its mission. Service is fast and friendly, and meals arrive quickly, but the interior is so cheery that most diners can't help staying longer, lingering over tea. At the end of one meal, I went back to the counter to order more food. On another visit, a table of neighbors had brought several bottles of white wine. (Now there's an idea.) 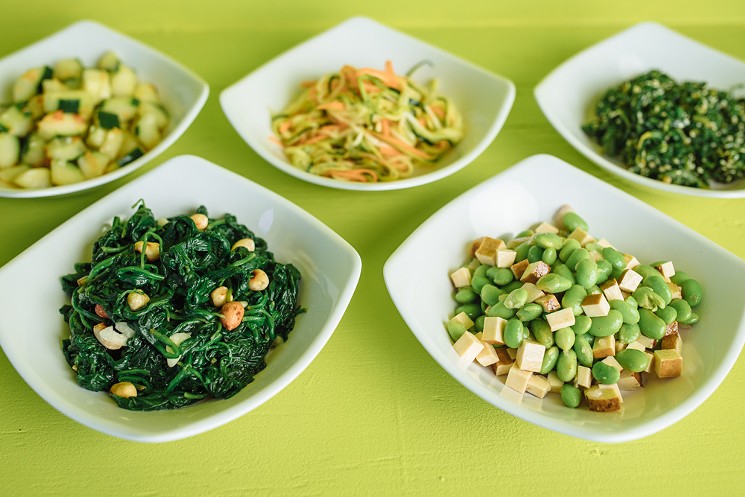 "Cold bites" side dishes
Kathy Tran
First-timers might plump for dumplings and noodles, but regulars will be aware that another menu category is equally essential: the "cold bites.” This list of veggie-based salads and sides is hiding some of the best dishes at Hello Dumpling. All are $3 each, and many are must-orders, especially the zucchini “noodles,” mixed up with shreds of carrot and lightly dressed, and the smashed cucumbers, which are gently pickled and sauced with just enough hot pepper. We also enjoyed a small plate of finely chopped kale — mince kale up small enough and it loses its toughness — topped with sesame seeds and an acidic dressing that brightens up the dish.

Chow says the veggies serve another purpose besides being good on their own. "I want people to know that you can chow down on a plate of dumplings, but intersperse it with maybe zucchini noodles, and it enhances the experience," she says. The heft of pork and cabbage filling, or the oily luxury of fried dumplings, is better when contrasted with a tart, acidic bite of cucumber or kale. 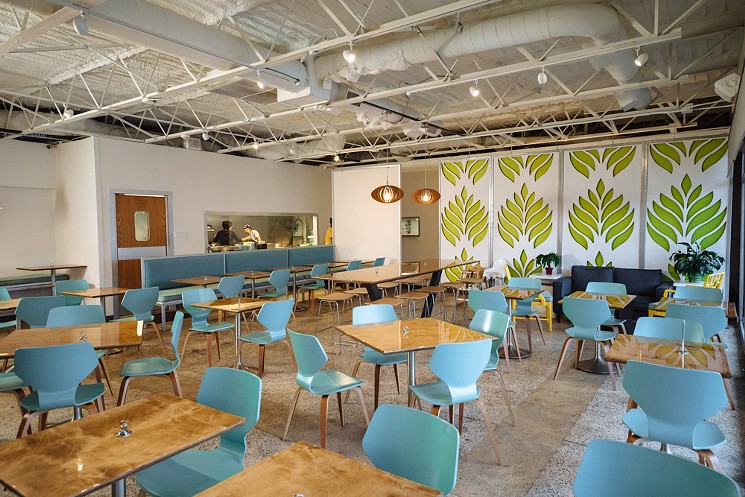 The dining area at Hello Dumpling
Kathy Tran
Hello Dumpling is a casual home-cooking spot, not a fine-dining experience, but that's OK. It has serious noodle-house rivals in suburbs like Plano, but that's OK, too. As our city's culinary talent increasingly self-segregates into luxurious, high-end restaurants and everything else, Dallas can use more places focused on filling a genuine need in a neighborhood, doing it affordably and doing it well. Dallas needs more places to bring wine, meet friends and feast on simple, satisfying home cooking without fuss, valet parking or a half-hour drive north.

"I grew up on those things," Chow says about Hello Dumpling's menu. "That's my comfort food.

"What is novel here," she adds, "is Western diners don't have it in their heads that dumplings are not an appetizer. Growing up, we'd make a bunch of dumplings and we'd brag about, oh, I ate 25 dumplings today."

That sounds like a pretty good day. But some zucchini salad and a big bowl of beef noodle soup — that could be even better.