The former IHOP spot at the southeast corner of East Mockingbird Lane and Abrams Road is getting a face-lift that comes with oysters. Hudson House
It’s not the same Lakewood you grew up with.

The newest addition to East Mockingbird Lane and Abrams Road is Hudson House, an upscale seafood restaurant and raw bar opening early next year. It will be the company’s third outpost.

“There was no question that Lakewood would harbor our third Hudson House,” says founder Hunter Pond in a release. “We can’t wait to bring the classic, energetic vibe surrounding our Highland Park and Addison spots to East Dallas.”

That’s quite an about-face for 4040 Abrams Road, where IHOP previously served all-day breakfast for years. Gone are the days of $6 flapjacks. A major remodel is getting underway to transform the restaurant into a sophisticated dining room.

The entrance of Hudson House to the northern edge of Lakewood is yet another shift as more restaurants cater to the increasingly affluent neighborhood. Longtime staples such as Taco Joint and White Rock Coffee Express are being surrounded with newer concepts, often with higher price points.

The renovated shopping centers are now home to Olivella’s Neo Pizza Napoletana, Dream Cafe and Hillside Tavern, the latter of which opened earlier this year. Farther up Abrams, Alamo Drafthouse brought its full-service movie theater and bar experience to the edge of this area near Lake Highlands in 2018. 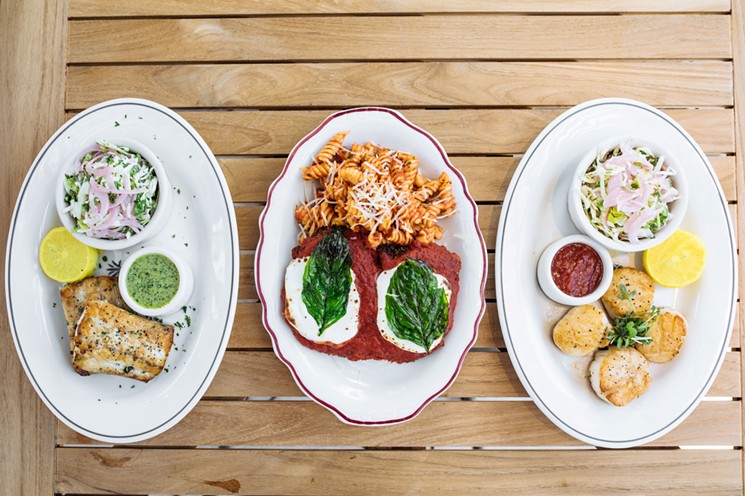 Halibut, chicken Parmesan and scallops
Hudson House
Hudson House is aiming to draw the family crowd to the massive 4,500-square-foot space, which means, yes, popcorn chicken is also on the menu.

The bar boasts an impressive cocktail menu, with the “World’s coldest martini” and a daily happy hour, which will have martinis, Bellinis, oysters and its popular cheeseburger all at half-price.

Hudson House is from Hunter Pond’s Vandelay Hospitality. That’s the group behind oh-so-popular East Hampton Sandwich Company, which has grown to six locations scattered across Dallas-Fort Worth with two in Houston. They’re also opening a steakhouse called Drake’s, but have not yet announced specifics.

Hudson House, 4040 Abrams Road. Set to open early 2020; hours will be 11 a.m.-9 p.m. daily.
KEEP THE DALLAS OBSERVER FREE... Since we started the Dallas Observer, it has been defined as the free, independent voice of Dallas, and we'd like to keep it that way. With local media under siege, it's more important than ever for us to rally support behind funding our local journalism. You can help by participating in our "I Support" program, allowing us to keep offering readers access to our incisive coverage of local news, food and culture with no paywalls.
Make a one-time donation today for as little as $1.