Jay Jerrier Needs You All to Calm Down (Or Not) 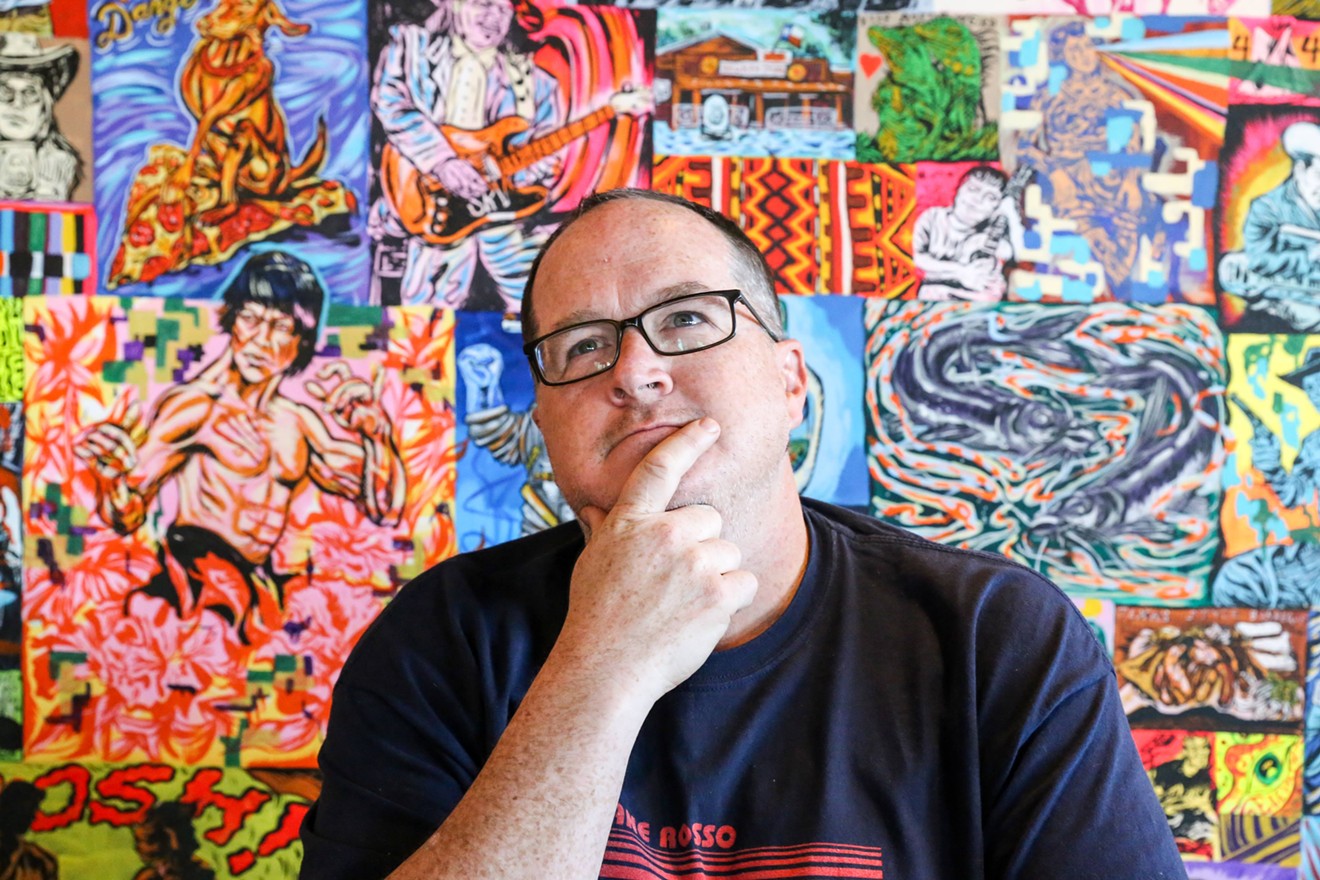 Jay Jerrier opened his first Cane Rosso in Deep Ellum over 10 years ago and has added Zoli's and Thunderbird Pies to the mix as well. Cane Rosso

Beating trolls at their own game was never the plan for Jay Jerrier. It just sort of fell onto him.

Jerrier's pizza empire started as a trailer in a parking lot, and it’s since grown to three different restaurants with three types of pizza: Cane Rosso serves Neapolitan; Zoli’s has New York style; and the newest concept, Thunderbird Pies, which is currently a ghost kitchen in Zoli's, serves Detroit style pizza.

Across the brands, the from-scratch food, spaces and partnerships are always stellar. But what’s perhaps most unusual of all of Jerrier’s offerings is his approach towards customer relations, which reached new heights last week.

We got a whiff of Jerrier’s personality early on when he refused to sell Ranch dressing to accompany his Neapolitan pizza at his original Cane Rosso location. It’s understandable: the ovens are custom-built in Italy and cook the pies at a scorching 900 degrees; the pizzas are made with hand-crushed San Marzano tomatoes and fresh mozzarella that is pulled in-house daily. That’s just a few of the features. Regardless, to besmirch it with Ranch dressing is a hard condiment to swallow.

For years, he even had a bottle of Ranch in a wooden case in his restaurant to mock those who asked for it with a price tag of $1,000. Eventually, the bottle was sold at a charity event with the money going to The Humane Society of Southeast Texas.

In a more decisive play, at one point Jerrier made a compilation of negative Yelp reviews and laid them over “Everybody Hurts,” by R.E.M. The screen flashes a review that starts with “Disappointing is an understatement!” as Micheal Stipe assures us, “... everybody cries.”

But, things hit an apex this past week when a customer, Tim Amato, was upset that Thunderbird Pies only sells pizza via their ghost kitchen at Zoli's on Monday through Thursday.

"Tim Amato
RIDICULOUS that you are trying to steer people to order Detroit style pizza only MOn-Thur and won't make them on weekends!~......WTF? Have you ever heard of how to turn your customers off? DUM DUM DUM"


"Tim Amato
Michael,WTF is so funny?"


Thunderbird Pies responded to him:

“Hey Tim. Chill out. You can stop commenting, and we can have a discussion if you calm the F down.”


Amato wasn’t having it. 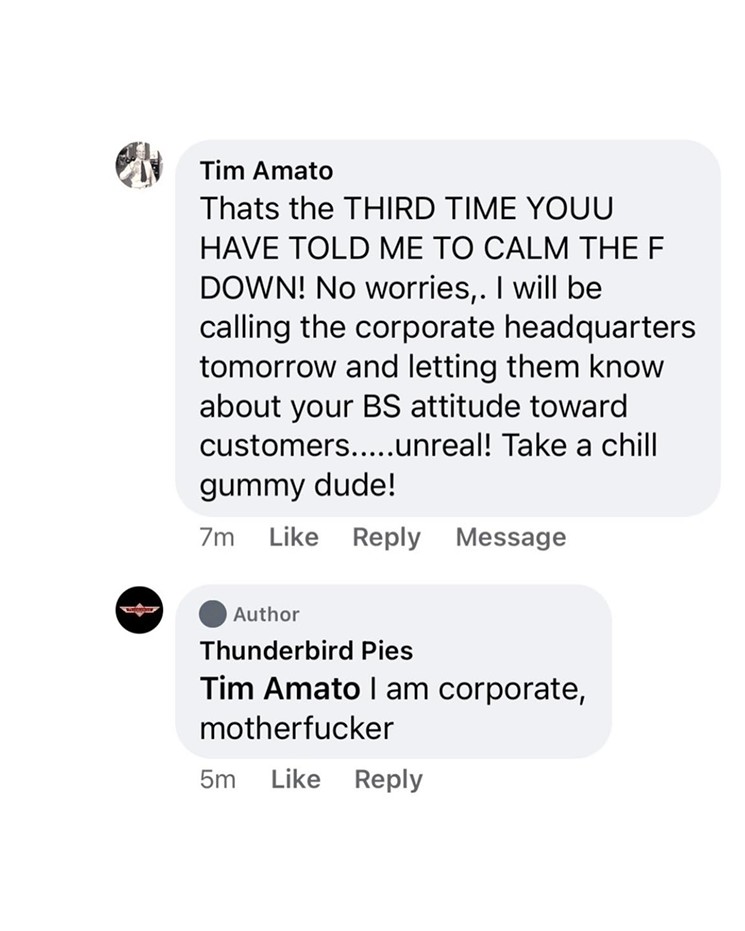 
An Ounce of Sanity

“Well when we first opened,” Jerrier says, “I took every complaint like a punch in the gut. I was obsessed with constantly reading the review sites, so much so that I couldn’t even enjoy what we were doing.”

Over time Jerrier learned that most complaints were from people with an ax to grind or “maybe didn’t want to have the problem solved at the restaurant, which is super easy to do.”

Over time, he stopped reading the reviews and handed the job over to his front-of-the-house team, primarily to look for specific personnel issues or trends. “But, if you’re going to have an ounce of sanity left at the end of the day, you just can’t obsess over them,” he says.

Jerrier also visits restaurants every day with his team, and they employ a third-party secret shopper program for specific notes. On-site, watching, listening and engaging with staff is a saner path toward fine-tuning a restaurant.

Opening on days not normally open doesn't fall under fine-tuning though.

Jerrier said it was actually his chief marketing officer, Jeff Amador, who provided the "bon mot."

“He has my full permission to go loose cannon … and ladies, he’s single,” Jerrier says, adding that Amador gets bombarded with messages from all the brands at all the locations and sometimes, someone pushes a little too far.

On brand, Jerrier and company made T-shirts that are now on sale through Bonfire that read “I am corporate motherf****r,” with little slices of pizza in place of asterisks.

Amador was in part hired for his ability to dish it out just like Jerrier does. People, including this reporter, read the post and thought, yep, that’s Jerrier.

"When I told my own father that I said ‘fuck’ in a Tweet he said that was a ‘bad, bad move," Amador says.

That father-disapproving tweet pointed at Ted Cruz’s Cancun snowpocalypse vacation and generated over $3,000 in donations that they used to give away free lunches the next weekend.

If you aren't flying to fucking Cancun today, some Cane Rosso locations are back open Thursday, 2/18. pic.twitter.com/GO5ay3RDw7


Sometimes a slice of snark handed out in careful increments works well. Or at least on T-shirts. (Amador says they're not making much per shirt because of the on-demand method used, but says he hopes they can find something fun to do with the money made eventually.)

Thunderbird Pies will, in fact, be open more days of the week. Construction is underway at a new brick-and-mortar in East Dallas, which should open in August.

Until then you can find them inside Zoli's in Addison and Fort Worth, Monday through Thursday, 12 - 9:30 p.m.
KEEP THE DALLAS OBSERVER FREE... Since we started the Dallas Observer, it has been defined as the free, independent voice of Dallas, and we'd like to keep it that way. With local media under siege, it's more important than ever for us to rally support behind funding our local journalism. You can help by participating in our "I Support" program, allowing us to keep offering readers access to our incisive coverage of local news, food and culture with no paywalls.
Make a one-time donation today for as little as $1.