Knife & Spoon pop-up reservations are available on Resy. Knife Steakhouse
Michelin won't bring its star-studded guide to Texas, so chef John Tesar is bringing it to us.

Long-time chef John Tesar packaged his highly lauded Dallas steakhouse Knife with his other concept,  Spoon, a seafood restaurant that operated for several years in Preston Center before closing in 2014. He's found a home for Knife & Spoon at the Ritz Carlton in Orlando, where this year it was awarded a Michelin star.

We bemoaned the fact that Texas restaurants don't get Michelin stars because the rubber tire people don't feel the Lone Star State merits a guide, which are assigned by region and currently include California, DC, Florida, Chicago and New York. We feel it's all a big tease. 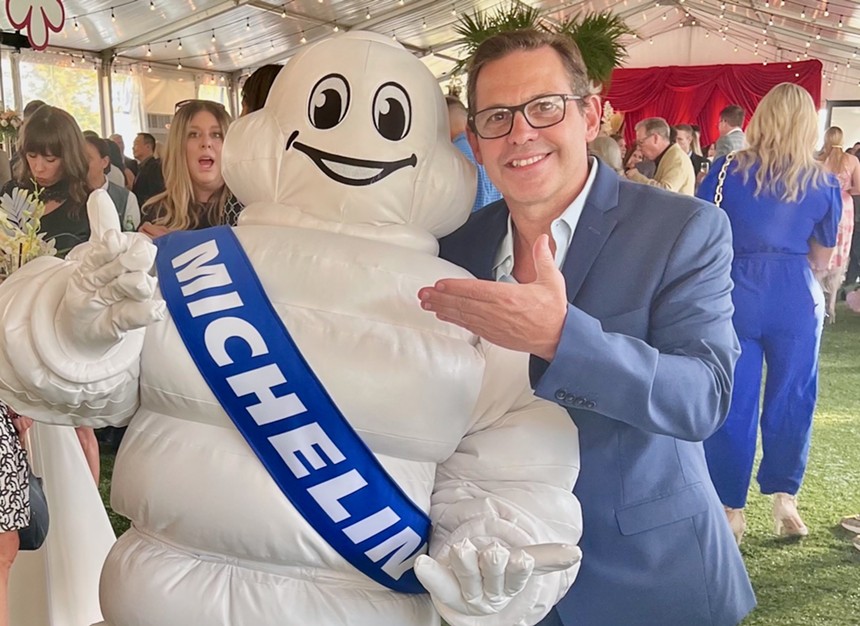 Chef John Tesar is bringing his fluffy friend to Dallas.
Knife Steakhouse
While Knife has locations in both Dallas and Plano, we don't have Knife & Spoon. But now, anyone looking to update their Michelin dining scorecard might soon have a new opportunity.

Tesar is bringing Knife & Spoon's menu to Dallas, via a three-night pop-up in October at Knife Steakhouse in Plano. Tesar will create his most popular dishes from the Orlando restaurant. The four-course dinner will cost $165 and include a hamachi crudo, king crab in the style of scampi, goat cheese ravioli and a 45-day dry-aged 44 Farms strip with caviar potato pave. The meal ends with dark chocolate-covered strawberries and panna cotta dessert.

Reservations for the Knife & Spoon pop-up will be available on Resy on Sept. 13 at 9 a.m. Note: reservations for dinner at Knife are separate from this event. Look for "Upcoming Events" at the bottom of Knife's Resy page. There's availability for 40 guests per evening. The three dates are Oct. 11, 12 and 15.

For a bit of preview, here's what Michelin has to say about the restaurant:

"Care and skill are the hallmarks of this team, as they turn out contemporary steakhouse fare woven with seafood. ... The dry-aged steaks are big and beautiful, and sides are attention-grabbing, evidenced by the house-made pasta in the luscious mac and cheese."

Knife Steakhouse is located at The Shops at Willowbend at 6121 W. Park Blvd., Plano.
KEEP THE DALLAS OBSERVER FREE... Since we started the Dallas Observer, it has been defined as the free, independent voice of Dallas, and we'd like to keep it that way. With local media under siege, it's more important than ever for us to rally support behind funding our local journalism. You can help by participating in our "I Support" program, allowing us to keep offering readers access to our incisive coverage of local news, food and culture with no paywalls.
Make a one-time donation today for as little as $1.