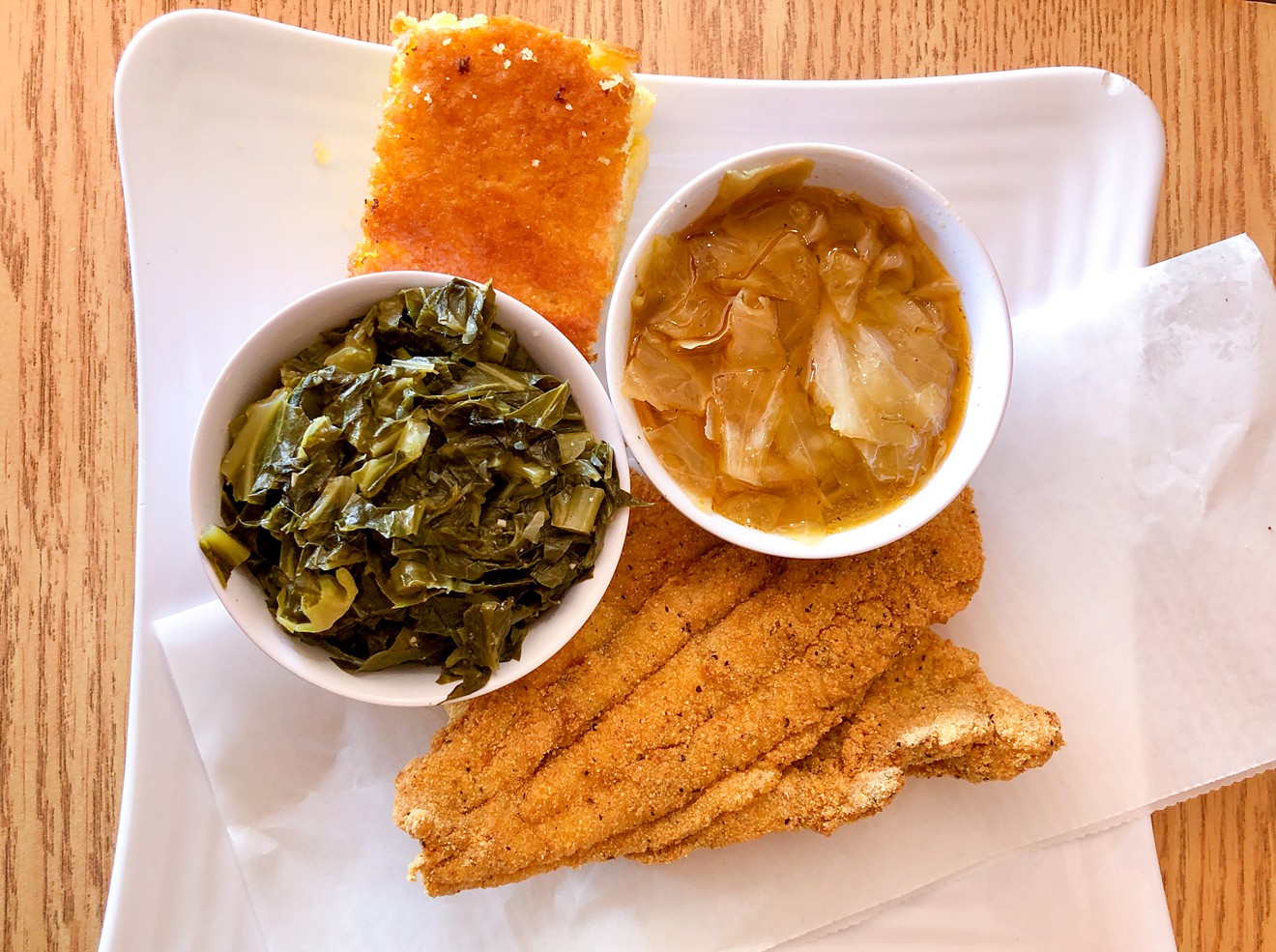 Fried catfish, greens, cabbage and cornbread Paige Weaver
Casserole Soul Cafe is 18 miles south of downtown Dallas, but it feels like it’s a small-town restaurant, much farther from Dallas than a 25-minute drive. It’s a Southern restaurant that features soul food such as fried catfish, fried pork chops, chicken-fried chicken and a bevy of sides.

Casserole Soul Cafe sits in Lancaster’s historic town square, which was established in the mid-19th century. Businesses have brick storefronts and front windows that look onto the square, all covered by a red wooden awning along the length of the block. Each establishment has a wooden sign hanging from the awning, adorned with its name.

The restaurant’s interior speaks to the building’s history. It has a pressed tin ceiling that’s been painted white, exposed brick walls and well-worn wood floors. A chalkboard above the checkout counter boasts the day’s specials. 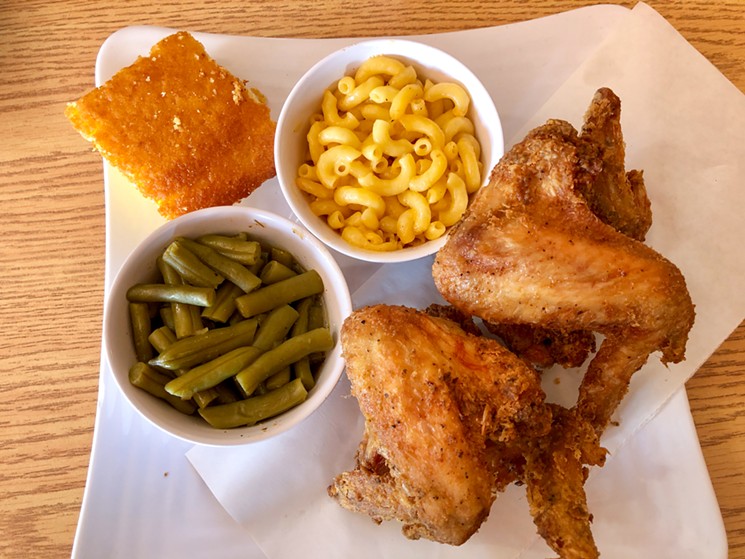 Chicken wings, macaroni and cheese, green beans and cornbread
Paige Weaver
Service is friendly and familiar, and guests are greeted by name. Casserole Soul Cafe is the kind of place that attracts regulars.

Stephen Cobb owns Casserole Soul Cafe, which he opened in early 2018 with his friend and former colleague Robert Roberts, who runs the kitchen. Cobb used to run a club in Oak Cliff, Phat Catz, where Roberts was the chef.

For years, they’d talked about the possibility of opening a restaurant together, but it wasn’t until Cobb found the space in the Lancaster town square that they decided to move forward.

“When I told Robert that I found the perfect spot, he was on board,” Cobb says. “We’re blessed to have this space. It turned out to be ideal ... the atmosphere goes with the food, I think. It’s a good fit.”

At the very beginning, Casserole Soul Cafe served only casseroles, a dish Cobb regularly made for his family.

“Casseroles cover all food groups, and they feed a lot of people,” Cobb says.

But it didn’t take long for people familiar with the food from Phat Catz to start asking for more menu items, especially the wings, for which the club became well known. 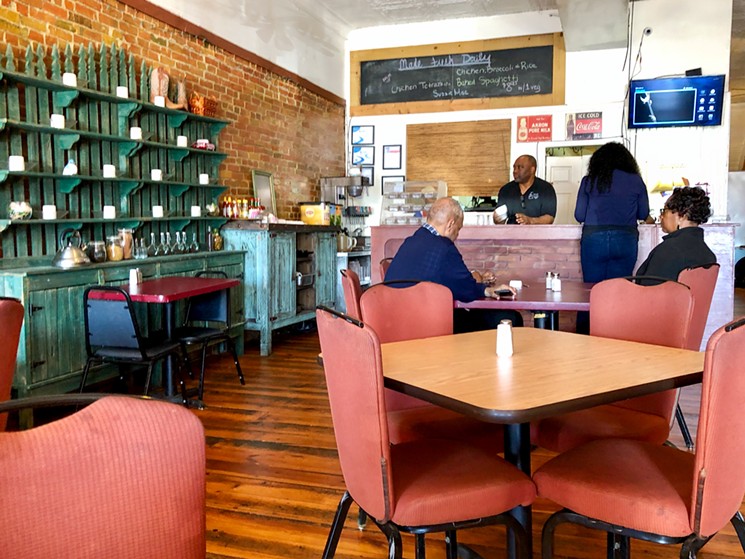 Here's where you can get casseroles and homestyle classic foods.
Paige Weaver
“We actually serve the whole wing, not just drumettes,” Cobb says. “People love those wings. It’s a good, homestyle wing.”

Cobb and Roberts called on family recipes to build the menu at Casserole Soul Cafe.

“We create these dishes that we grew up on,” Cobb says.

“I think we’ve got the best meatloaf in town,” Cobb says. “It’s one of chef Robert’s recipes, and he uses his own secret seasoning. I don’t even know what’s in it.”

Of course, they also serve the eponymous casseroles, which are made fresh daily. When we visited on a recent Sunday, they offered chicken tetrazzini ($8.95), chicken, broccoli and rice casserole ($8.95) and baked spaghetti ($8.95). All casseroles are served with one side. 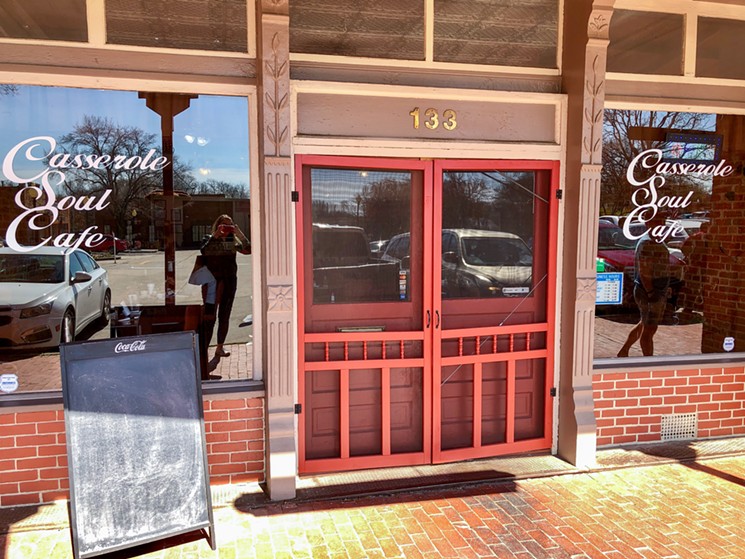 The quaint exterior of Casserole Soul Cafe
Paige Weaver
“We’ve done well since we opened,” Cobb says. “We haven’t done a lot of marketing, but people seem to hear about us.”

That’s due, no doubt, to the quality and value of the food Casserole Soul Cafe serves.

“We cook to order and serve hearty portions,” Cobb says. “We put a lot of love into our food.”

Casserole Soul Cafe, 133 Historic Town Square, Lancaster. 469-914-5005. Open 11 a.m. to 7 p.m. Tuesday through Friday; 11 a.m. to 5 p.m. Saturday through Sunday; closed Monday.
KEEP THE DALLAS OBSERVER FREE... Since we started the Dallas Observer, it has been defined as the free, independent voice of Dallas, and we'd like to keep it that way. With local media under siege, it's more important than ever for us to rally support behind funding our local journalism. You can help by participating in our "I Support" program, allowing us to keep offering readers access to our incisive coverage of local news, food and culture with no paywalls.
Make a one-time donation today for as little as $1.
Paige Weaver
Contact: Paige Weaver