Chef Joanne Wieneke of McKinney on Foodtastic courtesy of Disney
On Disney Plus’ new baking competition Foodtastic, teams of bakers, chefs and food designers compete for the coveted prize of a Disney pin and the opportunity to brag about winning among some of the world’s most creative food crafters. In each episode of the competition, all of which premiered last month on the streaming platform, the teams must adhere to a specific theme, creating a cake or other baked goods, using items provided to them by production.

In the season’s Marvel-themed fifth episode, a team named The Misfits creates a replica of Black Panther and Rocket using rice cereal, marshmallows and gingerbread plus isomalt to create an Infinity Stone. The Misfits are chef Blaque Shelton from Indiana, Stacy Frank from Austin and Dallas’ own Jesse Lesser. The latter performed exceptionally well in this particular episode, perhaps in part to Lesser’s extensive knowledge of the Marvel Cinematic Universe.

“I fangirled so hard,” Lesser tells Dallas Observer. “I'm pretty sure they cut out some parts because you couldn't understand me because I was speaking so quickly about how I love the Marvel Universe. I have all the movies. You can ask me all the questions, [and] I'll give you the backstory, I'll give you outlines, storyboards, whatever you want. I'm your girl when it comes to Marvel.”

Lesser works as the kitchen manager at Fancy Cakes by Lauren. Before moving to Dallas “eight or nine” years ago to be closer to family, Lesser studied at Culinary Institute of America in Hyde Park, New York.

In Dallas, Lesser enjoys the zoo, the aquarium and the several museums the city has to offer, as well as the dining scene.

“Dallas has one of the best food scenes I've been around,” Lesser says. “The restaurants here are killer.” 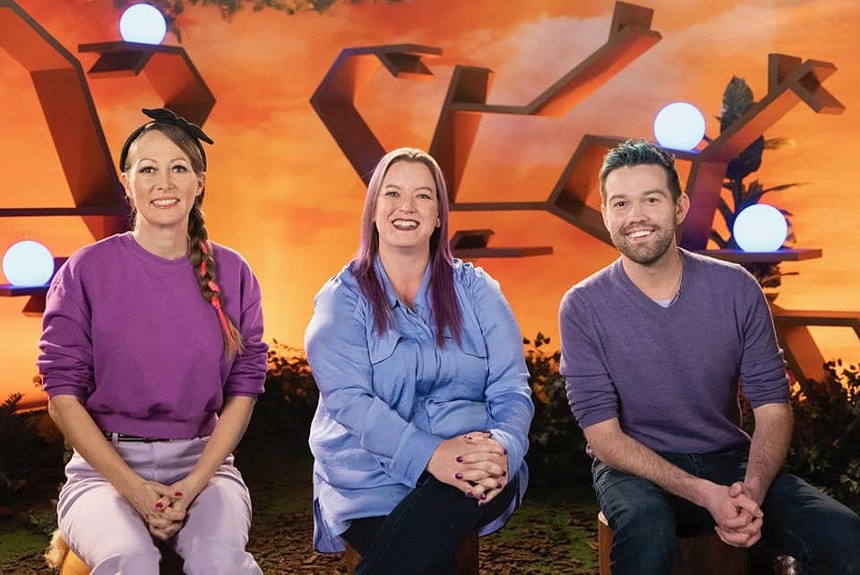 Michelle Leckenbusch, Tammy Mashburn and Dylan Humphrey
courtesy of Disney
In the seventh episode, inspired by the movie The Lion King, Team Ladies and The Champ re-create an adult Simba and Zazu seated atop a log. On Team Ladies and the Champ are Michelle Leckenbusch and Tammy Mashburn from Florida, and Dylan Humphrey from Tyler.

Humphrey is a self-proclaimed “pastry engineer” who began baking when he was 12. He opened Kool Kakes in Tyler when he was 20 and specializes in wedding cakes. Humphrey and his husband married last year, and shortly after, met teammates he’d be competing with on Foodtastic while visiting in-laws in Florida.

“They both live in Florida,” Humphrey says, “so while we were up there, we actually got to meet them for the first time. And then the next time we met, we were filming for Disney.”

As a lifelong Disney fan, Humphrey describes the experience as “magical.” He and his husband celebrated their honeymoon at Disneyworld shortly after the show’s premiere. At the time, they had not yet watched his episode, but commercials for Foodtastic would play on TV in their hotel.

“My husband was like, ‘We can’t go anywhere without seeing your face,’” Humphrey jokes.

Episode eight follows an Up theme, in which one of the teams, Team Majarlika, is entirely composed of Filipino chefs. The chefs, Mayen Orido and Antonio Ouano of Arizona and Joanne Wieneke of McKinney  re-create the Mayon Volcano, paying homage to their homeland.

As a child, Wieneke loved Disney. Her godmother would often mail her souvenirs from Disneyworld. When she immigrated to the United States from the Philippines, one of the first things she did was take her children to Disneyworld.

You’ll have to stream the series to see which of our Dallasites win the competition, but regardless, making an impact is part of the Disney magic.

“Win or lose,” Wieneke says, "it made the Filipino community proud that we represented such an iconic landmark in the Philippines.”
KEEP THE DALLAS OBSERVER FREE... Since we started the Dallas Observer, it has been defined as the free, independent voice of Dallas, and we'd like to keep it that way. With local media under siege, it's more important than ever for us to rally support behind funding our local journalism. You can help by participating in our "I Support" program, allowing us to keep offering readers access to our incisive coverage of local news, food and culture with no paywalls.
Make a one-time donation today for as little as $1.