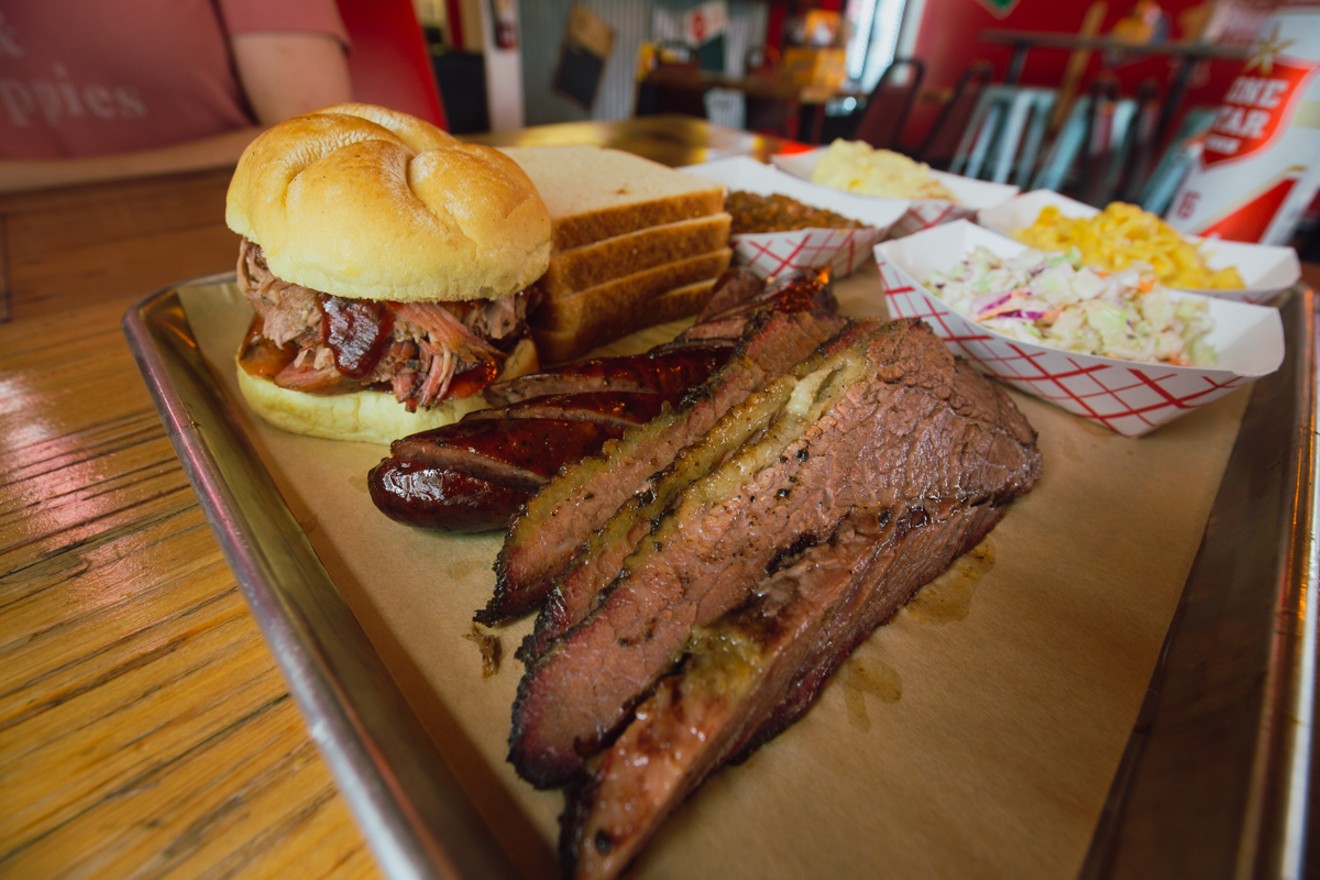 Stiky Ribz has the meats, perfectly baptized in smoky Texas gospel. Chris Wolfgang
It seems logical to assume that opening a new restaurant would take lots of planning. Perhaps the future owners would scout locations, do some research about the neighborhood and line up finances. Then there's build-out, menu planning, stocking the kitchen and training staff. Months might go by, or maybe a year, before the new restaurant would be ready for opening.

Or, if you're James Reed, you do it all in three weeks.

Reed is the owner of Stiky Ribz, the growing barbecue spot in Forney that suddenly popped up with a new location in the former Louie King space on Greenville Avenue. Roughly three weeks ago, Reed walked into the building after another local bar owner decided a barbecue joint would be too much work for him, and asked Reed to step in.

If you recall, we had high hopes for Louie King, which touted Will Fleischman manning the pits and had crowdsourced more than $150,000 in funding for the restaurant. But shortly after our first visit, Fleischman had bowed out, and just six months after opening, the restaurant closed its doors, the owners unreachable for comment. 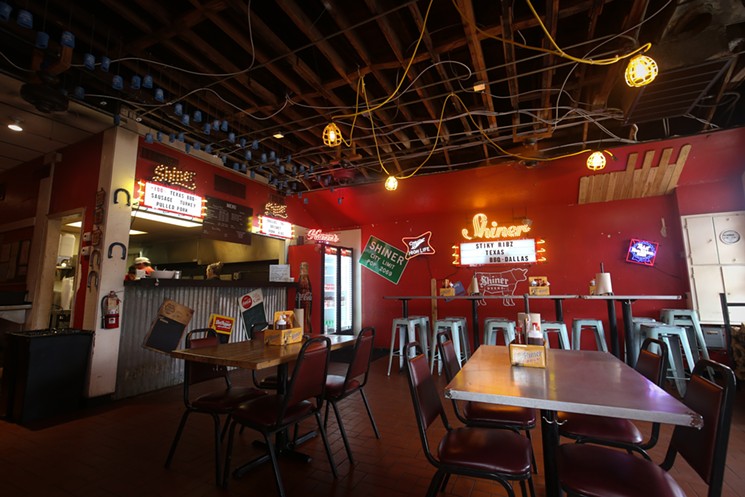 Stiky Ribz seems less concerned with new decorating, and more concerned with turning out good barbecue. We like their priorities.
Chris Wolfgang
Reed got the new barbecue spot up and running in record time, which Reed has already done in Forney. In fact, the Forney location is undergoing expansion of its own that should finish next month, but Reed recognized the opportunity when he saw it.

"We came and took a look at it, and it's a great location," Reed says. "I got home and told my wife that this place had come up, and she's like, 'We're not even done with Forney yet!'"

Reed had his work cut out for him, as the quick closing of Louie King left lots to be done.


Stiky Ribz could be just what Greenville Avenue needs in a barbecue joint: solid Texas barbecue without much glitter.

"It took a solid week to clean this place. When the people left, they left," Reed says. "No cleaning, there was food everywhere, the trash was overflowing. It was nasty. Then, I spent the next two weeks hiring people, training staff and getting set up. We haven't even done any advertising or anything."

We believe him. In fact, the Louie King neon sign still sits above the awning, although the Stiky Ribz logo now adorns the window. Inside, short of pulling out the worn drop ceiling tiles and stringing some lights, the look hasn't changed much from when Daddy Jacks occupied the space for 20 years. What has changed is the barbecue, which we found to be rock solid on opening weekend.

"It's the same barbecue we put out in Forney," Reed says. "The smoker is different, and we're still learning. The more we run this pit and the more we figure it out, our stuff is going to get better."

Five meats, four sides and pudding. It's simple, yet smartly executed barbecue at Stiky Ribz.
Chris Wolfgang
Honestly, it's hard to imagine how much better the barbecue could get. Our moist brisket ($5.50/quarter-lb.) could have come out of a barbecue textbook, with just the right amount of rendered fat and meat that's been baptized in perfect levels of smoke. A lot of new barbecue spots end up over-smoking, but we were pleased to find out that's not the case with Stiky Ribz.

We also picked up a quarter-pound of the peppered sausage ($4) and added a pair of sides for $2.50 each, settling on mac and cheese and coleslaw. Like seasoned actors, everything hits its mark. The sausage pumped out peppery flavor from each bite, and we kept alternating spoonfuls of the cheesy elbows with the creamy and well-seasoned slaw.

Eager to try more meats, we also built our own two-meat sandwich with jalapeño-cheddar and pulled pork, which comes with a side for $14. The pulled pork was juicy and tender, and hit with Reed's homemade sauce for some added zing. The jalapeño-cheddar sausage starts off savory before the jalapeño heat hits the roof of your mouth like a spicy uppercut, while the baked beans we picked for the sandwich side were thick and savory, with bits of chopped onion and meat mixed in. We finished our meal with a cool and airy banana pudding ($3) with vanilla wafers that teetered on crunchy and soggy, just the way we like it.

It remains to be seen how the location works out, but Stiky Ribz could be just what Greenville Avenue needs in a barbecue joint: solid Texas barbecue without much glitter. That's exactly what Reed has in mind.

"We're pretty simple. We do five meats and four sides, and it all has to be good," Reed says. "It's traditional Texas barbecue. We're not doing anything crazy."

Stiky Ribz Texas BBQ, 1916 Greenville Ave. ( Thursday-Sunday, 11 a.m.-9 p.m. or until sold out)
KEEP THE DALLAS OBSERVER FREE... Since we started the Dallas Observer, it has been defined as the free, independent voice of Dallas, and we'd like to keep it that way. With local media under siege, it's more important than ever for us to rally support behind funding our local journalism. You can help by participating in our "I Support" program, allowing us to keep offering readers access to our incisive coverage of local news, food and culture with no paywalls.
Make a one-time donation today for as little as $1.