All the Way from Memphis, Gus's Adds to Dallas' Growing Tennessee Chicken Feast 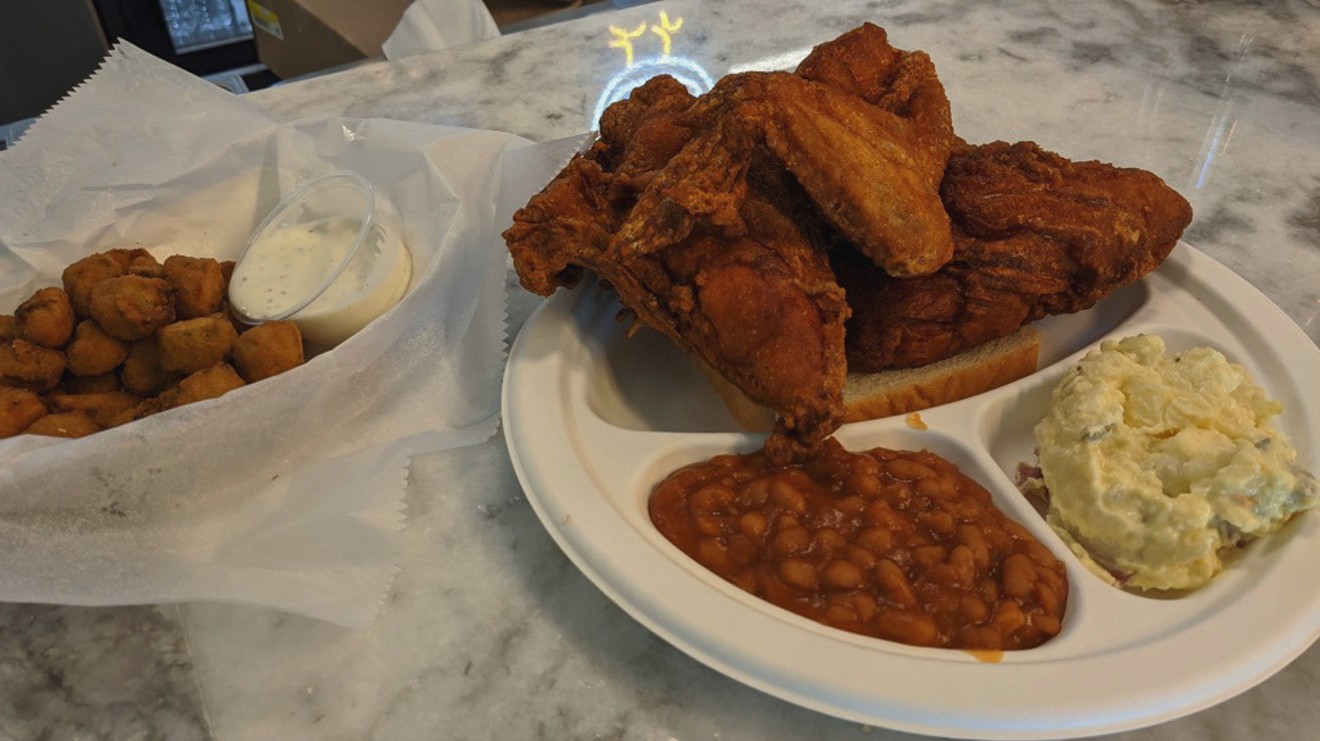 Gus's proves you don't need to be set aflame to enjoy spicy chicken from the Volunteer State. Steven Monacelli
The number of fried chicken restaurants in Dallas has grown, particularly those of the Nashville hot chicken variety. But if you thought Dallas didn’t need another fried chicken joint, you’re wrong. There’s no such thing as too many. To prove it, we tried out Gus’s World Famous Hot and Spicy Fried Chicken during their soft opening this week in Deep Ellum.

It’s often said that birds of a feather flock together, but don’t think Gus’s is just another Nashville hot chicken spot. This spicy chicken joint originally hails from Memphis, and the chicken is a milder distant cousin of the flaming hot Nashville variety that has roosted in Dallas.

The Deep Ellum location is the latest outpost of the Memphis chain whose roots go back to a 60-year-old recipe created by Napoleon “Na” Vanderbilt in Mason, Tennessee. Originally sold out of Maggie’s Short Orders — named after Na’s wife — the recipe was passed on after the death of Na Vanderbilt in 1983, as was the restaurant. Na’s only son, Vernon “Gus” Bonner, reopened the restaurant to sell the family recipe under the now well-known name in 1984. Eventually, the chain spread to Memphis in 2001, and since then has opened over 30 locations across the country.

Love me tenders ... naturally the home of Elvis knows how to do them right.
Steven Monacelli
The Gus’s in Deep Ellum is housed inside an old garage that sits next to the offices of Whiskey and Weed TV on Commerce Street. The large Deep Ellum mural on the building facade has been preserved, minimally affecting the overall ambiance of the area. The interior of the building screams Southern retro. Red checkered tablecloth top the tables, while neon signs and vintage posters line the walls. Much of the original brick walls, which are an unusual teal color, and exposed metal supports have been retained. Small touches accentuate the vibe, like the old metal siding that lines the exterior of the stately marble top bar.

A number of aspects distinguish Gus’s Memphis style from the flaming hot Nashville styles. Most apparent is the heat level. While other hot chicken joints like Lucky’s offer a range of heat options, from not-at-all to burns-for-days, at Gus’s there is only one way to order it — how it’s always been made. But if you’re afraid of heat, don’t that stop you. The chicken is relatively mild while retaining a satisfying spicy flavor.

We tried the three tender plate ($9.25) as well as the three-piece bone-in plate ($11.75). Both the tenders and the bone-in chicken were incredibly crispy, juicy and flavorful, but there is a suitable difference in the flavor that's likely to do with differences in the brining and marinating process. Ultimately, the tenders were a bit more mild and buttery in flavory than the bone-in chicken, which provided a bit more of a kick. And no matter how you order it, all the chicken comes laid out on white bread as it has done for decades. 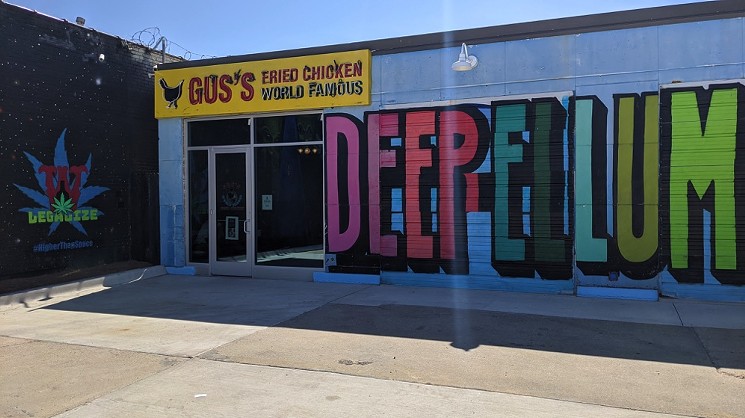 Gus's fit right in Deep Ellum.
Steven Monacelli
All plates are paired with the standard beans and slightly sweet coleslaw, which helps offset the spice of the bird for those with more sensitive palettes. A small upcharge of 50 cents allows for the substitution of other sides, like the potato salad, which came out smooth, cool and creamy. Other options include mac & cheese ($2.75), greens ($2.75) and seasoned fries ($4.50).

Additional appetizers are also on the menu if the sides aren’t enough to hit the spot. The fried okra ($5.75) was delightfully crunchy and paired well with a lightly spiced ranch. Fried pickle spears ($6.50) and fried green tomatoes ($6.50) are also available. Beers can be ordered for dine-in, and Deep Ellum Brewing’s IPA was exactly what was needed to wash it all down. If you have a sweet tooth, they also have slices of classic Southern pie ($2.95) and root beer floats ($3.50).

Gus’s World Famous Hot & Spicy Fried Chicken, 2904 Commerce St. (Deep Ellum). Open 11 a.m. to 9 p.m. every day.
KEEP THE DALLAS OBSERVER FREE... Since we started the Dallas Observer, it has been defined as the free, independent voice of Dallas, and we'd like to keep it that way. With local media under siege, it's more important than ever for us to rally support behind funding our local journalism. You can help by participating in our "I Support" program, allowing us to keep offering readers access to our incisive coverage of local news, food and culture with no paywalls.
Make a one-time donation today for as little as $1.