An Amaro Bar Hidden in a Bar Hidden Inside Another Bar: That's Pony Tail 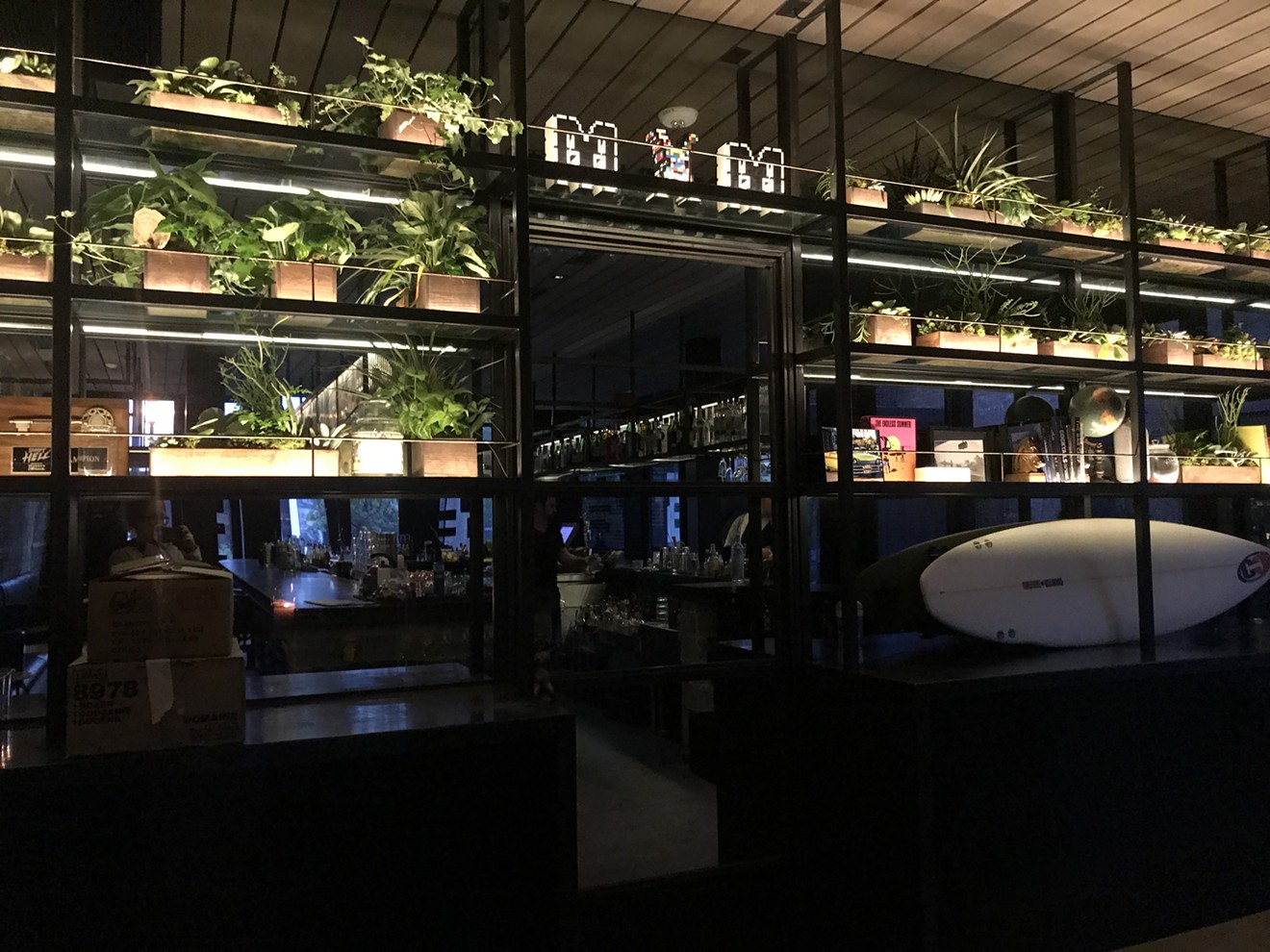 Behind this door, you'll find Deep Ellum's best-kept cocktail secret: Pony Tail, a tiny amaro bar that's only open a few hours a week. Beth Rankin
It sounds complicated, but try to follow along: Harlowe MXM, a sleek Deep Ellum bar and restaurant with multiple levels and a massive rooftop patio, has its own "hidden bar" located right next door: Trick Pony, which operates on limited-run novelty cocktail menus with themes like Bill Murray. Trick Pony doesn't have any signage, but it's not hard to find if you're standing in front of Harlowe (it's to the left). But Trick Pony has its own surprise: Pony Tail, an amaro bar hidden behind a mirrored wall in the back.

Here's how it works: Visit Trick Pony between 8 p.m. and 2 a.m. on Fridays and Saturdays and head straight to the back. You'll see a mirrored wall and a glowing "MXM" sign. Under that sign is a door, and behind that door, a tiny, dark bar with no seats, no menu and room for, at most, 10 or so people. There's no vodka, no cocktail shakers and you're not gonna find any of Dallas' favorite cocktails — for margaritas and Moscow mules, you'll have to go somewhere else.

Welcome to Pony Tail, where amaro is king.

It's dark in here, but there's plenty to drink — and you can order food off Harlowe MXM's menu.
Beth Rankin
The Russian nesting doll of Dallas cocktail bars, Pony Tail used to be a closed-off prepping space but got its hidey-hole makeover this summer. Since June, the bar's been slinging one of the hottest things in American cocktails: amaro.

You may think you've never had an amaro before, but you'd be wrong. Fernet-Branca, Camari, the Aperol in that Aperol spritz you sipped all summer at damn near every bar in Dallas — amaros are a broad category of often (but not always) bitter herbal Italian liqueurs. And they're all over your neighborhood cocktail menu right now, thanks in part to Brad Thomas Parson's 2016 love letter, Amaro, a book that explored this versatile spirit's many strengths. Traditionally used as aperitifs and digestifs, amaros fit into several trends in cocktails: They're more bitter than sweet (though they can be that, too), and they tend to show up in cocktails with a lower ABV. From dark, medicinal amaros that make you want to curl up in front of a fireplace to light, bright, citrusy options that make for perfect summer spritzes, it's a versatile category of spirit — and Pony Tail is all about it.

"People think amaros and yes, Italy is the first place that comes to mind ... but we wanna incorporate all of the iterations," says Ricky Cleva, bar manager at Pony Tail. At this bar, you're encouraged to chat with your bartender rather than hide behind a lengthy cocktail menu.

From lighter, citrusy amaros to deep, herbaceous, warming iterations, there's a lot to explore in the amaro realm.
Beth Rankin
"There are no shaken drinks, no juice, just stirred drinks [served] up or at room temp," Cleva says. "No martinis, no margaritas. That’s what we’re shooting for — to elevate the Dallas community as to what’s available right now in spirits."

A night at Pony Tail is an education. Bartenders will lead you through a tasting of various amaros, some served room temp with nothing more than an orange peel to brighten the flavors. There are cocktails, oh yes, but you won't get that cocktail without a conversation.

"I’m all about bars that don’t have menus, but you gotta have good bartenders," says Rob Albright, another Pony Tail bar manager.

Have no idea what to drink? Just talk to the bartender and let them take you on a wild ride.
Beth Rankin
In that respect, Pony Tail works. Albright and Cleva are the perfect spirit guides for a type of spirit Dallas may not be hip to just yet, and you'll leave with a newfound appreciation for an age-old spirit that has often throughout history been thought to have medicinal properties. And since many amaros aren't so heavy on the alcohol, you may even leave with your wits about you.

"What’s nice is you can sip a couple, y'know, and you’re not done," Albright says.

If you've been sipping a few extra negronis and Aperol spritzes lately and find yourself thirsty for something on the bitter end of the spectrum, Pony Tail is the perfect bar for you — if you can find it.

Pony Tail, located inside Harlowe MXM's Trick Pony, 2823 Main St. (Deep Ellum)
KEEP THE DALLAS OBSERVER FREE... Since we started the Dallas Observer, it has been defined as the free, independent voice of Dallas, and we'd like to keep it that way. With local media under siege, it's more important than ever for us to rally support behind funding our local journalism. You can help by participating in our "I Support" program, allowing us to keep offering readers access to our incisive coverage of local news, food and culture with no paywalls.
Make a one-time donation today for as little as $1.