‘Normal’ Beer Styles Are Trendy Again in Texas, and We Couldn’t Be Happier

I’m grateful all those brews exist, and have enjoyed pints of many of them. I bought two bottles of the beet ale, which comes from Austin’s Jester King.


The most exciting trend in the Texas beer world these days is that, at long last, “boring” beer is popular again.

But sometimes, I just want a damn beer.

You know the kind I’m talking about. Beer that tastes like beer. Beer that you’d reach for after mowing the lawn or calling the cable company. Beer for sitting on the patio or watching a baseball game. Good old, regular, plain, normal, boring beer.

The most exciting trend in the Texas beer world these days is that, at long last, “boring” beer is popular again. Brewers and bartenders alike are devoting more resources to vanilla pints — and for once, that doesn’t mean a stout brewed with vanilla beans. It turns out that for most of the past decade, a lot of us followed the new fads but secretly wanted regular ol’ barley water the whole time. 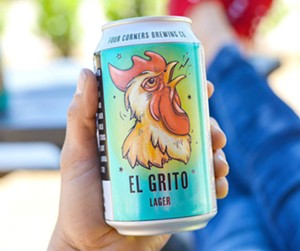 If any one brewery in Dallas could be said to lead the charge toward drinkability, it’s Pegasus City, the defiantly anti-trendy space in the Design District that turns out impeccable renditions of classic styles. Consider the proudly square descriptions of Pegasus City’s best-selling brews: English mild ale, black lager, porter, amber. Even a relatively innovative pint like the Woofus comes from an attempt to bring together the most drinkable aspects of other styles — in Woofus’ case, the drinkability of a kolsch and the thickness of a cream ale.

“The classic styles, while being relatively simple and not flashy, to do one well is still a job,” Adrian Cotten, part-owner, told me in an interview last year. “It’s still a reason for a brewmaster to be around.”

Last summer Four Corners Brewing Co. rolled out a small-batch pilot test brew in the taproom with a very modest ambition. Called “Corn Water,” its full menu description read, “Beer flavored beer for all your beer-drinking needs.” Corn Water was an instant hit, drawing Untappd reviews like “exactly what it should be,” “classic beer with better ingredients” and “simple classic play on a domestic.”

Now Corn Water is Four Corners’ fastest-growing brew. It’s been renamed El Grito and packaged in eye-catching cans, but it’s still beer-flavored beer for all your beer-drinking needs, and it roundly outclasses a similar American lager from the now-closed Noble Rey Brewing. In fact, El Grito reminds me more of Mexican light beers like Pacifico than the slightly skunky American varieties.

The front of Pegasus City Brewery in the Design District
Brent Nuss
“El Grito was born on the pilot system as a straight up American adjunct lager called Corn Water, ’cause that’s what it is,” says Four Corners business manager Zach Christensen. “And now, it’s our production beer. Within two years it’s gonna be our No. 1 SKU. I guarantee it. It’s beer-flavored beer, dude.”

Christensen recently saw the power of beer-flavored beer up close at a festival in Los Angeles. “A couple weeks ago I was in LA doing our launch out there,” he explains. “Everybody advertised milkshakes, hazys, West Coasters. I was like, here’s a lager and an IPA. Deal with it. People loved it.”

Alongside El Grito and Pegasus City’s Woofus, another six-pack has been in steady supply in my house all spring long: Manhattan Project Beer Company’s Necessary Evil pilsner. A lot of the Manhattan lineup focuses on hazy and milkshake IPAs, but Necessary Evil shines out like a boring, beautiful beacon. It has a floral aroma from hops, but the taste is pure sunlight and poolside refreshment. The hops provide the backbone of a serious beer, but the actual drinking experience isn’t serious at all.

“Necessary Evil is the beer that we’re the most proud of, because it took so long and so much obsessing over every detail to get it to where it is today,” says Misty Sanford, Manhattan Project co-owner. “It’s hard to hide off flavors and bad beer behind a lager, you know? There’s a lot of them out there that just aren’t good. It’s really hard to make a good lager.” 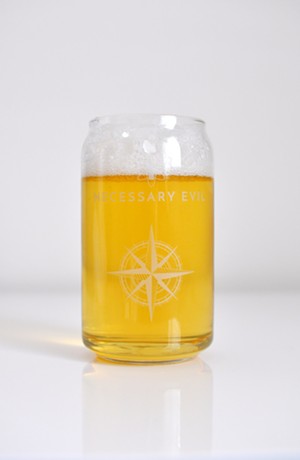 Manhattan Project's Necessary Evil pilsner
courtesy Misty Sanford
Sanford admits that she and her co-founders are major-league beer nerds; before getting into the business, she refused to drink lagers at all, and once sold a six-pack of lager at a garage sale for $1.

“I was doing it just to be a smartass, of course,” she admits. “It made a good Instagram.”

Now Manhattan Project’s owners are learning to be less snobby. They’re developing a German-style hefeweizen, which, like Necessary Evil, will be tailor-made to avoid the excess sweetness they dislike in some American brands.

Asked to describe Necessary Evil, Sanford laughs. “This is a beer you drink. It’s not a beer you hem and haw over. People just start to take beer too seriously, they try to detect the flavors. No. This is a drinking beer.”

Over in Fort Worth, another brewery takes lagerphilia to new heights. Cowtown Brewing — which doubles as a Central Texas-style barbecue restaurant — pours pints of Dortmunder, Mexican-style and Vienna-style lagers, plus a kolsch, a maibock and an altbier.


Dallas-area breweries are proving that normcore beer doesn’t have to be dull after all.

“I got into craft beer kind of backwards from a lot of people,” says Cowtown head brewer Shawn Kidwell. “Growing up in Texas, I was a Shiner Bock drinker and didn’t know much outside of that and your Lone Stars and your Budweiser. Then I moved to an area that was about 60 miles outside of Chico, California. Everybody was drinking Sierra Nevada Pale Ale.”

Kidwell’s introduction to craft beer continued in a similarly “backwards” fashion: First he got into wine, before falling hard in love with lager on a trip to Bavaria and Austria. Cowtown brews some ales in American styles, but its main goal is to create always-fresh versions of the beers Kidwell loved in Europe.

“I think that the perception of them being ‘boring’ goes back to a lot of American beer drinkers experiencing lagers in less than ideal conditions,” Kidwell says. “They’re drinking imported lagers that have come over on a boat, they sat on a loading dock, they sat on a truck, they sat on a shelf — if they’ve bothered to date the beers at all, they’re months old by the time that you got your hands on them. They’ve faded, the hop character’s faded.” Bonus mini-review: Cowtown Brewing's brisket and skillet potatoes are solid, but the real star is the baked beans stewed with big chunks of fatty brisket.
Brian Reinhart
Of the four Cowtown beers I tried on a recent visit, all four are clean, easy drinkers with bone-dry finishes and a gentle but thrilling edge of hops. The kolsch is almost austere in its Germanic precision; the cloudy Dortmunder lager, Johnnie’s High Brau, was so quaffable that I bought a crowler to take home.

“Not to take away anything from the hundreds of world-class ales in the beer world, but lagers take a little more effort to create,” Kidwell says. “They take a little more time to ferment, there are some active decisions that need to be made.”

Kidwell says that his goal is to “erase that ‘boring’ tag that a lot of people have on lagers.” Mission very much accomplished.

“In my fridge right now there’s Coors Banquet,” Christensen says. “I’ve converted a produce drawer into something that holds 18 Coors Banquets. If I’m around the house working on an armoire or gardening or whatever it may be, that’s what I’m drinking. I’m not gonna drink this syrupy milk stout and get tanked before I’m halfway done with my project.”

As the weather gets hotter and the thought of driving home from work in a million-degree steel box becomes ever less bearable, I’m going to be filling my fridge with plain old regular beer. Dallas-area breweries are proving that normcore beer doesn’t have to be dull after all. El Grito, Woofus, Necessary Evil, Johnnie’s High Brau: That’s a lineup anybody should be excited to jump into. Especially if they’ve just mown the lawn.
KEEP THE DALLAS OBSERVER FREE... Since we started the Dallas Observer, it has been defined as the free, independent voice of Dallas, and we'd like to keep it that way. With local media under siege, it's more important than ever for us to rally support behind funding our local journalism. You can help by participating in our "I Support" program, allowing us to keep offering readers access to our incisive coverage of local news, food and culture with no paywalls.
Make a one-time donation today for as little as $1.