The wing supply is tight these days. Lauren Drewes Daniels
You've likely seen the commercials by now. The ones with Rick Ross eating a chicken thigh from Wing Stop promoting that they now sell chicken thighs due to a wing shortage. National chains are hurting due to supply disruptions causing many shortages. Despite the Rick Ross opulence shown in the ad, these shortages and supply-chain issues are significant and widespread.

And it's not just the national chains. You may have noticed some changes at your favorite local restaurants, coffee shops and dessert bars. Price increases or limited supplies on certain menu items are becoming the norm. So, what's the deal? Well, supply and demand is getting hit by the COVID-19 crisis, just like almost everything else. Many restaurateurs might have managed to keep their doors open last year, but now they continued to get pinched in other ways.

"Protein cost is all the way up," says Brent Reaves. He and his brother Juan own Smokey John's Bar-B-Que. The sale of ribs keeps their lights on and doors open, but the wholesale price is biting into their profits.

"Two months ago ribs were $2.62 a pound. Ribs are now $5.96 a pound. That's double, more than double. It's all the way around. Chicken has gone up. Brisket prices have skyrocketed," Reaves says.

This one hurts; the wholesale price of these ribs from Smokey John's Bar-B-Que has more than doubled in just two months.
Alison McLean
So why is this happening, and how is COVID-19 putting a snag in how you get food on your plate? According to WhiteHouse.gov, as the economy strengthens and the country opens back up, demand for products is outpacing manufacturers’ ability to produce enough supply. Companies are also paying more for shipping as fuel costs rise, and ports experience longer delays because of congestion.


As more of us get vaccinated and get comfortable getting out again and more often, there has been a surge in demand for meals at restaurants, ballparks and other venues. This new sudden demand has caught food producers and suppliers off guard.

Congestion in the pipeline to get their product is something that Reaves knows all about. "The biggest issue we have is suppliers are not getting all of their supplies in," Reaves says. "We buy domestic catfish because it is a higher quality, a higher grade fish, and our suppliers are struggling to keep the fish in. The harbors are backed up for ships. The trucking areas are backed up."

Smokey John's is hardly the only food purveyor to struggle with food prices and shortages amid the ongoing coronavirus pandemic. Owner of Val's Cheesecakes, Valéry Jean-Bart, is having his share of struggles as well, as he tries to keep his business in the black.

"Produce, frozen strawberries are a hit and miss. I'm told 'We're out of peaches and we're out of this and this and this.' So, you have to find it where you can get it," Jean-Bart explains. "So, it's more conversations with suppliers, more research, more coordination."

It's such a problem that the next time you go to Val's Cheesecakes you may notice some differences. "I'm killing flavors left and right," Jean-Bart says. "I've removed the Nutella. Nutella is hard to find in the tubs. Sometimes they have it, and sometimes they don't. I'm about to implement a lot of changes in terms of hours and menu." 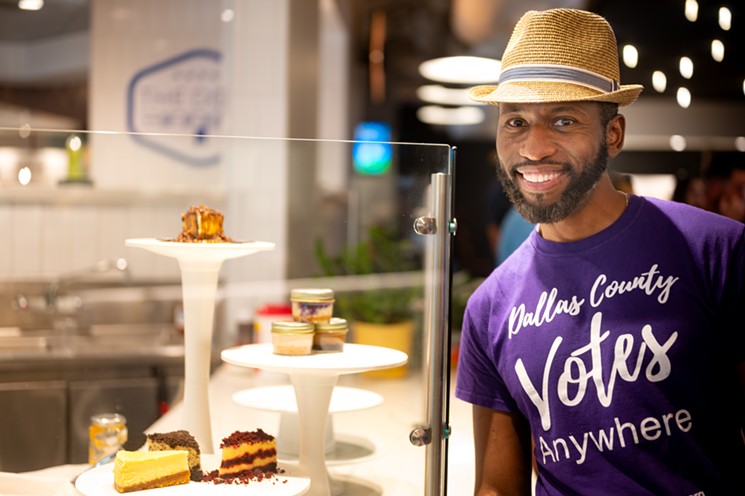 Valéry Jean-Bart of Val’s Cheesecakes has struggled to not only maintain a full staff, but also a full stock of goods.
Mike Brooks
Another factor affecting supply and demand is not enough manpower to handle the workload. Many manufacturers are still understaffed as employment lags the broader economic recovery. It's a problem Reaves has heard about from suppliers. "They can't find workers," Reaves says. "If you can't find workers, then you can't produce products. You're going to have a loss of supplies."

In May, according to a National Federation of Independent Business' survey, unfilled job openings increased from 44% to 48%.

Jean-Bart is hearing the same complaints and he now has to make up for the loss. "The supplier is having staffing issues. Now, the supply chain is hit. Now, we can not find enough [cheesecake] plastic containers. We're running around town trying to find them. So we're running around, and it reduces the amount of baking we can do. When you reduce the amount of baking time, it reduces what you can have on your menu. Once you've hit your menu, you're not able to provide what you could provide. Your revenue is hit.

These issues are forcing the Reaves brothers to try to hunt down deals and new suppliers to stay competitive in a city that sells a lot of barbecue. "We have one specific provider and now we're looking for other providers to see if their stock is up for fish," says Reaves.

The worry for the Reaves and Jean-Bart is passing the cost on to consumers. "It's hitting us and now we're having to share the cost, well the loss, really, with the customer. We're trying not to go up too much to price ourselves out of the market but at some point, we have to go up," says Reaves.

"There's an increase in cost to the product that's going to have to happen," says Jean-Bart.

The expectation is that the market will eventually even out, but how long that could take and the impact is unknown.
KEEP THE DALLAS OBSERVER FREE... Since we started the Dallas Observer, it has been defined as the free, independent voice of Dallas, and we'd like to keep it that way. With local media under siege, it's more important than ever for us to rally support behind funding our local journalism. You can help by participating in our "I Support" program, allowing us to keep offering readers access to our incisive coverage of local news, food and culture with no paywalls.
Make a one-time donation today for as little as $1.