Crème brulée. A bit boring, perhaps, but well done nonetheless. Hank Vaughn
Restaurant Week is a trifecta of wins: Restaurants offer what feels like matinée pricing; we get a great meal; and a donation goes to a charity. It's still not necessarily cheap ($24 per person for the lunch special, which is the cheapest deal) but it's better than normal — supposedly, anyway (keep reading). Sure, you have a certain menu to order from, but it's in the best interest of the restaurants to go all out for their patrons.

And in this case, a portion of our dining dollar goes toward two rather important local charities: the North Texas Food Bank and the Lena Pope foundation, which works with young people in Tarrant County. Further, we can discover new restaurants that we might not have tried otherwise.

Places like Ventana Grille in Mansfield, south of Arlington. Using the map function on the Restaurant Week site we searched for a new place in that vicinity and this country club spot popped up. We drove south, past fields of parched grass and a bunch of mesquite trees, and discovered a golf course and country club, where we were literally the only visitors on a Tuesday at lunch.

Ventana Grill, at the Tierra Verde Golf Club, has a large, spacious dining room with lots of windows, naturally. We seated ourselves, per a sign at the door, and our server arrived in about a minute. She asked if we had reservations and after a giggle — there was no one else in the facility and there is no way to make a reservation on their website — we realized she was being serious and just said, "No," but had to ask, "Did we need one?" She assured us we did not.

The two-course, $24 lunch offers three courses to choose from. So, you can get an appetizer and main or a main and dessert.

Chunks of tomatoes were lazing at the bottom of this bowl, adding some nice texture.
Lauren Drewes Daniels
We started with a stellar tomato basil soup topped with Parmesan and speckled with a few chunks of tomatoes that were added back after the otherwise-silky smooth soup was blended. Both texture and flavor were great. That there hanging off the burger, Clark, is one of two thick slabs of candied bacon.
Lauren Drewes Daniels
That was followed by the quite amazing Ventana Burger, with thick slices of candied bacon over white cheddar and caramelized onions. This was a burger that was worth driving out of the way for. The candied bacon alone could put that parcel of manicured grass on the map. It came with shoestring fries, which were good. No complaints here: a solid tray of nachos.
Lauren Drewes Daniels
We also tried another lunch week combo: a sheet tray of nachos topped with queso and shaved steak as a starter and a burger. The nachos could be a meal alone. It was a big, albeit standard, no-complaints-at-all pile of meaty nachos. 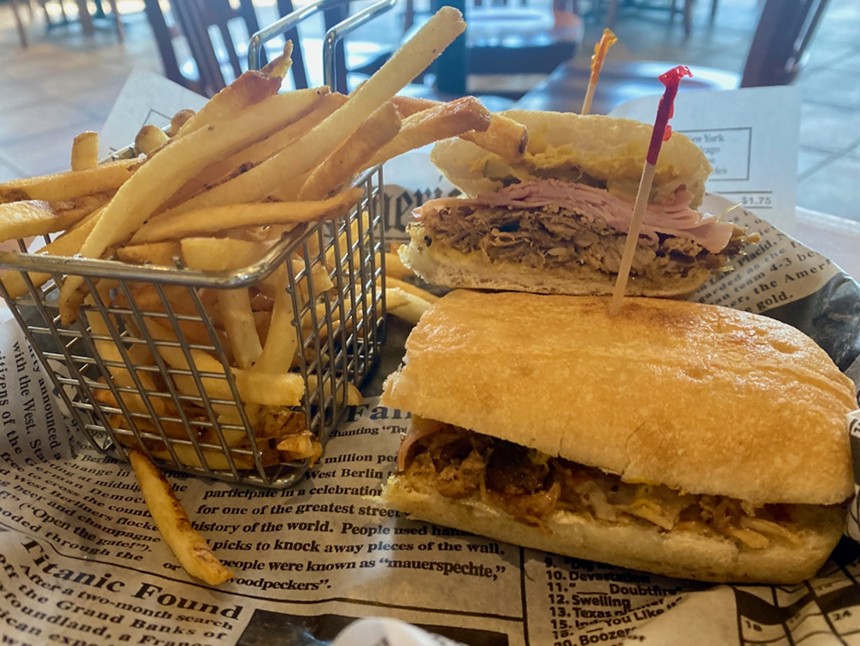 The Cubano at Ventana.
Lauren Drewes Daniels
The second part of that meal was a Cuban sandwich, which wasn't as great as some that we've had around town, just a bit more basic and a little heavy on the mustard. It came on a pressed hoagie, which was in fact pressed and crisp.

Interestingly, this particular meal costs less on the restaurant's regular menu than it did during Restaurant Week. In all fairness, the difference was only $2, and had we gotten a drink (we had water), it likely would have been even.

But then there wouldn't be a donation to one of the worthy causes. And we wouldn't have discovered that candied bacon cheeseburger. Or that amazing tomato basil soup.

Of course, Restaurant Week also offers dinners, which naturally cost a bit more than lunch at either $39 or $49 per person for usually a three-course meal. Corrientes 348, in the heart of downtown Dallas, is an Argentinian steak house, and its Restaurant Week menu offers a choice of two starters, three entrees, two sides and two desserts. The friendly staff asked us our seating preference, and we took a cozy table by the window that was bathed in the beautiful golden hour sunlight. Since there were two in our party, we got to try all the starters, sides and both desserts, as well as two of the three mains.

Arroz parrillero and pure de papas were both huge side dishes.
Hank Vaughn
What's more, the serving sizes were huge. Either of the sides could have fed four people, and we had two of them: the pure de papas were smoothly mashed potatoes with garlic, pepper and Parmesan. The arroz parrillero was rice with pork sausage bites and eggs topped with shoestring potatoes. It came across as an extremely unique fried rice, the lovely crunch of the shoestrings providing a nice contrasting texture. The starters were a beef empanada and a Juliana salad, with iceberg and hearts of palm. Both were fine if not spectacular.

Tapa de caudril, 12 ounces of perfectly grilled sirloin.
Hank Vaughn
For mains we selected the salmon parrillero, a grilled fillet served on grilled onions with capers that was firm but not overcooked and piquant, and the tapa de chuadril, a 12-ounce sirloin steak with chimichuri sauce. The steak seemed larger than 12 ounces and was in two pieces, making the perfectly cooked and tender dish easy to share.

The dessert choices were blueberry créme brûlée and panqueque de dulce de leche (a crepe filled with dulce de leche served with ice cream), which were a nice end to a filling meal. Did we mention the portions were huge? It's great when Restaurant Week can become Restaurant Heated Over Leftovers Days as well. All in all, about $20 more toward the North Texas Food Bank. Win-win.

Restaurant Week runs through Sept. 4. You can find all of the specifics and dates on the FAQ page. According to their website, this event has raised more than $8.3 million over the last two decades, which translates into millions of meals for local families and thousands of counseling sessions.
KEEP THE DALLAS OBSERVER FREE... Since we started the Dallas Observer, it has been defined as the free, independent voice of Dallas, and we'd like to keep it that way. With local media under siege, it's more important than ever for us to rally support behind funding our local journalism. You can help by participating in our "I Support" program, allowing us to keep offering readers access to our incisive coverage of local news, food and culture with no paywalls.
Make a one-time donation today for as little as $1.