Everything at Reverie is vegan, and the Richardson bakery also specializes in gluten-free and raw baked goods. Courtesy of Reverie

The DFW vegan food scene has come a long way since Spiral Diner & Bakery paved the way with their first location in Fort Worth 15 years ago. Spiral Diner eventually expanded into Dallas and soon Denton, and V-Eats, the high-profile Trinity Groves restaurant that opened last year, has become famous for creating meat-like proteins from plant-based ingredients.

But what about vegans with a sweet tooth? Take cakes as an example. The Oxford Dictionary defines cake as “An item of soft sweet food made from a mixture of flour, fat, eggs, sugar, and other ingredients, baked and sometimes iced or decorated.” Animal fat – i.e. butter – and eggs are not on any strict vegan's list of acceptable eats.

At Reverie Bakeshop in Richardson, vegans will find pastry cases packed with cakes, cookies, doughnuts and much more, but nowhere in the shop will you find a carton of cream, a stick of butter or a single egg. That’s because since September 2013, the small boutique bakery has been supplying DFW residents with vegan treats as the area’s first and only plant based, all-vegan bakery.

While all products at Reverie are vegan, many options accommodate gluten-free and raw diets as well. Gearing a business in such a traditionally non-vegan segment of the food industry such as pastry may seem risky, but for the shop’s owners, Nancy Castillo and Racene Mendoza, the philosophy behind their business was never a question.

“There was never a doubt in my mind about opening a vegan bakery,” Castillo says. “It was more about where to settle with this idea. DFW just happened to be advancing so quickly in the pastry world, more than other major cities I felt. It was shocking that there wasn't already a vegan bakery storefront somewhere in the metroplex.”

Castillo, who grew up in Laredo, delved into veganism after reading some leaflets she got at a hardcore punk show.

“Veganism challenged everything, with good reasoning, including my own spirituality. It took setting aside my greed, excuses and habits in order to become this person I aimed to be,” she says of the lifestyle she has maintained for over a decade and a half, and which first led her into the field of baking. “Sixteen years ago, becoming vegan was not an easy feat. Vegan products were not as easily accessible as they are today and vegan cookbooks were slim to none. Experimenting with recipes flourished into a passion for vegan pastry. The concept of baking was different from that point on. It was a new art for me, involving so much chemistry and political implication. Creating something delicious and daring, my teenage-self became hooked.” 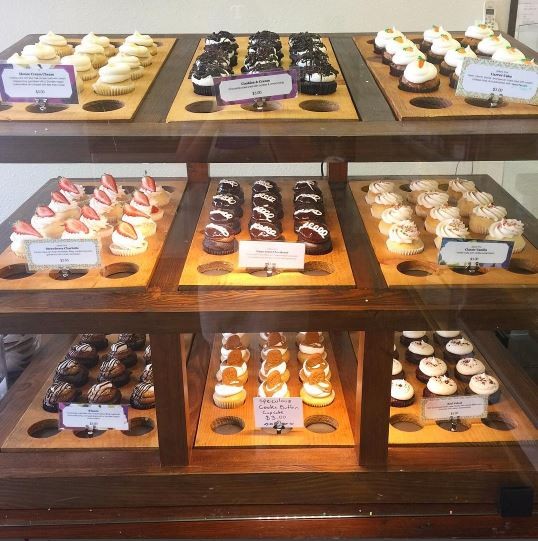 Courtesy of Reverie
Castillo and Mendoza met at a potluck through mutual friends. Castillo came with a vegan pie and the pair hit it off over conversations about cake decorating. At the time, both were operating small baking operations out of their homes and they began sharing the workload between them.

“When our orders began to take over our full-time jobs, the next step was obvious,” Castillo says.

The pair was familiar with the Richardson area thanks to their affinities for the nearby Sprouts and Natural Grocers. They were also confident they knew just how to serve their market thanks to their active involvement in the local vegan scene. So, when they saw the neighborhood begin to go through some changes, they decided to become a part of it.

Since then the tiny shop has been putting out big flavors including everything from cinnamon rolls ($3.50) to vegan kolaches ($3.25) and gluten-free doughnuts ($2). Some of the shop’s best-sellers such as sopapilla cheesecake bars ($3.00), s’mores cupcakes ($3) and cannolis ($4) are so popular, you won’t find them in the case by the end of the day. In addition to what’s available in the display cases, the shop also does custom jobs like gorgeous, artfully decorated wedding cakes.

The shop provides their employees with the unique opportunity of working in an environment that is not just accepting of but accommodating to their dietary choices and needs. 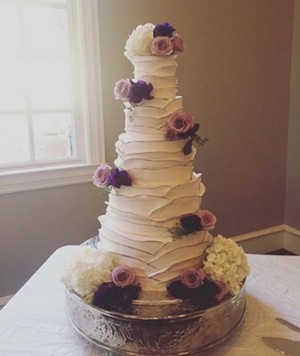 Reverie also bakes up custom vegan cakes for weddings and events.
Courtesy of Reverie
“Some of our staff are vegan, and most of them were seeking an all-vegan work environment,” explains Castillo, who knows all too well the struggles of having to work in traditional bakeries, operating outside of the contexts of her lifestyle, in order to nourish her passion and advance her career.

“Although the pastries and work tasks were a great learning experience, it was extremely uncomfortable working with non-vegan ingredients,” she recalls. “The food industry is a fast-paced relay. You learn what you can and strive for the next biggest step. In rational terms, the experience was essential before diving into something of my own.”

Of the shop's clientele, Castillo estimates that about half of them are vegan but says that many of their guests have allergies to dairy or eggs, adopt vegan diets while fasting or are simply wanting to try something new. Dietary practices aside, the support of each person who walks through the door is what fuels the passionate folks running the show at Reverie.

“The positive mentality that everyone carries spreads more than they know,” Castillo says. “It keeps us going and it reminds us of the importance of community. Vegan or not, we are grateful for the support and willingness to try something new.”