After Catching Fire Over a Year Ago, Smokey John's BBQ Makes a Triumphant Return 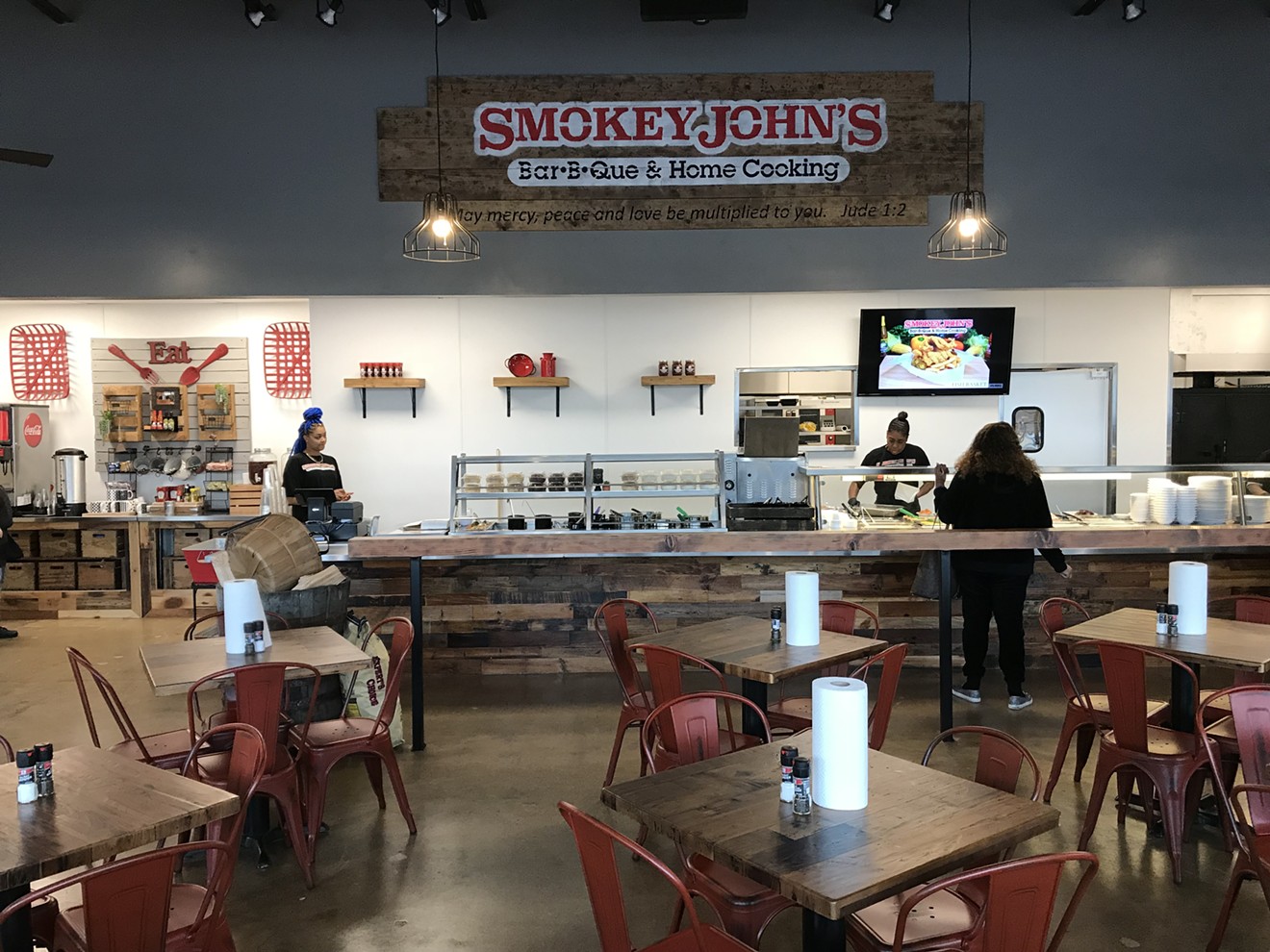 The newly renovated Smokey John's BBQ, which closed over a year ago after a devastating fire. Dalila Thomas
The storm is over. That’s what it felt like in Smokey John’s on the last Tuesday of January. Not just because the lunch rush had finally subsided, but because they were finally back open after 15 months. The restaurant, which had been closed over a year after a devastating fire, quietly unlocked its doors for a soft opening Monday and Tuesday. And Wednesday, the restaurant opened to the public.

“It was painful,” co-owner Brent Reaves admits. “The whole experience was painful. It’s just gut-wrenching. I think the biggest thing for me was my team. Juan and I made sure we kept them paid, because these guys have families.”

And it paid off, because those same faces greeted customers as they made their way inside the newly renovated establishment. You could see the excitement on Brent’s brother and co-owner Juan Reaves’ face as he pointed out some of the new additions.

Smokey John's three-meat plate is better than ever.
Dalila Thomas
“We have a room for tastings and a pickup counter now,” Juan explained before running off to take care of a catering order.

As it turns out, building from the ground up is a lot different the second time around.

“My dad did the first one, and I had just graduated college so I was coming straight into the family business,” Brent says. “But this time, my brother and I were general contractors throughout the whole project. We were able to go through the whole process ourselves and learn it. It seems like God breaks and tears stuff down and then builds it back stronger.” Smokey John's brisket sandwich
Dalila Thomas
Although the décor may have changed and some things have been added on, the food hasn’t lost its touch, and  the feeling of family remains.

“It’s like home away from home,” customer Margo J. Posey says. "I had to fly to Lubbock this morning. But as soon as I got off the plane, I came straight here. I got ribs, macaroni and cheese, cabbage and tasted the yams.”

Smokey John’s is set to throw a grand re-opening celebration on Feb. 16.

Smokey John's BBQ, 1820 W. Mockingbird Lane (Medical District)
KEEP THE DALLAS OBSERVER FREE... Since we started the Dallas Observer, it has been defined as the free, independent voice of Dallas, and we'd like to keep it that way. With local media under siege, it's more important than ever for us to rally support behind funding our local journalism. You can help by participating in our "I Support" program, allowing us to keep offering readers access to our incisive coverage of local news, food and culture with no paywalls.
Make a one-time donation today for as little as $1.
Dalila Thomas
Contact: Dalila Thomas