From 11-lb. Burritos to ‘Reaper Ramen,’ the Craziest Food Challenges in DFW 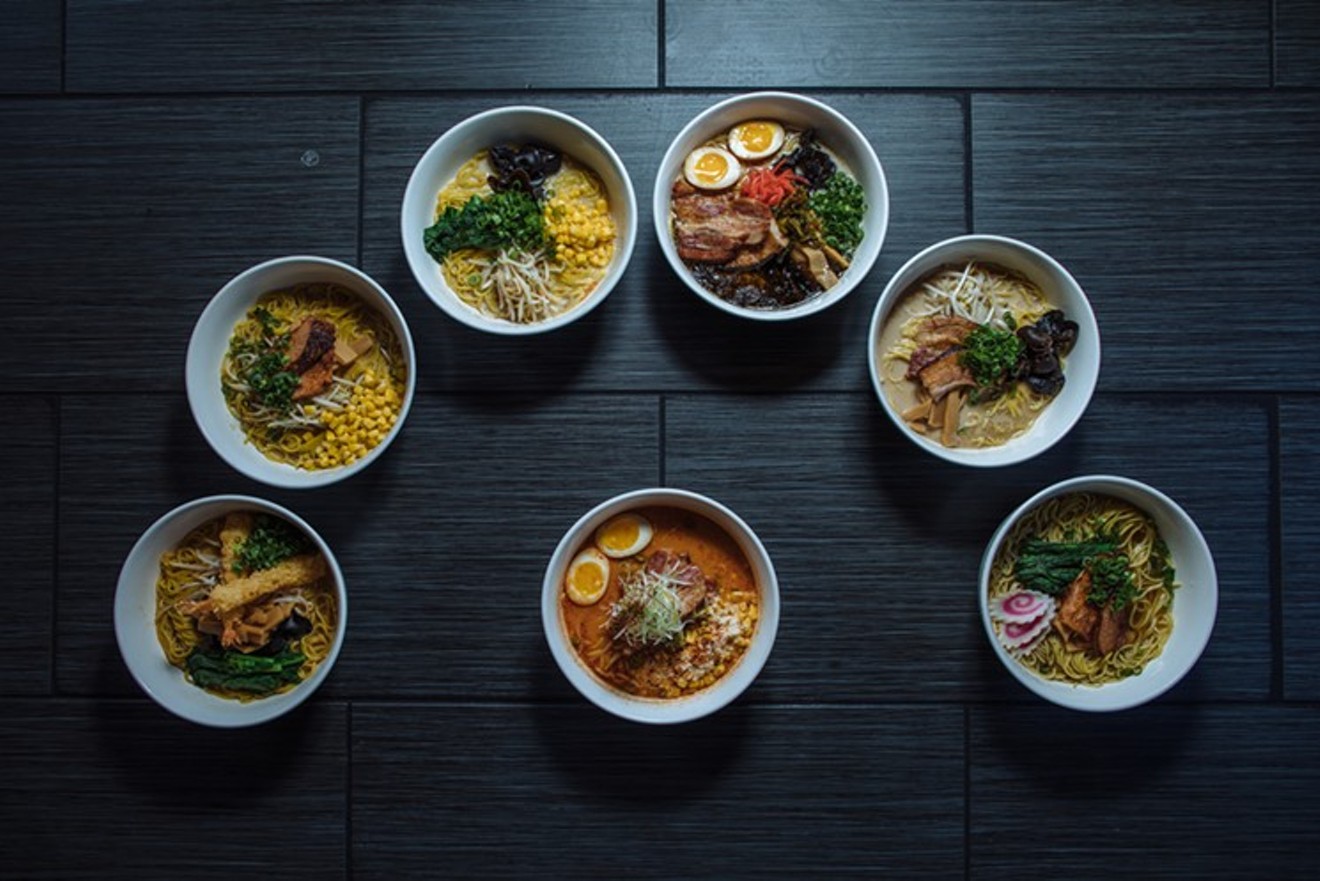 Oni Ramen's Reaper Ramen (center) is so hot, it comes with a challenge. Kathy Tran
Why eat when you can eat until you damn near hurt yourself? Texas loves a good food challenge, and some restaurants in DFW are home to some serious gastronomic feats. Whether it’s a test of quantity or heat, North Texas food warriors can put their stomachs and tongues up against local restaurateurs’ crazy creations. From giant bowls of pho to absurdly sized burritos, these portions are belt-busting, tongue-scorching and best suited for experienced eaters.

Bistro B offers one of the largest bowls of pho a diner could devour. Pho, pronounced "fuh," is a Vietnamese soup that generally consists of rice noodles, broth, herbs and beef or chicken. Bistro B serves an enormous pho bowl made with about 6 pounds of noodles and vegetables, and nearly 3 pounds of meat, clocking in at almost 9 pounds altogether. The dish is served in a ginormous 5-gallon bowl that looks to be the size of a kitchen sink. Anyone can take on this titan, but they have only 90 minutes to scoop and slurp up everything. If a challenger can finish the entire bowl within the time limit, they will receive a $200 Bistro B gift card, have their picture placed on the wall of fame and the huge meal is on the house. Only a couple of people have conquered this challenge.

Mosey on to Cowtown to tackle Texas’ original big stack flapjack challenge. Ol’ South Pancake House, a 24-hour diner, has served pancakes since 1962. Located on University Drive down the road from Texas Christian University, this legendary pancake house is home to many signature dishes and traditions, including the mega pancake challenge, one of the largest breakfasts in Texas. Ol’ South’s pancakes are huge. Each is a foot in diameter and weighs almost 1 pound. To win, a challenger must finish eight of them in under 60 minutes. One of these pancakes is equivalent to three, equaling about 24 pancakes total. Most challengers only get through two, but if someone is successful, they get a T-shirt and walk away with a free meal. This challenge is only available on weekdays.

Pluckers are all over DFW. The chicken chain first cooked up a slew of wing recipes at its first location in Austin. However, some might not know Pluckers dares diners to scarf down a huge plate of wings. These are no ordinary wings, but fiery hot wings made with five-alarm flavors. Contenders must eat 25 wings, either with bones or boneless, infused with Pluckers’ signature inferno-esque habanero-laden Fire in the Hole sauce. If a challenger triumphs, they receive a free Fire in the Hole T-shirt and are enshrined in the Texas-based wing emporium’s Wall of Flame.

Serious Pizza, Deep Ellum’s hub for plus-sized pizza, makes a thin-crust pie so big, a patron needs plenty of stomach room to feast upon it. Brave eaters can try Serious Pizza’s 30/40 challenge. The challenger has an hour to devour a 30-inch pizza and gulp a 40-ounce beer. Any contender or participants under age 21 can substitute beer with soda or water. As of today, no one has beaten this challenge, Serious says. 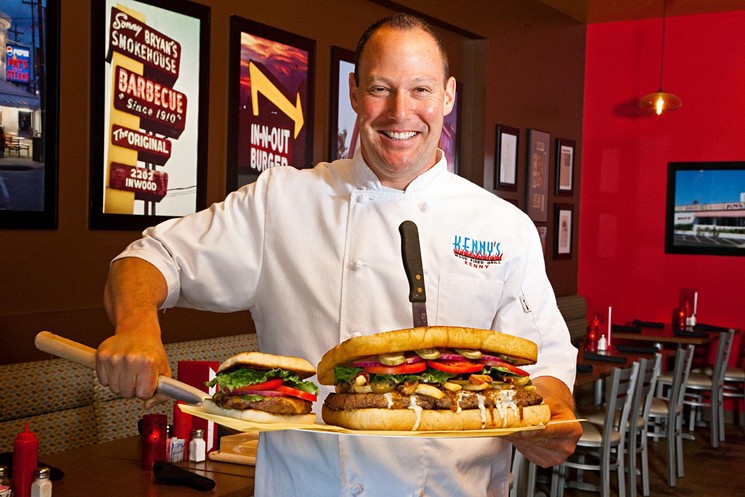 Meet the El Jefe Grande, which clocks in at more than 7,000 calories.
Courtesy Kenny's Burger Joint

With locations in Frisco and Plano, Kenny’s Burger Joint serves one mega burger concoction on a large skillet. Kenny’s El Jefe Grande Burger is loaded with 3-pound beef patties, chili, queso, half a pound of bacon, fries, lettuce, onions, sliced pickles and tomatoes stuffed between a massive ciabatta bun. The total weight of Kenny’s beefy behemoth is 7 pounds, with more than 7,000 calories. The $50 burger is on the house if one can scarf it down within an hour. Plus, a winner will receive a $100 Kenny’s gift certificate, a T-shirt and they will become a permanent fixture on Kenny’s wall of fame. In 2010, Pete MacGillis of Dallas became the first challenger to wolf down the El Jefe Grande in under an hour, according to The Dallas Morning News. Hundreds of people have tried to chomp their way through El Jefe Grande, but only a few have finished.

Nestled in East Dallas on Garland Road, Hypnotic Emporium serves up a mountainous sundae. The Mount Hypnotic consists of 20 scoops of ice cream — each of Hypnotic’s 20 rotating flavors — a couple of Charleston Chew candy bars, a Hypnotic doughnut and is topped with whipped cream, hot fudge, caramel, marshmallow and garnished with peanuts and Sixlet candies. It’s a festive dessert but a giant dairy-based hurdle to jump. Hypnotic’s frozen treat is a test for conquerors of brain freeze and sugar binges. However, the entire bowl must be finished in less than 15 minutes, or the challenger will be stuck paying $30. Winners get their face framed on Hypnotic’s wall of fame, and their meal is on the house. Only two have triumphed.

With several locations in DFW, Fred’s Downtown Philly is home of the Liberty Bell cheesesteak, an ultra-sized version of the Philadelphia classic. This Brobdingnagian sandwich is made with a pound of shredded steak and onions all stuffed in a 2-foot hoagie roll. This $68 calorie-packed mammoth weighs a whopping 5.5 pounds. For the challenge, a contender must eat the Liberty Bell with a side of fries in under 30 minutes. If they beat the clock, their face is placed on Fred’s Downtown Philly's wall of fame, the meal is free and they are free to bask in eternal glory for tackling a Texas-sized rendition of an East Coast favorite. But come prepared for this epic meal and try not to wave the white flag too soon. If one cannot hang with this heavyweight cheesesteak, their picture is posted to Fred’s online wall of shame.

Taco Joint serves up a mean 4-pound monster wrapped in tin foil and chock-full of Tex-Mex deliciousness. For $19, diners can take on Taco Joint’s Wonder Joint Challenge, an enormous breakfast burrito wrapped with three 14-inch flour tortillas and stuffed with three types of meat — chorizo, sausage and bacon — along with eggs and potatoes. To reach this gastric feat, the burrito must be eaten in under 30 minutes. Winners get a place on Taco Joint’s wall of fame and a free T-shirt.

With spots in Fort Worth and Deep Ellum, Oni Ramen serves up hot noodle bowls in a cozy environment. Oni’s spiciest bowl is the Reaper Ramen, which is a daunting challenge for anyone to finish. Oni serves several piquant dishes, but the Reaper Ramen is much higher on the Scoville scale. It even comes with a warning label. This demon-spiced ramen is made with a scorching hot miso pork broth topped with tender pork belly, Parmesan-buttered corn kernels, bean sprouts and green onions, with a base spun from Oni’s slew of spicy sauces made from habanero, ghost, Carolina reaper, Trinidad scorpion and 7 Pot Brain Strain peppers. Eaters must battle two kinds of heat: temperature and spiciness. Once the steaming bowl is placed in front of them, they only have 12 minutes to slurp up everything. Many people have tried to finish this infuriating bowl, but only eight have prevailed.

Bad Azz Burrito packs tortillas to the nines. First opened in 2012 in Tarrant County, Bad Azz serves up several blimp-like burritos, boasting beasts over 3 and 11 pounds. A burrito aficionado can try gorging on Bad Azz’s 3-pounder, which might feed a family for a week. The burrito is jam-packed with beef, beans and vegetables, then topped with melted cheese, guacamole sauce and sour cream. Bad Azz also cooks up an 11-pounder, and up to five people can try to finish it. These goliath specialties are free if challengers can scarf them down within six minutes. The current time record for the 3-pounder is 4 minutes, 2 seconds. Try not to choke, or you might end up on Bad Azz’s wall of shame, but a victorious challenger gets a free meal and an eternity of bragging rights. Message Bad Azz first and they can set up the challenge at 3 p.m. on Saturdays.
KEEP THE DALLAS OBSERVER FREE... Since we started the Dallas Observer, it has been defined as the free, independent voice of Dallas, and we'd like to keep it that way. With local media under siege, it's more important than ever for us to rally support behind funding our local journalism. You can help by participating in our "I Support" program, allowing us to keep offering readers access to our incisive coverage of local news, food and culture with no paywalls.
Make a one-time donation today for as little as $1.