The Impossible Whopper: Eat a Burger, Save the World 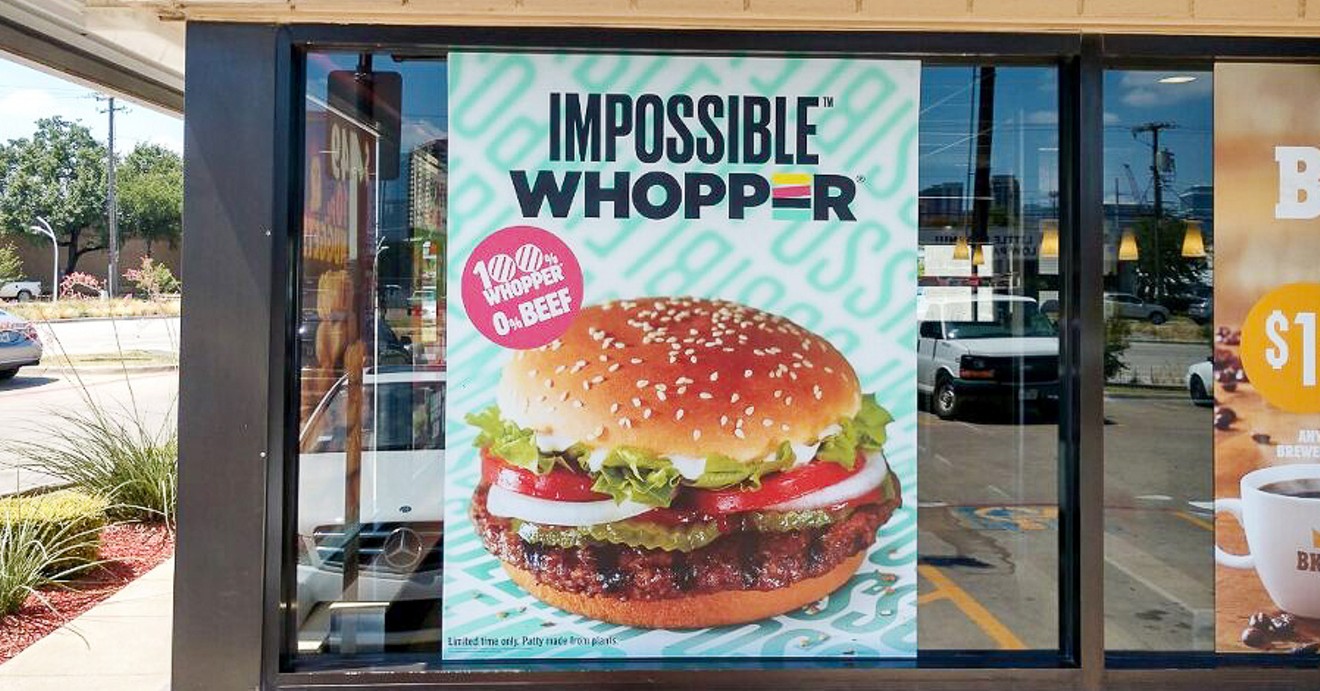 The Impossible Whopper has landed at Burger King. Philip Kingston
Science presents us with many paradoxes. Its ability to improve our lives almost exactly matches its ability to show us the ways we’re ruining our lives.

The world is overheating, and a huge cause of that destruction is global agriculture, in particular the raising of livestock for meat. Meat production might contribute as much as 18% of global greenhouse gas emissions, but that’s not the only way ranching is killing us.

The methane livestock produces traps more heat in the atmosphere than carbon dioxide emissions, and on the political front, Brazilian President Jair Bolsonaro’s insane encouragement of Amazon deforestation for cattle ranching might be one of the greatest factors in whether there continues to be a place called Miami, as one example.

Degradation of the planet through meat production is getting worse at an accelerating rate as meat consumption per person is far outstripping population growth. And that’s a damn tricky political question, because developing countries are seeing the diets of their people improve by adding more meat. As with all resources, the poor need a lot more, and we could do with a lot less.

At this point in the disaster movie, we’d call on our nerdiest eggheads to save us, and in this case that strategy may work IRL. Impossible Foods is the brainchild of Pat Brown, a genetic researcher and inventor whose résumé wouldn’t embarrass an entire faculty at most universities. The company’s breathtaking mission statement is:

“To drastically reduce humanity’s destructive impact on the global environment by completely replacing the use of animals as a food production technology. We intend to accomplish this mission within two decades by creating the world’s most delicious, nutritious, affordable and sustainable meat, fish and dairy foods directly from plants.”

Impossible makes “meat” out of soy leghemoglobin (that it dubs “heme”) produced by genetically altered, fermented yeast in a process that reads just like a script for a Dr. Mephesto episode of South Park. Seriously, why not ferment the soy where the leghemoglobin already is? How many asses does a monkey need? Impossible has very little sense of humor about the possibility of inadvertently creating an unstoppable GMO yeast monster. 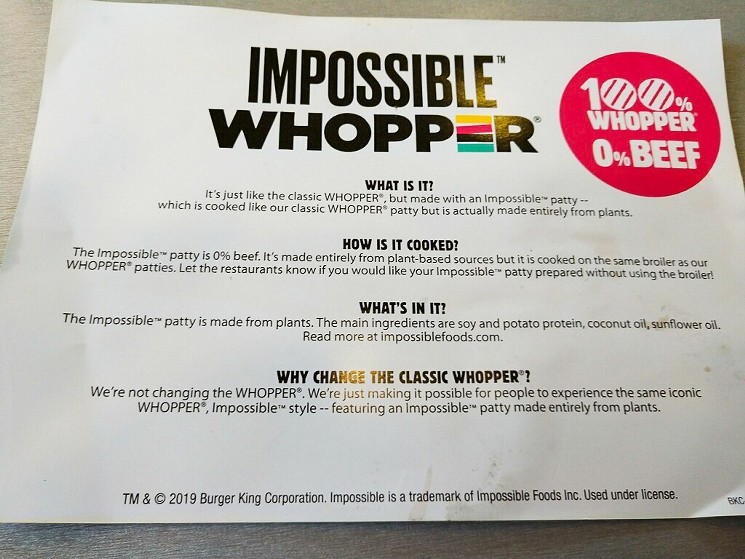 How Burger King explains what the Impossible Whopper is all about.
Philip Kingston
Impossible’s claim is that its product is equal in nutrition, taste and flexibility to beef (a claim we will test presently) and that its carbon footprint is 89% smaller than beef while using 96% less land and 87% less water, according to an independent analysis. 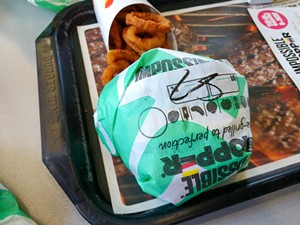 Where's the beef? Not here.
Philip Kingston
With so much environmental righteousness to be gained and not a single biology degree in my office, my colleagues and I decided to help in the only way we could. We went to Burger King to eat the new Impossible Whopper.

That’s the whole review. You won’t be able to tell whether you’re eating a meat Whopper or a fermented yeast Whopper, and with its 11 grams of saturated fat and 1,080 milligrams of sodium, your arteries won’t know the difference, either. 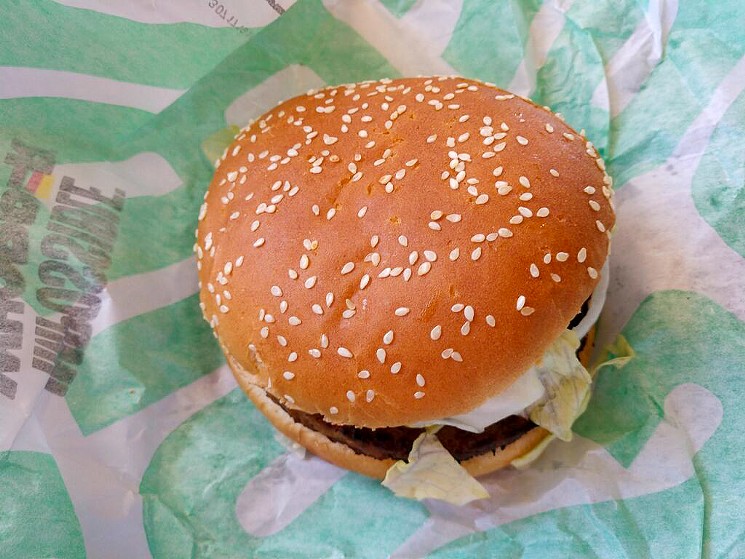 The Impossible Whopper, looking a whole lot like a normal Whopper
Philip Kingston
It costs an extra buck, which strikes me as a small price to pay to stick it to Big Ag and maybe save some polar bears, but the downside is, if you think the Whopper tastes like ass (and it does to this writer), the Impossible Whopper tastes like soy leghemoglobin ass. Impossible has a way to go before I’m reviewing 240-day, dry-aged soy leghemoglobin. 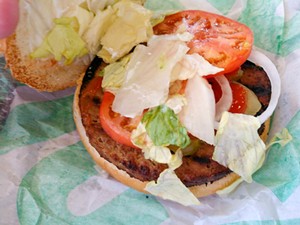 Some sad lettuce tops the meatless patty.
Philip Kingston
Anyway, standard Whopper stuff: There’s too much sugar in the bun; the vegetables seem chosen more for their shipping hardiness than for their flavor; and with this much sodium, how does BK manage to make both Impossible and conventional Whopper patties so bland?

We’ll have to see some other Impossible Foods applications to know if BK simply repeated its own mistake using a new ingredient or whether soy leghemoglobin has limitations as an ingredient.

Former Dallas City Council member Philip Kingston is an award-winning lawyer and urbanist who thanks the fine staff of Stanton LLP for eating fast food garbage with him.
KEEP THE DALLAS OBSERVER FREE... Since we started the Dallas Observer, it has been defined as the free, independent voice of Dallas, and we'd like to keep it that way. With local media under siege, it's more important than ever for us to rally support behind funding our local journalism. You can help by participating in our "I Support" program, allowing us to keep offering readers access to our incisive coverage of local news, food and culture with no paywalls.
Make a one-time donation today for as little as $1.