The Last Cash Stand: Valet at José Has Genius Idea

The valet at José is a gateway to a cashless society. Lauren Drewes Daniels
COVID-19 helped shift the scales towards a cashless society a little further along. Not having cash isn't so much the result of being too lazy to go to the ATM, but more an effort to avoid spreading germs, right? Sure.

Yet, when going to dinner at a restaurant with limited parking, we need cash for the valet drivers. It’s one of the only times we are relegated to the old ways of paper transactions. Then, after hitting the ATM, we have to stop somewhere else to buy something stupid to break a $20, which pretty much just makes us want to stay home.

But, you go and you get that cash and buy a bag of Cheetos because there's little else that compares to the social shame of walking out of a nice restaurant after stuffing your pie hole with food and drink then stiffing the valet on a tip. 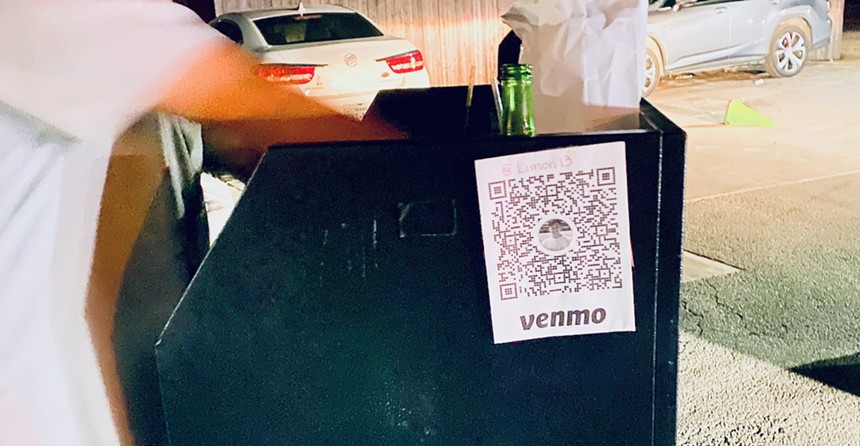 Just slap the printout on the stand.
Lauren Drewes Daniels
The valets at José have come up with a way to accommodate our lack of cash: a QR code for a Venmo account taped to the side of the valet stand. Bless them. As customers are waiting for their car, they can just pull up the app and slide a few dollars into an account. Literally, when I noticed it and exclaimed what a great idea it was, two other girls who were waiting for their cars also pulled out their phones and used the app to tip. One brought up another problem; she had cash but a larger bill than what she wanted to give. Asking for change is sometimes awkward too.

As the valet trotted off to grab another car I was curious how it worked so I yelled at him, “Wait, is this Venmo account just for you?” And he hollered back that they split all the tips put in the account.


Asking around, it turns out this is becoming a more common trend as a lot of people have downloaded Venmo or other cash apps, regularly sliding money into other accounts.

But, it's not anywhere close to ubiquitous. One valet at a hotel where it costs $15 a day to park said they don't do a group Venmo, as José did, because they don't share tips. On occasion, a customer will ask if one of them has a Venmo account and if time allows they share it. The guys at this stand also said they get paid a full wage and don't actually rely much on tips.

At the Statler, which has bars and restaurants in addition to hotel rooms, they said that getting tips via Venmo is more common, but they didn't go into details as to how it's taken care of.

It might be a matter of everyone getting comfortable with having all their money online, fluttering through space to satellites. Maybe older generations aren't so inclined to handle everything digitally, and at the same time, are more apt to have cash on them. Younger adults who Venmo for "LSD, coke and meth" — like one of my contacts on Venmo notated recently — are far more at ease with virtual transactions for everything.
KEEP THE DALLAS OBSERVER FREE... Since we started the Dallas Observer, it has been defined as the free, independent voice of Dallas, and we'd like to keep it that way. With local media under siege, it's more important than ever for us to rally support behind funding our local journalism. You can help by participating in our "I Support" program, allowing us to keep offering readers access to our incisive coverage of local news, food and culture with no paywalls.
Make a one-time donation today for as little as $1.