The wishing tree at The Local Oak Lauren Drewes Daniels
The space currently occupied by two popular Bishop Arts restaurants will soon be a new apartment complex. One already has plans to relocate, while the other is still considering options, in part licking its wounds after ongoing construction woes and a pandemic.

Steve Brown at The Dallas Morning News reported early Thursday that Alamo Manhattan Corp. is planning another major mixed-use project at Zang Boulevard and 7th Street, similar to one on the other side of the street. The $43 million project will include an apartment complex and retail building with 208 rental units and 10,000 square feet of retail.

Construction is scheduled to begin early next year. 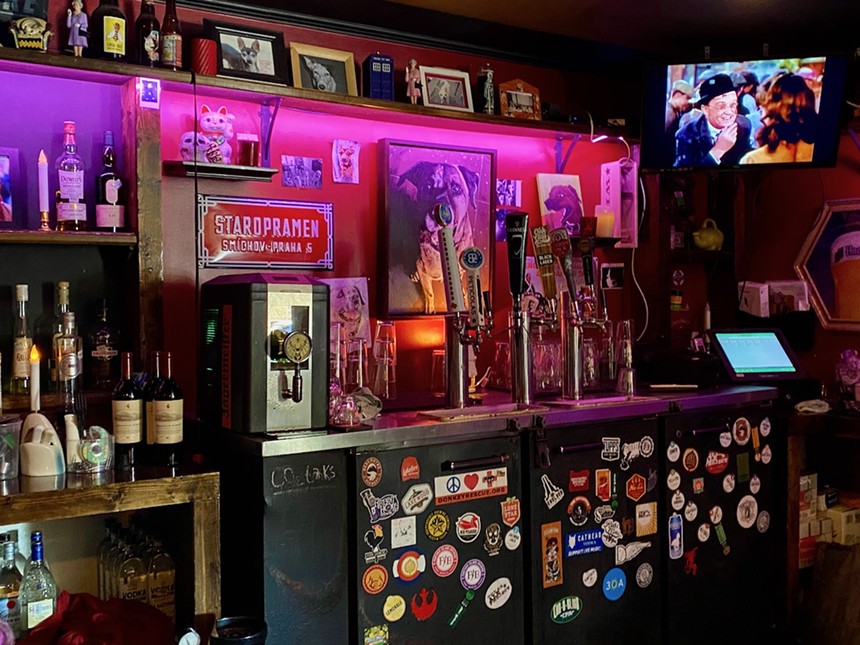 The quirky dark bar at Ten Bells Tavern has been a reliable watering hole for many years.
Lauren Drewes Daniels
Ten Bells Tavern and The Local Oak, both of which were on our 100 best bars list, sit on that block now. Meri Dahlke, owner of Ten Bells Tavern, posted a video on Facebook Thursday calmly assuaging fears; her patio and brunch will not be gone for good, “We’re not down and out," she said. "We’re just gonna move.”

Dahlke told the Observer they’ve known about the impending project for years.


“Our lease is up next year. This has been a long time coming as Alamo bought out all that years ago. We are working on a spot super close to where we are now. Like throwing distance,” Dahlke said.

She said they hope to start construction "soon."

Their neighbor, The Local Oak, isn’t so sure about what’s next. Owner Alycen Cuellar is bittersweet even though she too knew this was coming for years. Years-long construction projects to install a nearby trolly, followed by a water pipe project hurt business. “Then the pandemic just took the wind out of everything else,” said Cuellar, who opened The Local Oak eight years ago.

She said they’re definitely going to try to figure something out, a place to move, but don’t have any solid plans. They even tried to save the 100-year-old building they occupy, but it’s not listed as architecturally significant so it doesn’t get a pass.

As for the giant oak tree out front?

“That’s actually why I started the wishing tree,” Cuellar said of the giant oak in front of her restaurant that serves as shade for a patio and is wrapped with thousands of bright pieces of paper that customers have written wishes on. “Over the years people have returned to tell us their wishes have come true, like marriages and births.”

She'd hoped all those wishes would save the tree.

Cuellar says they plan on a big Christmas party to celebrate everything that The Local Oak has come to mean to the neighborhood but will probably shutter after the new year. “It’s just not fiscally responsible to live through two years of construction.”

Especially not after two previous years of construction followed by a pandemic.
KEEP THE DALLAS OBSERVER FREE... Since we started the Dallas Observer, it has been defined as the free, independent voice of Dallas, and we'd like to keep it that way. With local media under siege, it's more important than ever for us to rally support behind funding our local journalism. You can help by participating in our "I Support" program, allowing us to keep offering readers access to our incisive coverage of local news, food and culture with no paywalls.
Make a one-time donation today for as little as $1.