Denny's partnered with TikTok-ers Jenny Solares and The EnkyBoys on some cookie dough pancakes. Courtesy of Denny's
If your brand’s target audience includes anyone between the ages of 13 and 60, then you should be on TikTok right now. With close to a billion users and more than 200 million downloads in the United States alone, food is having a moment on TikTok.

Food videos are incredibly popular on TikTok. Clips with the hashtag #TikTokFood have collectively racked up more than 44 billion views, a number that’ll make any marketer blush. 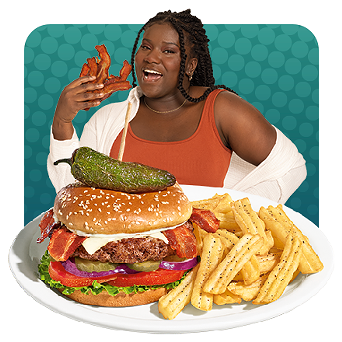 TikTok Creator Elise Ofasa and the Jala-Bac Burger are one of several new items for Denny's 'Social Stars Influenced Menu'
Courtesy of Denny's
Knowing that, it's easy to understand why Denny’s is collaborating with TikTok creators to produce a dozen menu items that have rolled out these past couple of weeks. The first wave includes Get That Cookie Dough Pancakes with Jenny Solares and The EnkyBoys, a Jala-Bac Burger with Jonathan Chavez and Elise Osafo, and Clearly Very Fruity Pancakes with CallMeBelly and Matt Taylor.

This latest project with Denny’s is among a growing trend of large food brands teaming with TikTok stars in an effort to use social media to make more money. Denny’s is well-known for its breakfast offerings like the Original Grand Slam and hearty burgers, but it’s not the kind of place you imagine airy 20-something social media influencers would gather at for a hangout.

It's not content from the brands themselves that appear to be swaying users. The 701 TikTok-ers surveyed by MGH said their restaurant behavior is most heavily influenced by users they know personally, while videos from food bloggers and influencers ranked second.

According to a study from marketing agency MGH in 2021, 36% of TikTok users have ordered from a restaurant after seeing a video about it on the platform.

This is why brand collaborations are so creator-focused. For example, Dunkin' last year partnered with influencer Charli D'Amelio to launch a special cold brew in her name — and saw cold-brew sales rise by 45% within two days. Chipotle leveraged the app for a hiring push and its collaborations with influencer David Dobrik have made them the most followed food brand on the platform.

Can it be a bit weird seeing your favorite TikTok creator being leveraged as advertising to get you to eat out and spend money? Yes. Will it ever stop? Absolutely not. More than 65 million Americans actively use TikTok every month, so expect to see more TikTok-inspired menus at your favorite local spots.

Oh — and btw — here's our TikTok page.
KEEP THE DALLAS OBSERVER FREE... Since we started the Dallas Observer, it has been defined as the free, independent voice of Dallas, and we'd like to keep it that way. With local media under siege, it's more important than ever for us to rally support behind funding our local journalism. You can help by participating in our "I Support" program, allowing us to keep offering readers access to our incisive coverage of local news, food and culture with no paywalls.
Make a one-time donation today for as little as $1.