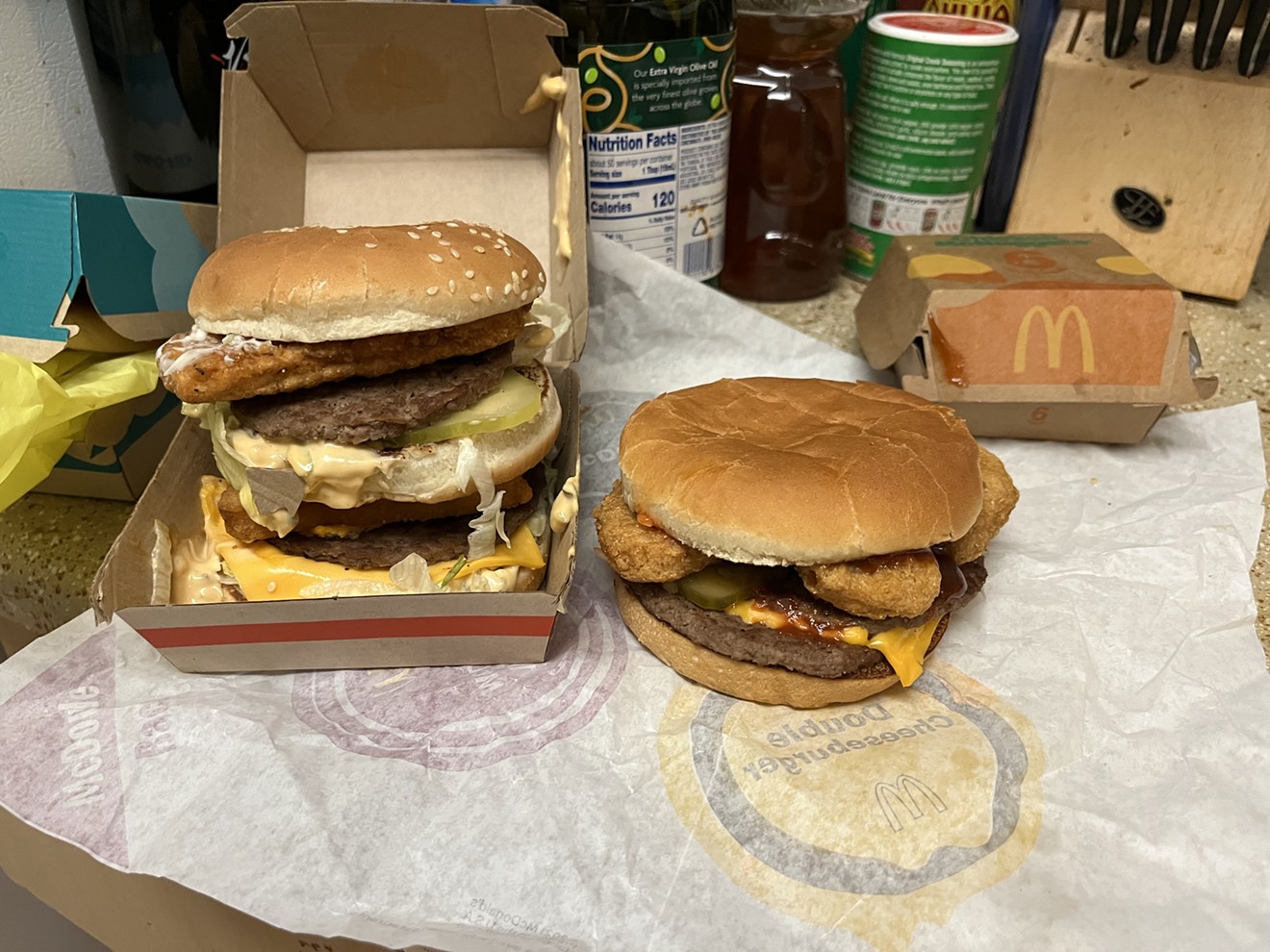 There is no reason to eat either of these gastrointestinal abominations that have been hijacked by McDonalds marketing team. Danny Gallagher
Satirist John Oliver once described the food hack of making a grilled cheese sandwich in a pop-up toaster turned on its side as "a billion dollar idea that is also worthless."

McDonald's has menu suggestions for ways to hack its sandwiches into absurd atrocities against your duodenum, and it's the complete opposite of that idea, which is impressive since Oliver's view is itself a contradiction. The creations may be worth something to McDonald's but have no physical or monetary value for anyone else, especially for the people who eat them.

One of the chain's hacks is the Land, Air and Sea Burger where the patties of a McChicken and a Filet-O-Fish sandwich are placed between the double-stacked Big Mac. The other is a Crunchy McDouble made with a double cheeseburger off the Dollar Menu with an order of Chicken McNuggets and a packet of barbecue sauce smothered under the top bun. They are both as repulsive as they sound even if the Crunchy McDouble kind of makes more sense. 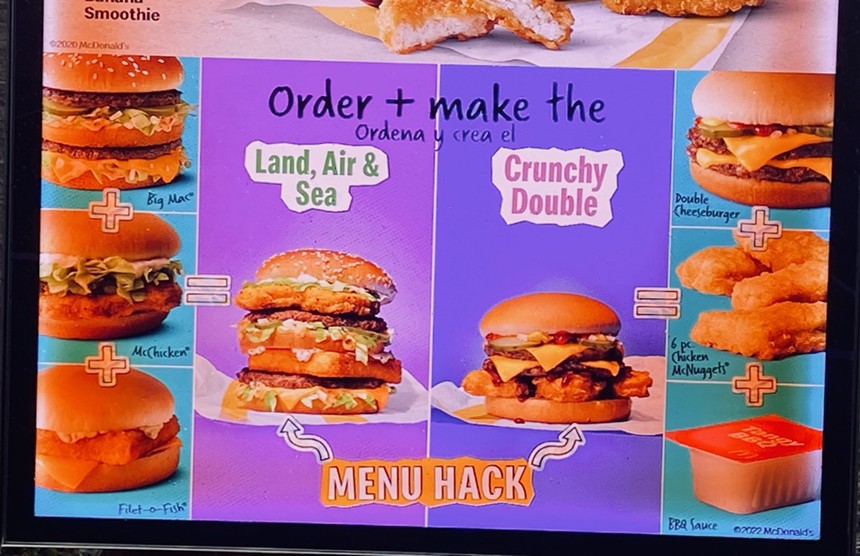 Don't be lured in by the pretty colors. Just look away.
Lauren Drewes Daniels
Both of these have been on McDonald's menu as "secret items" and if you eat either of them or (worse) both, you'll wish they stayed that way. But recently they’ve been promoting these hacks in two-toned fuchsia on their menu and they're hard to resist.

They are basically co-opted from the certifiably insane and ingenious world of the Internet where food hacks and dares are a quaint appetizer for the web's darker corners. It's also really appropriate that McDonald's would hijack these two ideas since its owner Ray Kroc hijacked the entire concept of the fast-food restaurant from the McDonald brothers in 1961.

In reality, both are just ways to get people to buy more food items in one visit. These items aren't constructed by the staff. You have to buy each item separately and make it yourself at home or in your car.

The Land, Air and Sea Burger is easily the more disgusting of the two just from its name. There's a reason that "surf 'n' turf" stops at "turf." A third protein added to a single meal beyond those two is just ostentatious.

It also doesn't help that the Filet-O'-Fish, the McDonald's fish sandwich invented in 1965 to appeal to people observing the holy season of Lent, is the blandest slab of mass-produced fish on the planet. Even a bad, fishy taste would be a step up for the Filet-O-Fish because it would at least have some kind of taste.

The combination of the McChicken, Filet-O-Fish and Big Mac are basically a sketch idea for a Jackass movie that director Jeff Tremaine threw in the shredder. The taste is confusing at best, creating an almost tart creation thanks to its special sauce, which is on par with a handful of Sour Patch Kids.

If you're dumb enough to try and eat the whole thing (like me), the structural integrity gets ruined with every bite, turning into something that barely looks like a sandwich and more of a disgusting ball of meat, cheese, bread, lettuce and some kind of edible glue.

"The only ingenious thing about it is it allows overeaters with busy schedules a way to eat a burger and a packet of McNuggets with one hand." - Danny Gallagher

By comparison, the Crunchy McDouble looks like a rice cake. The taste makes more sense than the Land, Air and Sea Burger. Barbecue sauce on chicken and beef go better together but you're still dealing with two of the blandest proteins known to man, which require some kind of sauce or condiment just to make them consumable. The only ingenious thing about it is it allows overeaters with busy schedules a way to shove a burger and a packet of McNuggets with one hand.

The worst part comes well after you've consumed either or both of them. McDonald's foods may be unhealthy but they are at least designed to mimic an addictive taste that our bodies can tolerate. These two offerings are just a creative way to eat McDonald's' entire menu if you're in a hurry.

The only entertaining thing in the entire experience of buying and consuming the Land, Air and Sea Burger and the Crunchy McDouble is seeing an employee's face when you order them with a Diet Coke.
KEEP THE DALLAS OBSERVER FREE... Since we started the Dallas Observer, it has been defined as the free, independent voice of Dallas, and we'd like to keep it that way. With local media under siege, it's more important than ever for us to rally support behind funding our local journalism. You can help by participating in our "I Support" program, allowing us to keep offering readers access to our incisive coverage of local news, food and culture with no paywalls.
Make a one-time donation today for as little as $1.