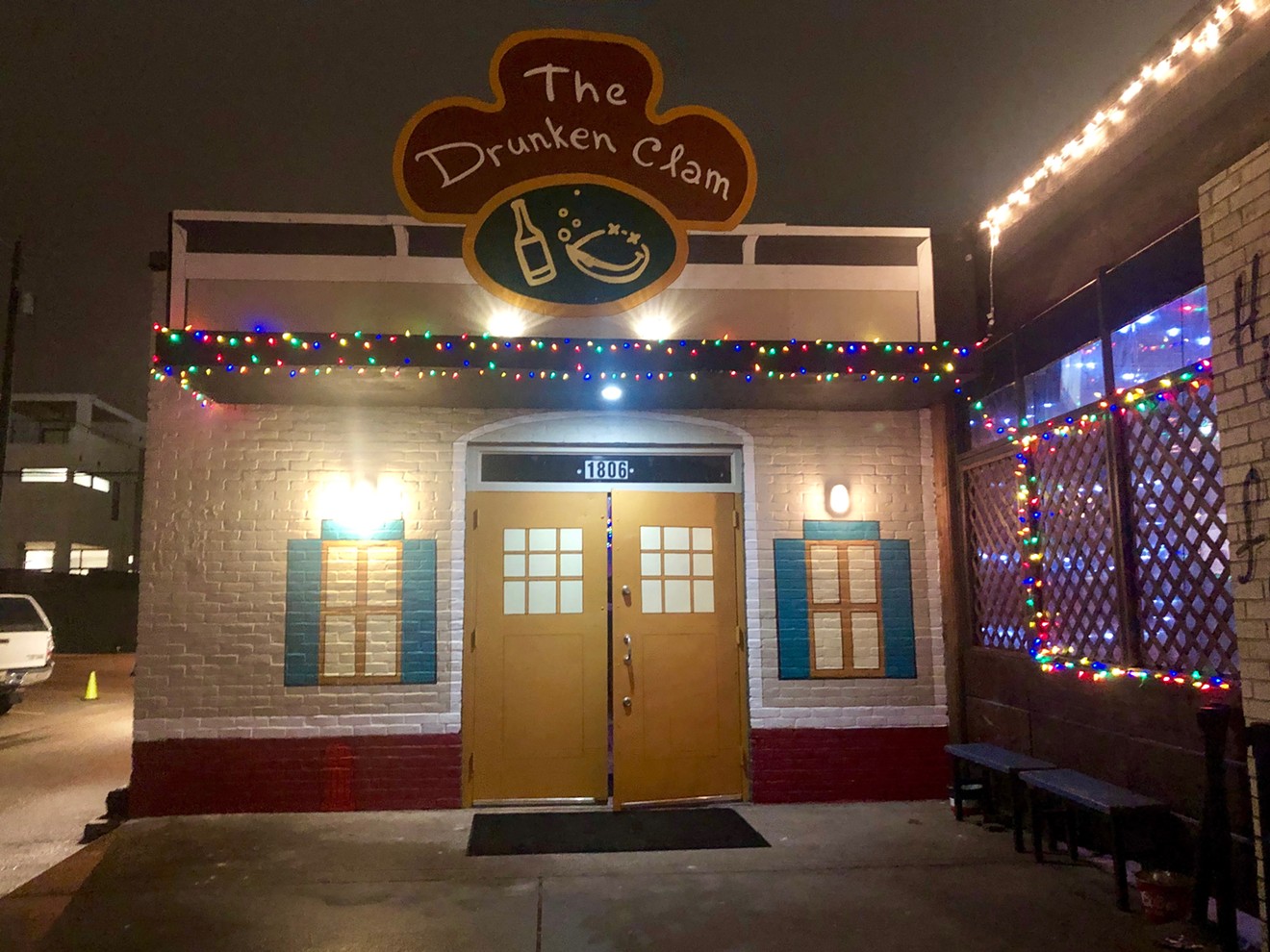 The Whippersnapper is dead, but something new (and temporary) has already popped up in its place: the Drunken Clam. Look familiar? Taylor Adams
If you frequent the Whippersnapper — that smaller establishment next to High Fives off North Henderson Avenue — the place might look a little different from usual. The bar closed after a massive New Year's Eve party, but something new has already opened in its place — something new, something temporary and something based on a fictional bar from a popular cartoon TV series.

Welcome to the Drunken Clam, the famous watering hole from "Family Guy." Starting tonight, the Clam takes over the former Whip with a pop-up that runs through Feb. 2.

The concept comes to life via This and That Concepts, which is behind the Whippersnapper, as well as High Fives, Tiny Victories, Ferris Wheelers and Dibs on Victory. Their goal is to have an identical facade and interior design to the show’s establishment while providing special drinks and “several surprises” "Family Guy" fans can appreciate. 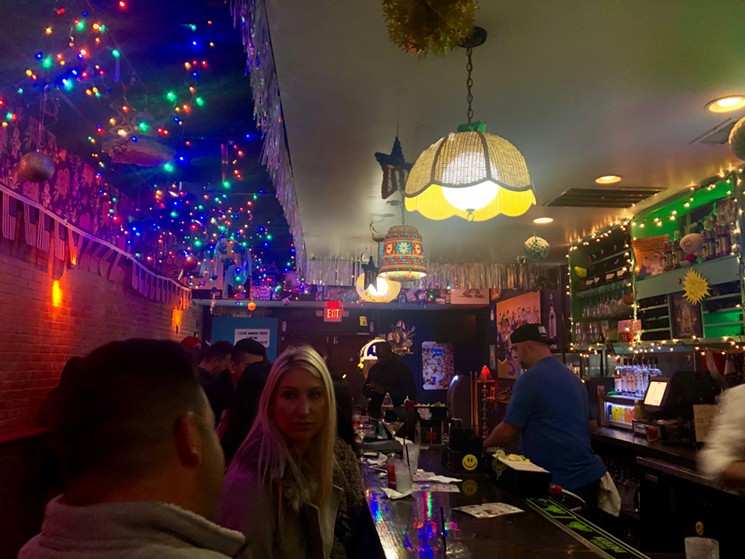 The interior at Dallas' take on the Drunken Clam
Taylor Adams
It’s close, though not an exact match. But then again, how could it be?

The exterior is probably the most impressive part, as the small surface area has been made to look identical to the show’s bar. The interior is less startling. It's basically themed-out in "Family Guy" kitsch.

Sure, the “actual” Drunken Clam has more light and red booths, as opposed to our real-life dark interior, a few dark booths and rotating disco ball in the disguised Whippersnapper, but it’s fun enough.

Along with the decor and TVs playing the show, you’ll find a small themed cocktail list. Forty ounces of “Peter’s Pawtucket Patriot Ale” (Miller High Life) gets you an embarrassingly large bottle for $10 — but it has the “Patriot Ale” branded label on it, so it’s cool. 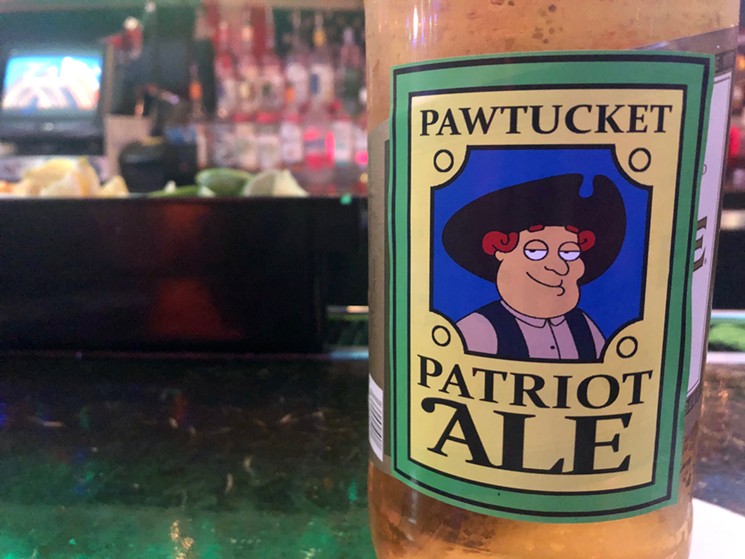 In this case, Pawtucket Patriot Ale is just Miller High Life with a new label.
Taylor Adams
If follow the show's running gags, you might appreciate Stewie’s Cool Hwhip ($9), though it’s overly sweet and smacks you in the face with coconut. Rum, blue curacao, Cruzan coconut rum and pineapple juice are thrown into a cup with ice before getting topped with canned whipped (hwhipped?) cream and a maraschino cherry.

If you’re looking to start the night with confidence, the hair of the dog drink will get you Brian’s martini ($9) with vodka and dry vermouth, which are vigorously shaken and finished with three large olives. In all transparency, one of these could float you for an entire evening.

If you’re a "Family Guy" fan, there’s probably been one instance where you’ve boisterously said, “Ohhh yeah,” like the Kool-Aid man who busts through walls in the show. Sometimes people get it, sometimes people think you’re weird. 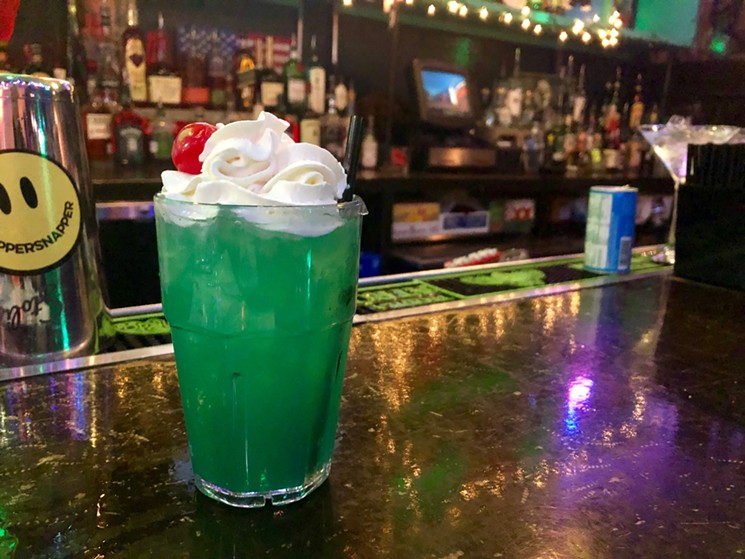 Stewie's Cool Hwhip, $9, is face-puckeringly sweet with rum, blue curacao, Cruzan coconut rum and pineapple juice.
Taylor Adams
At our temporary Drunken Clam, if you say that, you’ll get a shot for $7. A small glass that feels like a lot of fluid will come out with vodka, “melon” (?), Amaretto and cranberry juice. Some of us thought it tasted like Jell-O before it forms in the fridge; others thought it tasted like a melted popsicle. Either way, you’re getting some kind of sweet kick of fruit punch in a shot.

As for the interior, you’ll find a funky mood that doesn’t lend itself to an identical Quahog establishment, but one that provides a fun, theme-filled space for a cocktail before you walk across the street to Louie’s. (For the record, you can food here; the Drunken Clam serves food from High Fives.)

Pictures of characters are pasted all over the walls. For example, a little poster of main character Peter is up on the bar among displayed bottles, with the words, “Don’t worry, I GOT AN IDEA, an idea so smart my head would explode if I even began to know what I was talking about.” 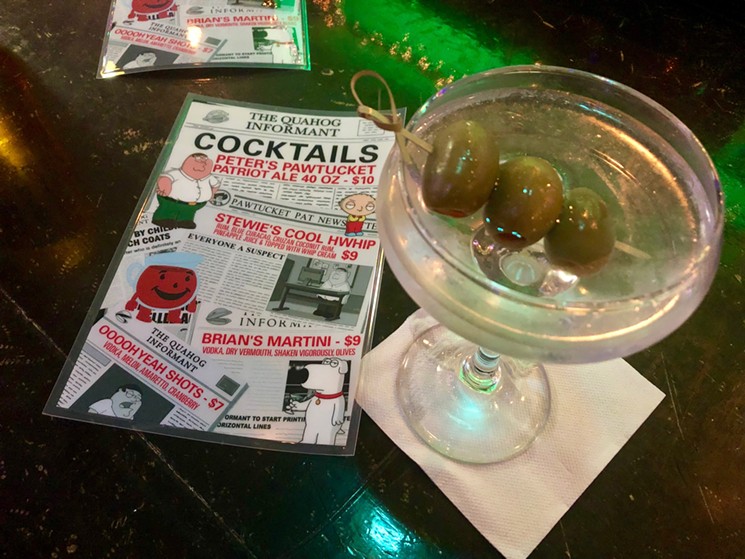 Just one Brian's Martini is probably enough to keep you buzzed all night.
Taylor Adams
In the back of the room is a twirling disco ball that reflects light into enough smoke machine fog to fill your sinuses a bit, but attempts to set some kind of mood. Also in that space are cozy booths: ones with large pictures of Lois and Meg pasted above. Nude. With pasties.

We have no explanation for that. It is what it is.

The Drunken Clam doesn't leave restrooms out of the experience. The men’s have Mr. Herbert, the creepy pedophile from the show — something we’re glad wasn’t in the women’s restrooms.

The women’s restroom features everyone's favorite idiot son, Chris, on the wall with the words, “I tucked it in between my legs as a joke, and then it got stuck.” It's still basically the Whip, but "Family Guy" fans will dig the art on the walls and the themed cocktail menu.
Taylor Adams
Admittedly, immediately next to the front door of this establishment is a fun selfie spot. Glenn Quagmire shows up — that character no one really likes, but as the show does, it pushes the boundaries with this one.

Next to the glowing ring that projects a light that makes your skin look flawless is a dialogue bubble from him reading, “I love naked pics. I mean, I love taking pics.” Below said lighting is another bubble that reads, “Sayyyyy ... Giggity!”

They kept this part themed, too. The photo booth will send you a GIF of you looking jovial with the Drunken Clam branding and accessories that can be added to your appearance after the fact.

You can experience all of this for a month. After Feb. 2, the bar will close and undergo a remodel.

“We have some exciting plans for the Whip moving forward, but we thought we’d have a little fun first by bringing The Drunken Clam to Dallas,” Brandon Hays, This & That co-owner, said in a press release. “Whether you’re a fan of the show or not, we think you’ll enjoy dropping by and checking out the pop-up bar along with drink specials, photo opportunities and more."

The Drunken Clam, 1806 McMillan Ave. Open 6 p.m.-2 a.m. Friday, Jan. 4 through Saturday, Feb. 2.
KEEP THE DALLAS OBSERVER FREE... Since we started the Dallas Observer, it has been defined as the free, independent voice of Dallas, and we'd like to keep it that way. With local media under siege, it's more important than ever for us to rally support behind funding our local journalism. You can help by participating in our "I Support" program, allowing us to keep offering readers access to our incisive coverage of local news, food and culture with no paywalls.
Make a one-time donation today for as little as $1.