There’s Nothing Fancy About Ceviche Oyster Bar, and That’s Why We Love It 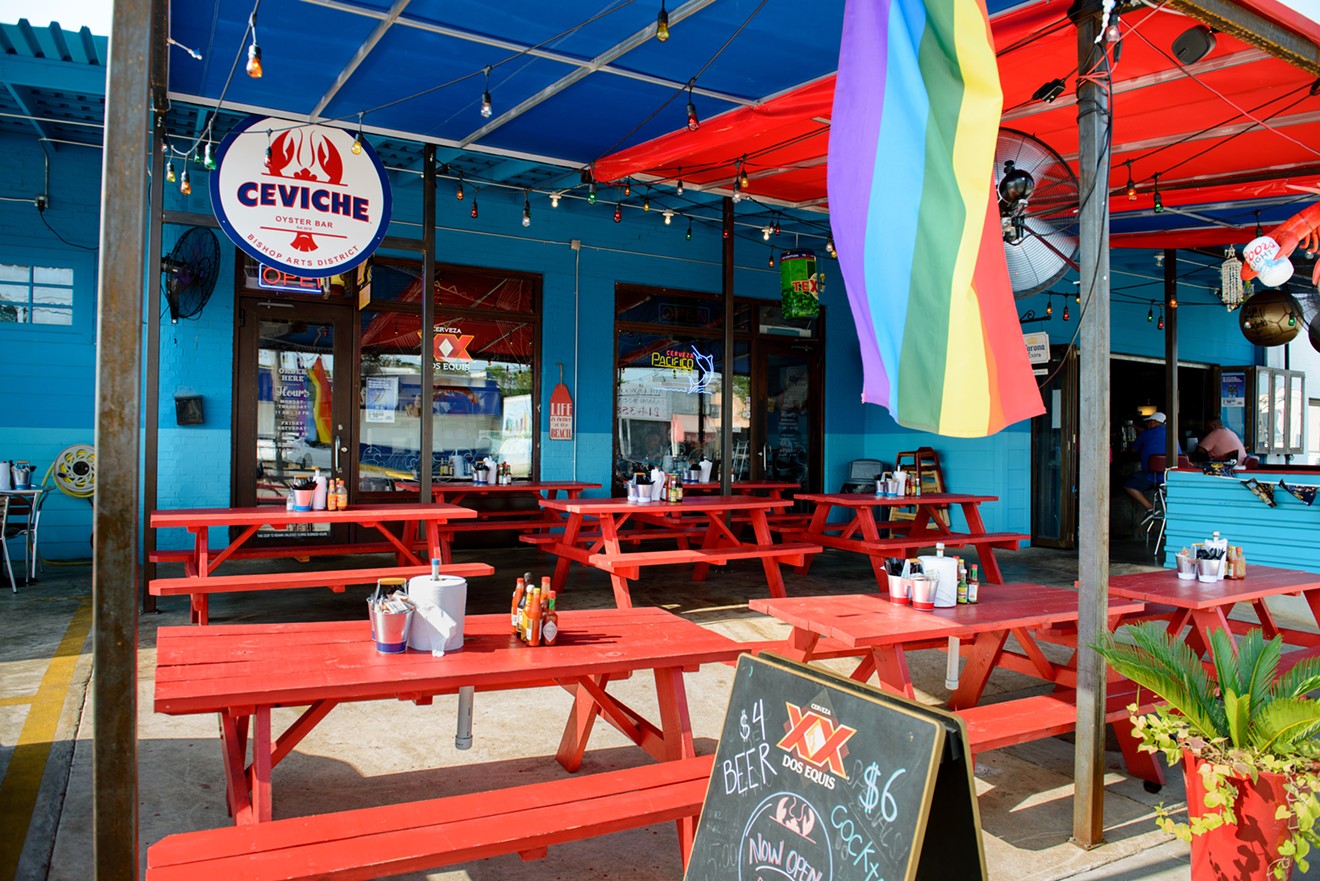 Ceviche's patio is a beautifully laid-back place where you can watch North Oak Cliff go by. Alison McLean
In this age of performative eating, foodies chase after the next big restaurant and aspire to the perfect dinner. Gourmets with airline miles collect Michelin stars like Sonic the Hedgehog collects emeralds. Strangers constantly ask me, “What’s a great new restaurant in Dallas?”

Honestly, I don’t know anymore. These days, I’m spending all my time at Ceviche Oyster Bar.


It’s nothing fancy; it just does its ceviche, fried oysters and okra the way they should be done.

Ceviche is a casual little spot just a few blocks west of Bishop Arts, far enough away that the tourists haven’t quite found it. It’s not meant for tourists anyway. It’s a locals-only hangout in a converted mechanic’s shop, with a simple menu of grilled, fried and raw seafoods, fries, hush puppies, slaw and okra, plus a bar with Negra Modelo on draft. What more could we need?

The front patio helps, too. It sidles up from the building all the way to the edge of Davis Street, in two separate terraces mostly covered by an old-fashioned corrugated metal roof. It’s a perfect perch in springtime and a shaded, breezy relief in the summer, although for first-time visitors, the patio can make Ceviche a little confusing to navigate. On the left, in the old garage, is the ordering counter and open kitchen. Down the hall to the right, in a new addition to the building, is a separate bar area that slings beers and coastal cocktails. Order a basket of seafood, then walk over to the next room to grab a liquid accompaniment.

The fried oyster po'boy
Alison McLean
It’s probably best to describe the menu here as Gulf of Mexico fare. There are Mexican preparations here, but also po'boy sandwiches, fried okra, and red beans and rice. The fried oyster po'boy is actually one of Ceviche’s stars, walking the fine line between classical and cheffy ($10). Yes, the bread is real, good quality bread with grill marks scorched across the top. Yes, there are slices of avocado and handfuls of non-shredded lettuce greens. But the spotlight still shines on big, perfectly fried Gulf oysters. The fries alongside are seasoned with so much salt and lemon pepper that they’re practically speckled. This is a good thing.

The other po'boys follow the same formula, with the tomato slices growing fatter in summertime. The catfish is lightly, flakily breaded and arrives neatly arranged in a single layer along the length of the baguette ($10). Purists might argue that it’s altogether too tidy to count as a po'boy, but the counterargument is that it tastes great. 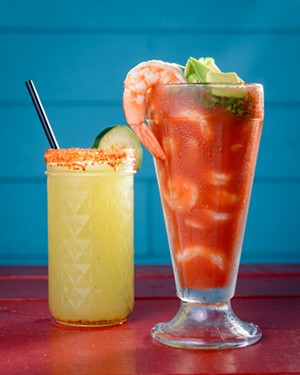 Shrimp cocktails and margaritas should be mandatory Oak Cliff eating.
Alison McLean
If the po'boys are silver medal winners here, the gold most certainly goes to the restaurant’s namesake dish. I especially love ordering the ceviche on tostadas so thin that they feel like they could break at any moment, so that I can be thrilled when they never do. The ceviches here are simple, classic affairs: finely diced red onion, chopped-up tomatoes, cilantro, a whole lot of lime juice.

I thought the mixed ceviche, a jumble of tender shrimp and fish, was my favorite tostada topping until the kitchen started serving octopus tostadas this summer. Yes, the octopus ceviche is tremendously messy — its sauce dripped onto my shorts, into my friend’s water cup and generally everywhere else that gravity could coax it — but the seafood itself, firm yet tender, full of flavor, made up for the inconvenience.

Tostadas come two to an order, and they’re stacked about two inches high with ceviche and slices of avocado. They’re absurdly filling, and at the prices Ceviche Oyster Bar charges — $13 for a mix, $12 for octopus — they’re an absolute heist. Another big steal: the side order of fried okra, just $3 for an entire plastic diner basket.

Truthfully, not everything here is perfect. An order of calamari turned out to be technically correct — cooked properly, bathed in salt and pepper — but not especially interesting ($8). The same, more or less, goes for the fried seafood baskets, which, in classic Gulf style, layer fried fish on fried potatoes on finger-shaped hush puppies. A fried shrimp basket brings shrimp fried to perfection, tender and soft under that blanket of crunch, but also a feeling that maybe this is just not my thing ($12). Owners Raul Reyes and Elizabeth Beltran
Alison McLean
My small cup of coleslaw featured slivers of jicama, but for some reason it came with no dressing of any kind ($3). Think of it as an even more compelling reason to grab the fried okra. And the house water here is so strongly flavored with lemon and lime that I sneaked my plastic cup into the bathroom to fill it from the tap.

For those who shy away from fried foods and aren’t in the mood for ceviche, the kitchen’s simple grilled fish is up to the quality of many of Dallas’ more upscale restaurants. A plain order of grilled rainbow trout arrives flaky-tender, with old-school grill marks slashing across both the fish and the summer squash alongside ($13). In addition to gently smoky grilled veggies, there’s an equally straightforward rice pilaf, too. Is there anything better than ceviche on a hot Texas summer day?
Alison McLean
Pro tip: Order grilled trout but bring a friend who’s willing to share, too, and have them grab something more sinful.

Truth be told, Ceviche Oyster Bar in general feels like one big pro tip. Want to escape the Bishop Arts crowds and have an unpretentious meal? Want to plan a New Orleans evening with seafood and a jazz show at Revelers Hall? Need to win over a friend who doesn’t like octopus? Here’s the answer.

Owner Raul Reyes is the same man who brought Oak Cliff the upscale Veracruzan restaurant Mesa, a tiny Jefferson Avenue spot that has entertained guests like Beyoncé and Jay-Z. Ceviche Oyster Bar is a more relaxed, easygoing younger sibling. It’s nothing fancy; it just does its ceviche, fried oysters and okra the way they should be done.

I could get all fancy here and say that Ceviche Oyster Bar is a political statement, a vision of the American and Mexican coasts merging into one harmonious culture and cuisine. But that’s reading too much into it. This is a fun, friendly restaurant that’s casual enough that I can happily spill octopus ceviche on my pants. Aside from the occasional trip to the laundry, I’m never going to leave.