The Thunder Mifflin comes with Ezzo pepperoni cups that curl up and get super crisp on the edges. We might start a cult for them. Angie Quebedeaux
Many of you twitterers who follow Thunderbird Pies' social media stream witnessed a kerfuffle last July when one loyal fan of the Detroit-style pizza, which was operating as a ghost kitchen inside a Zoli's, was upset because he could only get his favorite pizza Monday through Thursday.

It all escalated quickly, with threats to call “corporate to let them know about the bullshit attitude towards customers." To which Thunderbird Pies social media impresario, Jeff Amador, responded, “I am Corporate Motherf*****r." Then they made shirts. But, more important: Tim was right. We need this pizza seven days a week.

Thunderbird is no longer playing hard to get every Friday, Saturday and Sunday. Last week they opened their first brick and mortar in East Dallas, serving pizza every day. I am corporate, Motherf****r T-shirt from Thunderbird Pies
Angie Quebedeaux
Located next door to Cane Rosso at White Rock Lake, Thunderbird Pies specializes in Detroit-style pizzas. What the heck is a Detroit-style pizza? A slice of heaven disguised as a pizza is what it is. A rectangle-shaped pie characterized by almost-burnt cheese crust edges, loaded with Wisconsin brick cheese, toppings, and, always, sauce on the top. This style of pizza has become increasingly popular across the country and is just starting to penetrate the Dallas market.

Why would they open a pizza joint literally next door to another pizza joint?


“Ultimately, Detroit-style pizza is so different from the soggy pizza tortillas we make at Cane Rosso, we didn’t think we’d be competing with ourselves too much,” says Jay Jerrier who owns both spots, and Zoli's New York-style pizzeria. (He's running a trifecta on pizza styles.)

Also, Thunderbird Pies is a more casual dining and takeout spot, unlike Cane Rosso’s sit-down, table-service environment. At Thunderbird Pies, you place your order and pay at the counter, receive a number and your meal is delivered quickly to your table.

It’s also a very kid-friendly place with and a few video games to entertain young ones and some “claw crane” machines readily available to take whatever spare change your kids sucker you into giving them.

In addition to their Detroit-style pizzas, the menu also includes several appetizers, sandwiches and salads. One unique appetizer that you don’t see on many menus around the DFW area is their house-made Texas Pickle Dip (described as pickle de gallo), served with chip-shaped French fries. The Lee’s Lil’ Meatballs are also a great starter to share.

Lee's Lil' Meatballs
Angie Quebedeaux
The pizzas come in two sizes: small (8” x 10”) or large (10” x 14”) and range from $14 to $27 each. A large pizza will easily feed four adults, especially if you order appetizers or a salad. And for those die-hard Honey Bastard (hot soppressata, bacon marmalade, and honey habanero) fans, you can now have it Detroit-style.

If you’re obsessed with those small Ezzo pepperoni cups that curl up and get crispy on the edges, be sure to consider either the Connie or the Thunder Mifflin pizza. And if you’re in the adventurous mood, check out the Bacon Jamz ’03 (smoked pork shoulder, bacon marmalade, caramelized onions, mama lil’s peppers, and charred pineapple drizzle) or the Luka Brasi (meatballs, ricotta, toasted oreganata breadcrumbs, and tomato sauce). 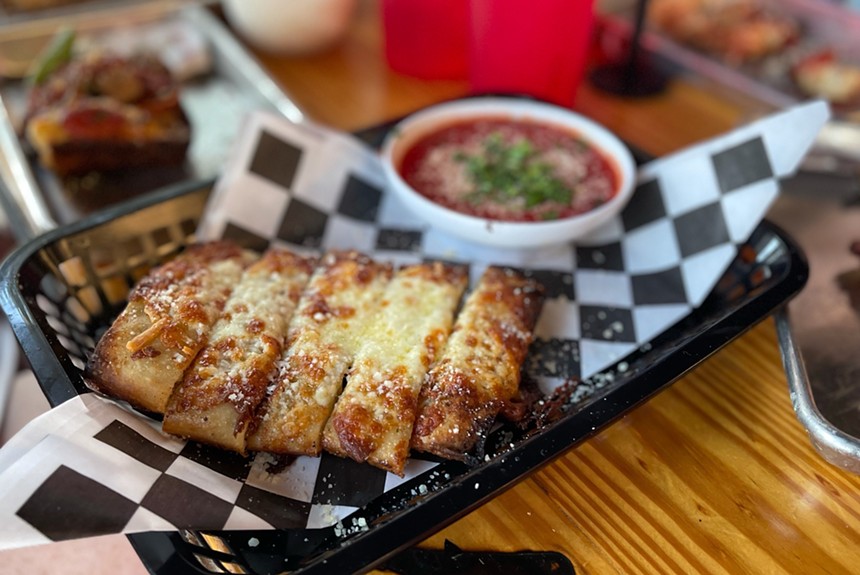 Don’t forget to save room for dessert at Cow Tipping Creamery, located within the Thunderbird Pies establishment. Cow Tipping Creamery’s dessert offerings include soft-serve ice cream paired with a large selection of homemade toppings, shakes, and baked goods. While the kids may settle for something simpler like soft-serve ice cream in a cone with sprinkles, the adults will go nuts with one of their stackers, such as the Southern Charm, NOLA, or Reese’s Witha’Spoon.

They also have beer, including Rollertown out of Celina, and wine and their signature “Pinot Freezio” drink, which is pinot grigio with cucumber lemonade.

For now, Thunderbird Pies and Cow Tipping Creamery are open seven days a week from 4 to 10 p.m., with the goal to eventually open for lunch on the weekends.

Thunderbird Pies, 7328 Gaston Ave. #110 (East Dallas). Open 4 to 10 p.m. Monday - Sunday.
KEEP THE DALLAS OBSERVER FREE... Since we started the Dallas Observer, it has been defined as the free, independent voice of Dallas, and we'd like to keep it that way. With local media under siege, it's more important than ever for us to rally support behind funding our local journalism. You can help by participating in our "I Support" program, allowing us to keep offering readers access to our incisive coverage of local news, food and culture with no paywalls.
Make a one-time donation today for as little as $1.