Cicis pumpkin spice cinnamon rolls. Lauren Drewes Daniels
Cicis recently introduced pumpkin spice cinnamon rolls into the buffet lineup. The budget-friendly pizza chain has long played a role in feeding the masses, like it or not, especially young kids and broke college students. Many parents begrudge a trip there, but it's a lot of food for not a lot of money, and the kids are entrained for 20 minutes or so. And the salad bar is fine.

In college, it used to be a Sunday meal. A splurge. My friend got called out for putting Sprite in her water cup once, a humbling and shameful lashing that is still funny. Eventually, you mature and start collecting Kohl's Cash instead cheating Cicis. It builds character.

But then there are the cinnamon rolls. They're quite simply fire. 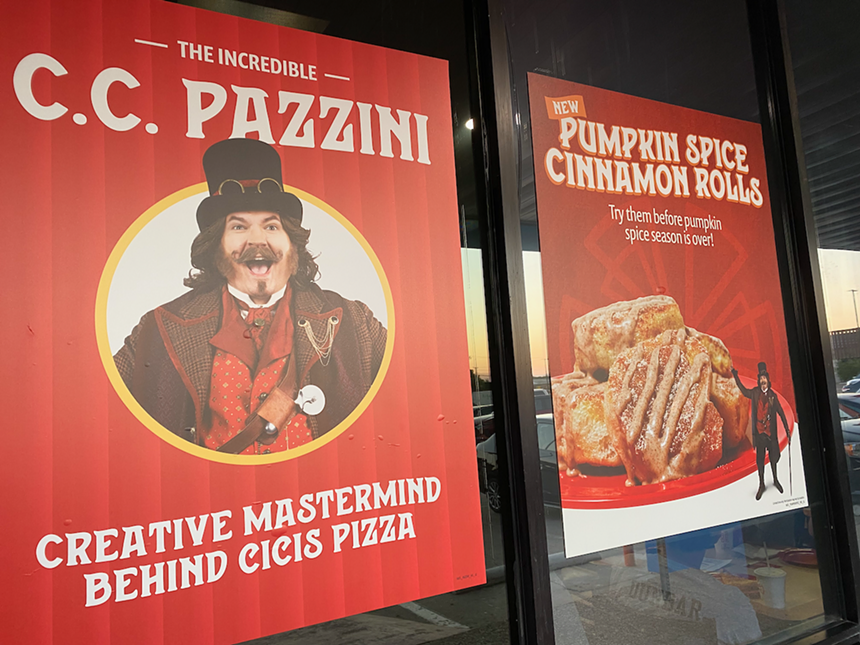 Let’s just get straight to it: Yeah, it was crazy. Cicis is the cold bucket of ice water of eating out. The night we went, there was a birthday party in the middle of the dining room, an elementary school was having a fundraiser and it sounded like there was a rager in the game room: a steady ecstatic high-pitch squeal was coming from some small soul back there. A group of guys sitting right outside the game room didn't care at all because they knew what they were getting into when they walked in.

Be warned, however, your post-pandemic trigger for germs will likely be at def-con level one. Everyone touches all the same tongs for the food; sometimes sweaty kids run straight from the rager to the buffet for another slice. (How about each person gets tongs? Like at some panaderias.)

But here’s another thing, Cicis was running smoothly. Hot pizzas were put out at a steady clip. The tables were cleaned off quickly. And they never ran out of cinnamon rolls. (You ever stand over an empty cinnamon roll pan and just stare at the kitchen and wait? Sure you have.)

After one zip through the line, which could be compared to cave diving — you know you can do it, you're just not sure if you really want to — we grabbed a plate of cinnamon rolls and headed to the table. Then, we found hand sanitizer.

Those cinnamon rolls still bring it. There’s not a damn thing wrong with them. Even with that kid still screaming in the game room, they were a reprieve. Now, we’re not comparing these sweets to, say, Bisous Bisous. We’re comparing these to an otherwise boring Tuesday evening.

This new fall flavor has a nice amount of cinnamon and, notably, other fall spices, like maybe nutmeg. Biting into a warm roll, you know it's cooler outside, you can taste it. The dough is puffy and warm. Unrolling the gooey mass is unquestionably the best part of being at a Cicis.

Insider tip: Ask the kitchen staff for extra icing over your mound of cinnamon rolls. They used to do that back in the day, and maybe, when they’re not slammed, they’d still be happy to oblige.

The price for an adult buffet is around $8 at most places, and that includes all-you-can-eat cinnamon rolls. A drink is extra, but water in a clear cup is free.

As we were leaving, the sun was setting and it was a nice fall night. As we walked across the parking lot, it was calm and the birds were chirping. And we could still hear that one kid screaming in the rager all the way to the car.
KEEP THE DALLAS OBSERVER FREE... Since we started the Dallas Observer, it has been defined as the free, independent voice of Dallas, and we'd like to keep it that way. With local media under siege, it's more important than ever for us to rally support behind funding our local journalism. You can help by participating in our "I Support" program, allowing us to keep offering readers access to our incisive coverage of local news, food and culture with no paywalls.
Make a one-time donation today for as little as $1.