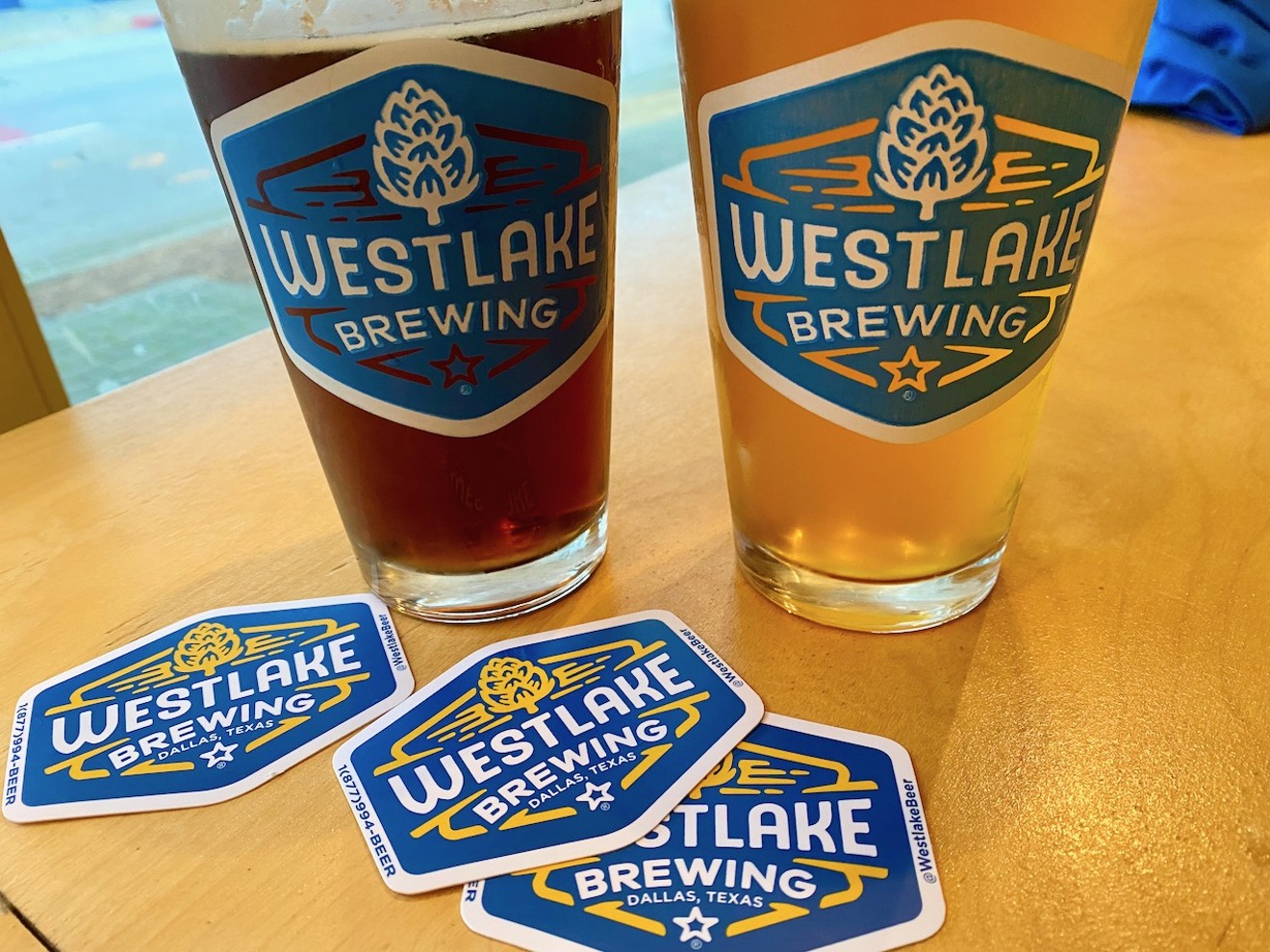 If you go to Westlake Brewing Co., they will give you stickers. Lauren Drewes Daniels
About 30 runners gathered outside Westlake Brewery Co. for a recent cool Wednesday evening for a self-paced out-and-back along scenic Swiss Avenue. No one was racing here. It's a casual trot with friends and neighbors, with cold beers waiting at the finish line. Dig a hole, fill it up. That's how most running works.

Afterward, faces glistening from a light sweat gather around tables with pints of beer, squares of paper and pens in front of them. Some have giant pretzels or plates of nachos. They're getting ready for group trivia, a fast-paced, pop-culture, general knowledge-friendly game hosted by a funny 20-something-ish with a microphone in the center of the room.  It's a good time. Easy and spacious. Different parties around the room lean into their own conversations. The founder makes the rounds regularly, refilling beers or passing out stickers, as many as you'd like. Westlake Brewing Co. founder Art Harvey
Lauren Drewes Daniels
Art Harvey, 46, grew up in Baton Rouge and attended Lousiana State University where he studied engineering. His dad was a homebrewer so he always had an interest in making beer; growing up in Louisiana where the drinking age is 18, he got an early start. Brewing was just a hobby as he spent 15 years in the semiconductor industry and another seven in music.

In 2016, he was on his usual six-mile Friday run with a neighborhood group. Along the route, perhaps with a runner's high, another runner and friend convinced him to take the beer plunge. Go all-in (huff-puff). Open your own brewery (huff-puff).

After that run, Harvey knew it was time to start cutting those safe, yet restrictive ties to the corporate world. He found a beer home in an old building in Deep Ellum; he was partial to the area because it wasn't far from his own neighborhood, Lakewood. Plus, he felt like the proximity to other brewers would be advantageous for all of them.

It took an entire year just to get a permit from the city of Dallas to start building. Seven months for the zoning approval. Westlake Brewing Co. finally opened in October 2019. 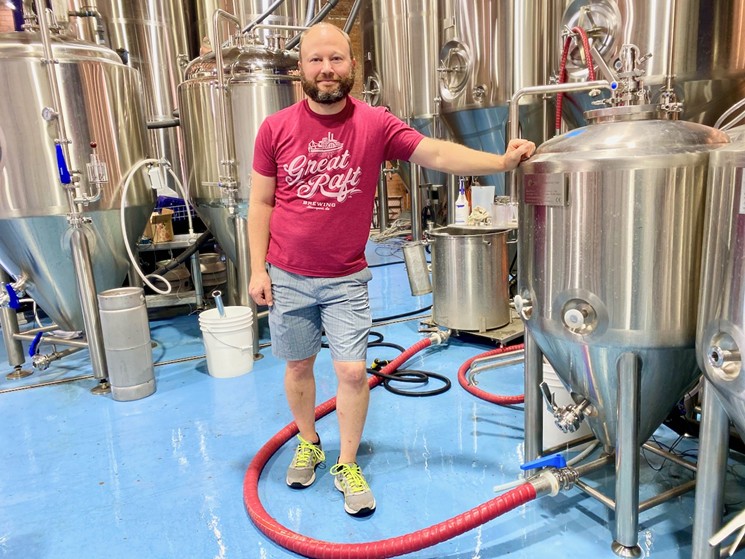 Peter Hemmingsen sporting a Louisiana-based brewery T-shirt, a nod to the camaraderie across the industry.
Lauren Drewes Daniels
Peter Hemmingsen, 42, went to college in Italy where he developed a taste for dry Italian wine. He actually didn't like beer until he had his first IPA. However, his dad, who was also a brewer, didn't like IPAs, so he told young Peter to go make his own.

That sent Hemmingsen down a brewing rabbit hole.

"Soon, I got immersed in it. Then, I got overwhelmed trying to start my own brewery," Hemmingsen says.

He decided to get experience with other breweries and took an assistant position at Bitter Sisters Brewing Co. in Addison, where he says, "I cut my chops." He moved to Oklahoma for his first head brewer job, where managing 600-gallon batches built confidence. Wanting to immerse himself deeper into the brewing culture, he moved to Colorado for more experience before being hired by Harvey at Westlake early in 2019.

Pandemic Not in the Business Plan

A few years after that fateful 6-mile Friday run, Harvey was finally opening the brewery in Deep Ellum and had no idea that in just a few months a pandemic would hit, placing the world on an extended pause.

"Well, we didn't have a pandemic in our business plan," Harvey says. "It took the wind out of our sails, for sure. But, you know other brewers had told us to be prepared to grow faster than you think you're going to." That's advice he did include in his business plan, which allowed them to stretch through the pandemic.

They also already had a large patio and a kitchen, giving them more latitude to be open. A canning line, something they had planned to invest in eventually, was purchased sooner than expected. And Whole Foods picked them up for retail sales, which helped too.

All-in-all, the first year under the weight of a pandemic was bad, but not awful, and things are starting to pick back up.

"We get a lot of travelers," Harvey says. "I'm always amazed at how many business travelers we get brewery hopping. They come in either right before a flight or as soon as they land."

Harvey says many tourists or business travelers find them by just using a map: A big draw is that there are now three breweries all in walking distance in Deep Ellum. "It becomes a destination for travelers," Harvey says. The Hugenormous Pretzel is a house specialty, made from scratch to order.
Westlake Brewing Co.

When asked what their flagship beer is, Harvey and Hemmingsen thoughtfully squint across the table at each other, each waiting for the other to answer.

They agree that they don't have a particular favorite, but rather make a variety of styles as "best" as they can. A mix-tape of beers, not too heavy on any particular kind, like say, sours or IPAs.

Their most popular beer is Rain Out. Most beer names having something to do with running: There's a Fast-n-Light (2.8% ABV), Finish Line is a grisette (5.5%ABV), Texas Trail is an English mild brown ale. Here's hoping that their Belgian-style triple "This Many" isn't from being asked, "How many fingers am I holding up?" Maybe it's the 7.9% ABV — that many is "this many."

Building on the popularity of Rain Out and "in the vein of Dallas weather," they also named a beer "Delkus" (an 8% IPA) hoping that the local weatherman would come down and have a beer with them. You know, take his jacket off, just relax for a bit. Hasn't happened yet. It is spring, though, so maybe the local meteorologist has to stay close to the office.

Harvey also wants the brewery to be a neighborhood space, and it does have a good community feel. Short of going around and asking the 20-somethings there during trivia, "Where do you live, Sugar?" it was hard to be certain, but it felt like a good number were downtown residents.

In addition to the running and trivia, they host Saturday morning yoga in their big courtyard and game nights on Tuesdays. But really, Hemmingsen says, "I just want Pete Delkus to come down and have a beer."
KEEP THE DALLAS OBSERVER FREE... Since we started the Dallas Observer, it has been defined as the free, independent voice of Dallas, and we'd like to keep it that way. With local media under siege, it's more important than ever for us to rally support behind funding our local journalism. You can help by participating in our "I Support" program, allowing us to keep offering readers access to our incisive coverage of local news, food and culture with no paywalls.
Make a one-time donation today for as little as $1.