The Best New Dallas Restaurants of 2017 (So Far)

The causa limena at Lima Taverna, a new Peruvian restaurant in Plano, is a layered seafood and potato salad. Kathy Tran


It's been a big year in Dallas dining, and it's only half over. Local concepts are expanding, big-name chefs are betting big on the Dallas market, hot neighborhoods like Deep Ellum are seeing greatly expanded dining options and the city's international food offerings are growing to include food from countries that haven't always had a presence in DFW.

As we head into the second half of the year — with a crop of highly anticipated new restaurants opening over the next few months — we look back on the first half of 2017 and the new restaurants that are putting out delicious, inventive fare. From tacos to Peruvian seafood to traditional Filipino fare and trendy poke, these are the best new DFW restaurants of the year to date. (See the full slideshow.) 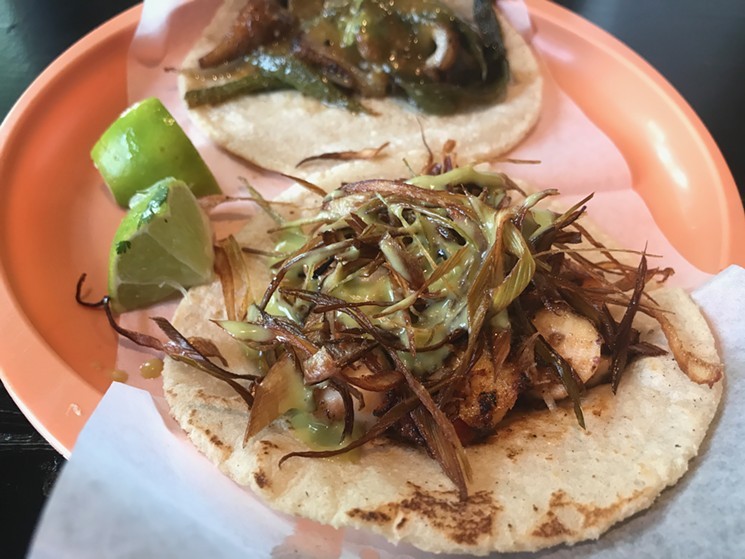 Revolver Taco Lounge finally opened its second DFW location on Main Street in Deep Ellum, and the restaurant is already a hot spot for creative tacos like seared duck and the pulpo (pictured), made with Mediterranean octopus.
Beth Rankin
Revolver Taco Lounge
2701 Main St.
There are a lot of taco places in Dallas but only one that makes specials like Kermit in Bangkok, with frog legs in housemade Thai curry sauce, or a birria guisado of 30-day-old kid goat. Revolver Taco Lounge is a defiant challenge to the rest of the Dallas taco scene: Up your game and get creative.

It's getting the basics right, too, like terrific housemade corn tortillas just thick and cushiony enough to support the generous heaps of filling. But what makes Revolver exciting are the twists, like a ceviche menu almost as long as the taco list, including a great scallop crudo and some killer oysters. The back room, Purepecha, is a reservations-only seven-course tasting menu ($85), which might feature phenomenal lobster tacos, seared duck breast in a rich mole rojo and a tres leches cake prepared by chef-owner Regino Rojas’ mother, Juanita. 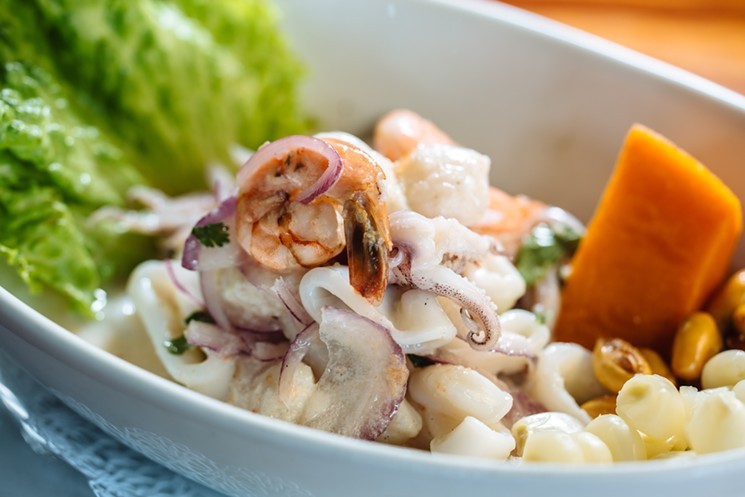 Start with one of the diverse and ultrafresh ceviches, which can get fiery with lime and hot peppers. Then it’s on to culinary riches like a great seafood combination stew, pescado a lo macho; grilled beef hearts; or one of Plano’s best grilled pork chops. Add in ultrafriendly service, stylish plating and terrific pisco sours, and Lima Taverna transcends its humble strip-mall setting. Nick Badovinus' massive, over-the-top Design District steakhouse has quickly become one of the city's best.
Kathy Tran
Town Hearth
1617 Market Center Blvd.
Dallas has a new special-occasion hot spot. Town Hearth is loud, raucous, hard to get into, deliriously fun and kitted out with 1970s Ducatis, its own private barrel of Eagle Rare bourbon and a decommissioned minesweeping submersible in a giant fish tank. Town Hearth boasts more chandeliers than a French chateau and a 1961 MG in the kitchen.

Also, the food is pretty killer. It’s a meat-heavy menu, from the enormous Lenox (a bone-in prime rib for $95) to crispy-fried oysters and tater tots loaded up with lump crabmeat. Steaks are grilled perfectly to order, the tots have great crunch and the beef carpaccio is gaining a citywide following. There’s a well-maintained dry-aging program for steaks, a robust cocktail list and even the occasional vegetable. Junction Craft Kitchen, a new Deep Ellum restaurant, melds Asian flavors with classic Southern fare — as in its shrimp and grits with sous vide octopus.
Beth Rankin
Junction Craft Kitchen
2901 Elm St.
Kitchen LTO started in Trinity Groves with an ambitious goal: to completely swap chefs, concepts and decor every several months, effectively launching a new restaurant several times a year. Over time, LTO started keeping chefs and artists on a little longer than originally planned, but it struggled in the West Dallas restaurant incubator Trinity Groves. In July 2016, the restaurant closed. In October 2016, LTO was resurrected in Deep Ellum in the former home of Twenty Seven. Its first chef: Josh Harmon, whose menu focused on a fusion of Asian and Southern fare.

LTO has always been flexible. So when Harmon's menu struck a chord with both diners and with LTO owner Casie Caldwell, she scrapped the limited-time-only concept and made Harmon her partner. Junction Craft Kitchen still pulls a lot from Harmon's LTO menu but expanded, giving Harmon more room to experiment.

And at this space, experimentation is necessary: Junction has neither a walk-in nor a freezer, so Harmon has to get creative. It also means everything coming out of the kitchen is impossibly fresh, with complex flavors resulting from Harmon's experiments with fermentation.

With a little room to stretch, Harmon's food sings. The fusion of Asian and Southern flavors has proven to be a perfect calling for him. Housemade black kimchi, boudin bao, shrimp and grits with sous vide octopus, warm potato salad with smoked kimchi — Junction's menu is a fun dive into the magic that can happen when the flavors and textures of Southern and Asian dishes come together. On Monday, June 26, Harmon is teaming up with fellow fermentation aficionado Misti Norris for a Petra and the Beast pop-up that's guaranteed to get funky in the best possible way.