Big, Flashy, Delicious and Ridiculous, Town Hearth Celebrates All That Is Dallas About Dallas 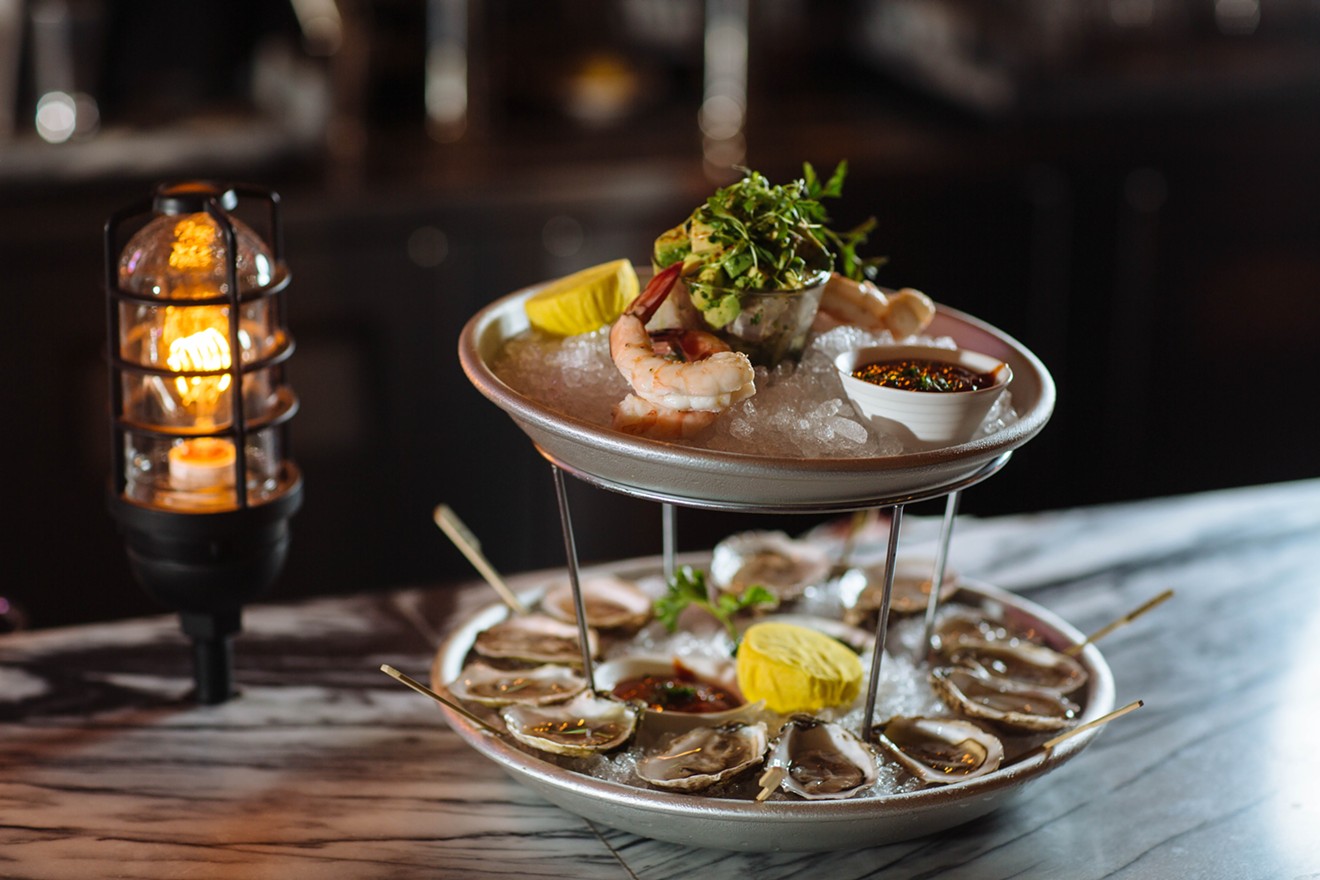 Town Hearth may specialize in high-end steaks cooked over an open flame, but there's also a raw bar with at least six different types of oysters. House-made pasta, prime-cut steaks, fresh seafood — Town Hearth doesn't hold back. Kathy Tran
Town Hearth is a ridiculous love letter to a ridiculous city, a monument to Dallas-sized ambitions, cars, hair and egos. Beautiful, loud-talking people congregate here in absurd shirts, poofy dresses and hair products sturdy enough to survive hailstorms. Town Hearth feels like the kind of place that will appear on national television (please, Rachel, make it on The Bachelorette) as a yee-haw example of Texan excess. The place feels so ironic that it circles right back around to being giddily sincere.

Town Hearth’s decor has everything, too. Not content with 64 chandeliers? How about vintage Ducatis and a 1961 MG? What about a perplexingly huge thicket of old sports trophies on every available surface? Oh, and the giant fish tank contains a real minesweeping submersible. 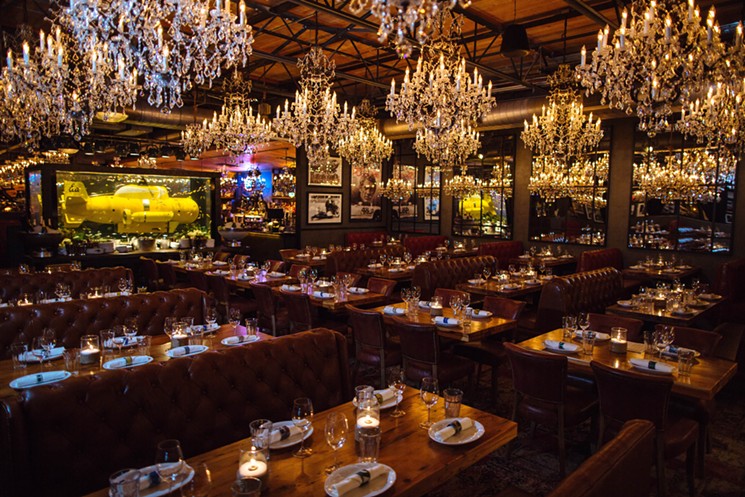 Town Hearth's over-the-top decor has it all, from 64 ornate chandeliers to vintage Ducatis mounted above the bar to vintage sports memorabilia and even a minesweeping submersible in a custom-made tank.
Kathy Tran
Luckily for us, the food matches the people-watching – and the often-hefty price tag. Aging is the norm for Town Hearth’s steaks, with even a relatively cheap cut like the Delmonico ($59, and yes, that’s relatively cheap) dry-aged for 45 days. They know what they’re doing with the meats, too. That Delmonico is flawlessly cooked to order – my medium rare request translated into a blissful burgundy-pink from one edge of the meat to the other – and seasoned with nothing more complicated than salt and pepper.

Another simply gorgeous pile of meat: the Lenox ($95), a bone-in prime rib big enough to serve four people with a few sides, and available only on Friday and Saturday nights. The medium rare request was again honored perfectly and the steak’s tender fat was beautiful to behold, but the stars were the charred end bits, which tasted richly of smoke and open flame.

A friend who grew up on a farm especially enjoyed the Lenox. “This reminds me of home,” he told me. “This is corn-fed beef, not grass. You can taste it.” In case that intense grilled meatiness isn’t enough, the dish comes with jus and a horseradish cream sauce that’s sadly got much more cream than horseradish.


Town Hearth is a ridiculous love letter to a ridiculous city, a monument to Dallas-sized ambitions, cars, hair and egos.

The best appetizer for steak is, of course, beef carpaccio ($18), and Town Hearth’s has already earned a reputation around town for its excellence. That’s in no small part thanks to the well-considered sprinkling of balsamic reduction and crunchy gremolata on each thin slice of meat. The crispy fried oysters are addicting too ($18), served on an escargot dish. The tiny cups are filled not with snails but a mix of kale and aioli, tasting like the adult version of spinach artichoke dip.

There may be no more Dallas menu item in Dallas than “tots du jour,” a rotating tater tot feature that’s usually hilariously over-the-top. Think tots with beef bourguignon or, as on my first visit, “tots Oscar” ($21), which is, yes, tater tots with béarnaise sauce and entire claws of fresh crab meat. The taters are crisp, salty and childhood-nostalgia-inducing, while the crab, equally perfectly cooked, is a reminder that we’re all grown-ups now, and that some of us have way too much disposable income.

A more mature side dish choice, maybe, would be asparagus ($12), grilled and topped with gremolata for crunch, or, even better, the mushrooms ($12), cooked till perfect and served in an herbaceous and meaty veal jus gravy. The “mixed tomatoes and burrata” ($18) is a noteworthy salad combining good heirloom tomatoes of nearly every size and color with somewhat salty cheese, greens and paper-thin slices of shallot. The white cheddar macaroni ($12) is plenty good too, but it’s far from the tastiest or gooiest in town. 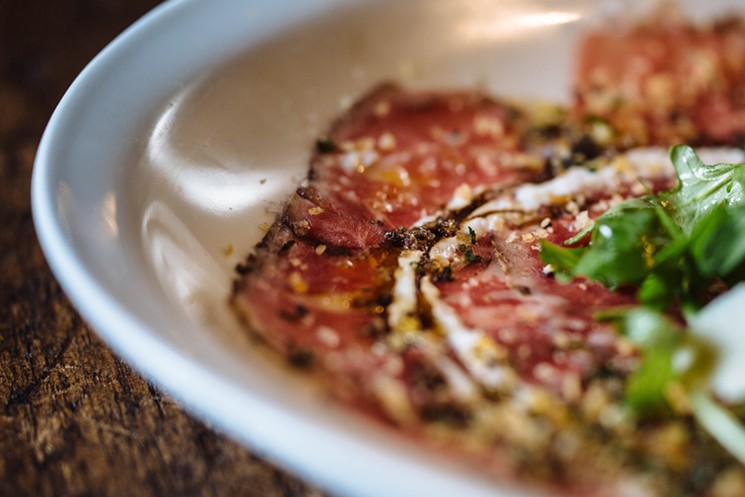 Town Hearth's beef carpaccio ($18) has quickly proven to be one of the restaurant's most memorable starters.
Kathy Tran
One thing Town Hearth doesn’t care so much about: dessert. I was thinking this would be the kind of place to revel in an 11-layer chocolate pecan cake with bourbon habanero glaze, but on my first visit, our server simply asked if we were ready for the check; when pressed, she admitted that there were indeed desserts available.

On my second visit, we finally tried one: a slab of devil’s food cake the size of a loaf pan ($9). Even shared by the whole table, it was so moist, so indulgent and so deliriously rich that I felt queasy later.

A bigger flaw is the wine list. While the cocktail program is full and festive, wine is tougher; there’s not one cheap bottle of bubbly, for instance, and there are just two varieties of malbec, the perfect wine to pair with steak. Most of the offerings concentrate on a small handful of pricey, prestigious regions and styles.

Town Hearth deserves credit for many things, including superb food, but the main virtue is this: It’s fun as hell. High-end Dallas restaurants have a bad case of pretentiousness, and across downtown and Uptown, waiters are delivering little lectures along with the food, explaining dinner in art-museum-plaque detail. That’s not the style of this new restaurant, or of chef Nick Badovinus’ other joints, Off-Site Kitchen, Montlake Cut and Neighborhood Services. 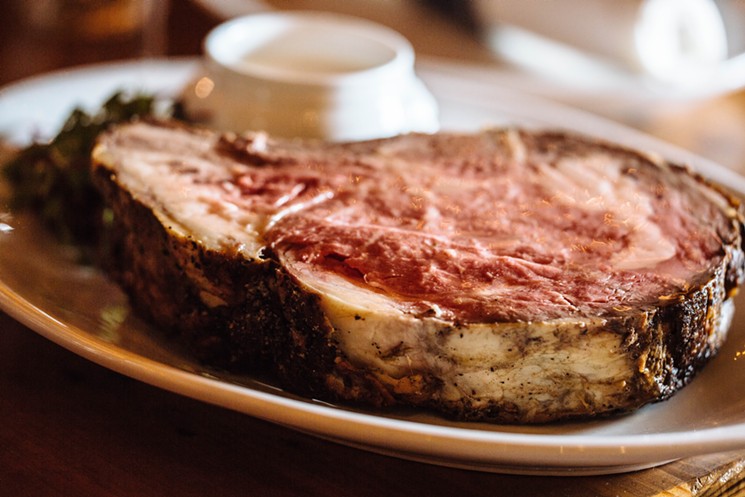 You'll spend a pretty penny on steak at Town Hearth, but it's likely to be worth the splurge.
Kathy Tran
Make no mistake: Town Hearth charges special-occasion prices. But it’s fun, boisterous, giddy and infernally loud. A '74 Ducati Sport is listed on the menu as a "primo side," available for the oh-so reasonable price of $75,000. Hand-picked vintage baseball and football games play over the bathroom speakers. It has an actual submarine. It’s a different kind of night out. On my second visit, we really got into the spirit. One friend donned a one-shoulder dress with big black ruffles; another plucked the flower out of a tiki drink and added it to his lapel; I arrived in blue suede belt and shoes. We ordered neon-hued cocktails with plastic monkey garnishes, we talked too loudly and we had a grand time.

After devouring an aged bone-in steak, I retired to the men’s room, where country-accented bros in gingham shirts were giving each other a hard time about their pissing skills: “You need Flomax over there?”

And, in that moment, I thought: Truly, it doesn’t get any more Dallas than Town Hearth.