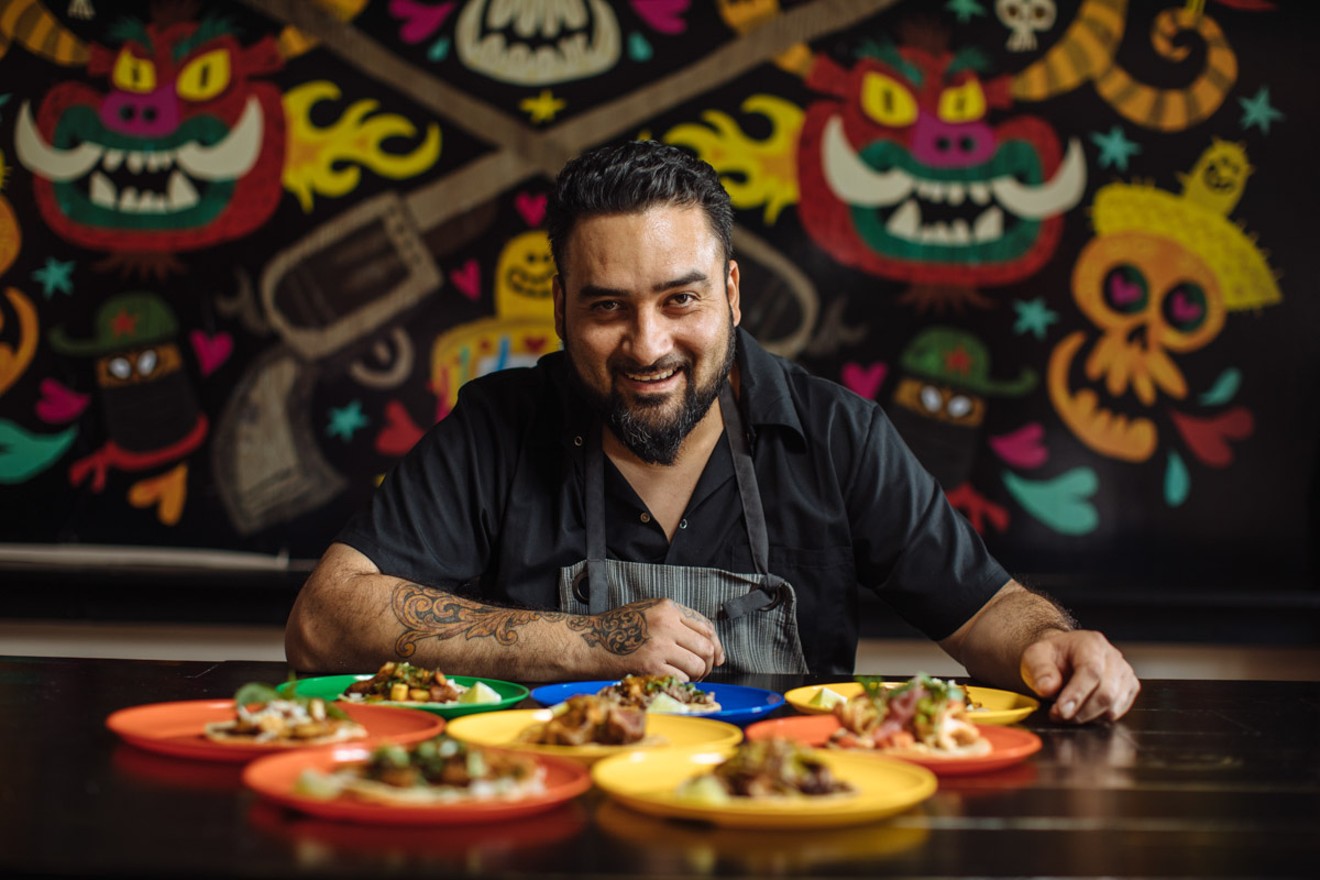 Owner Regino Rojas sits before a spread of tacos in Revolver Taco Lounge. Kathy Tran
Revolver Taco Lounge got its name, according to one story, from the carefully handcrafted designs of legendary gunmaker Arturo Rojas, whose handiwork can be spotted in the back room of the restaurant founded and operated by his son Regino.

But I prefer the other origin story. Revolver Taco Lounge got its name, this account claims, because its tacos al pastor are so pound-the-table delicious that, according to some scientists, the entire solar system has stopped revolving around the sun and started revolving around a kitchen in Deep Ellum.

Assembling a taco al pastor
Kathy Tran
What makes this taco al pastor ($3) so good? Every possible thing. The housemade corn tortillas are as good as they get; there’s no going back to store-bought bags of rubbery discs after trying a fresh, corn-fragrant tortilla made and grilled right before customers’ eyes. The pork is oh-so-tender and bursting with flavor, the way all pork should be. It’s not the least bit greasy. Hot salsa and sweet pineapple joust across the top of the taco, sparring back and forth, held equal in a divine balance that many local taquerias can only dream of achieving.

Balance is the true key to a great taco. A little too sweet, too hot or light on filling, and “great” can turn to “meh” pretty quickly. Too much filling, and a corn tortilla can tear apart. At Revolver Taco Lounge, they seem to be having no trouble hitting the mark.

Hugo Galván holds out a plate with Revolver's pulpo (octopus) taco.
Kathy Tran
That includes both regulars and rotating specials. Consider the supersized cabrito taco ($7), loaded down with ultra-rich Michoacan-style stewed meat from a 30-day-old kid goat, so generously filled that two of the restaurant’s tortillas are required to corral this meaty monster. Or the pulpo ($4), on which octopus, so tenderly cooked it’s almost airlike, is set beneath fried leeks and an invigorating jalapeño crema. Or an infrequent “Kermit in Bangkok” special ($4), tossing the meat from frog legs in a housemade Thai yellow curry paste and mixing in some toasted almonds to balance the texture.

The pescado taco ($5) is a marvel, the fish battered and pan-fried to a crisp crunch that brings shivers of delight. If Revolver served these mahi mahi fillets in a basket, it would be the best fish and chips in Dallas. Indeed, if all fish and chips were so brilliantly fried, English pub food would be the world’s dominant cuisine. One dining companion took a bite of the pescado taco and began regaling me, Ratatouille style, with childhood memories of her mom’s fish fries.

Even if it only served tacos, Revolver might be one of the city’s more exciting new restaurants. But Regino Rojas is a kitchen daredevil whose ambitions don’t stop there. That’s why, to the surprise of first-timers who haven’t been to the original location in Fort Worth, the restaurant has a list of ceviche preparations as long as its list of tacos.

The ceviche yucatecana ($18), for instance, combines Japanese red snapper with blood oranges, tomato, red onion and a spicy dressing. Oysters ($3.50 per oyster) are a delight, topped with a bit of lime, chile and salmon roe. The scallop sashimi ($18) melts in the mouth and is simply dressed with citrus-infused olive oil and black salt.

Ceviche yucatecana
Kathy Tran
So we’re already talking about probably the most ambitious taco restaurant in Dallas. Duck breast tacos are one thing; superb ceviche is another.

And then there’s the back room.

Guarded by a life-sized cardboard cut-out of Princess Leia, Revolver’s back room, Purepecha, is available by reservation only. It serves a seven-course chef-choice tasting menu ($85) of hugely ambitious food that demands to be compared to local fine-dining powerhouses like Flora Street Café. (It’s no coincidence that many Revolver employees, including general manager Hugo Galván, have experience cooking or managing at places like Flora Street.)

"When I’m sipping chayote soup with corn ash or sampling elegantly plated ceviches, I can’t help feeling Revolver Taco Lounge is one of the most ambitious restaurants in Dallas."

At Purepecha, Rojas often personally waits tables. Here, indigenous Mexican ingredients are the stars of the show, transformed in beautiful ways: chayote squash and sweet corn blended into a creamy soup, dotted with pickled corn kernels and served with tiny dollops of fiery corn ash; chapulines (grasshoppers) ground into a powder and sprinkled across the top of the vibrant, lime-heavy guacamole to add a savory note; huachinango (fresh red snapper) in a sterling ceviche with grapefruit and tangerine-infused olive oil, garnished with sunflower sprouts.

There are two moles, cilantro-based verde and the classic rojo, the latter of which is one of the deepest and most complex I’ve ever tasted, both prepared by Rojas’ mother, Juanita. Juanita Rojas also gets credit for the delicious tres leches cake.

A seating area at Revolver Taco
Kathy Tran
There are tacos on the tasting menu, but they’re likely to include things like Miyazaki A5 beef so well-marbled it puts actual marble to shame, sliced thin and served with roasted onion, pepper, tortilla and little more. Or, even better, a luscious lobster taco with a crema that, despite containing jalapeños, isn’t nearly spicy enough to overwhelm that rich flesh.

A meal at Purepecha can be a lesson in great ingredients; it achieves fine balances between sweet, sour, spicy, savory and bitter. On my first visit, though, a sous vide-cooked pork tenderloin dotted with raspberry gelée stuck out in a bad way — overcooked past well-done. It sticks in my memory as an inexplicable failure, but it was also the only one and very easy to fix.

Revolver Taco Lounge is still working out some consistency issues. I’ve noticed ceviches get more or less salty from visit to visit, and one ceviche platter had sad-looking under-ripe tomatoes. One round of oysters might have varying seasoning on each half-shell. On every visit to the front room, the restaurant ran out of at least one menu item.

Inside Revolver Taco Lounge
Kathy Tran
These are minor issues, but they separate the very good restaurants from the great ones. They also give Revolver more goals to fulfill, which should suit its hyperambitious kitchen.

When I dig into one of those incredible tacos al pastor or de pescado, I’m sure there aren’t many better tacos in this city. When I’m sipping chayote soup with corn ash or sampling elegantly plated ceviches, I can’t help feeling Revolver Taco Lounge is one of the most ambitious restaurants in Dallas. When Revolver sees its goals through to completion, the whole North Texas dining scene might revolve around it.