This lone crab cake cost $16, and trust us, it was not worth it. That's a running theme at the new Pl8 Bistro and Gallery in Uptown. Dalila Thomas
When WhiteROC Hospitality Group announced its intention to open a restaurant called Pl8 Bistro and Gallery at Routh Street and McKinney Avenue in Uptown, it did so with the world's most bizarre press release. The new restaurant planned to showcase Dallas artists in a space "featuring a bright, inviting ambiance and restaurant-forward concept." Who doesn't love a restaurant-forward restaurant?

The rest of the language in the release was equally meaningless: "eclectic menu," "an exquisite selection of plates paired with a wide selection of global wines," "new-aged style," "the best food and drink using the highest-quality ingredients." Local media, the Observer included, couldn't help themselves. D Magazine called Pl8's moniker "the worst name for a restaurant in the history of food," and it was not wrong.

The amateurish rollout of Pl8 seemed equally puzzling since WhiteROC is the same group tasked with opening Circo, a Dallas offshoot of uber-upscale New York restaurant Le Cirque, this spring in Uptown. Circo is described in press releases as a "luxury restaurant and resort" with "two floors of upscale dining and Circo Beach, a resort-style pool and day spa." As if that didn't seem over-the-top enough, the design will include "invigorating design elements reminiscent of a European circus," which begs the question: What the hell is a European circus? There's also the "6,500-pound chandelier atop the grand spiral staircase, as well as views into a hand-painted chocolate truffle room," according to the release, which all sounds very reasonable.

While Circo is still in the works, Pl8 is open, so we gave the bizarrely ambiguous concept a shot — and so far, the hokey name and press release seem to accurately describe the experience.

Here are eight reasons why Pl8 does not seem long for this world:

Lackluster lobster mac and cheese, $18.
Dalila Thomas
8. The name. We’ve talked about this before, but seriously — a moniker like PL8 screams, “We’re trying really hard to make 'fetch' happen.”

7. The scavenger hunt required to find it. OK, so you got past the name. Now it’s time to find the place. Well, if you’re not a Dallas native or you've never been to Fat Rabbit, the Pl8 location's former tenant, there’s very little signage. Actually, we don't recall seeing a sign at all. Yes, there are harder places to get to, but it’s likely you’ll keep driving and visit a McKinney Avenue spot you’re more familiar with, and your meal may be all the better for it.

6. The "gallery." Pl8 incorporated the word "gallery" into the title and made a big deal of the art as a tentpole for the concept. But good luck spotting any exquisite works — it’s far too dim inside the restaurant to view any of the art that’s on display, which kind of makes it pointless.

5. The prices. So you’ve gotten over the barely visible art because you’re really there to eat — it is a restaurant-forward restaurant, after all. Once you crack the menu, you’ll learn that pretty much everything except for desserts is shared plates. We’re talking salads starting at $15 and a mediocre crab cake — that's cake, not cakes — priced at $16. We won't even get into the $14 al pastor tacos.

4. And then there’s the $18 lobster mac and cheese. Get ready for sad mac topped with loads of lackluster lobster. 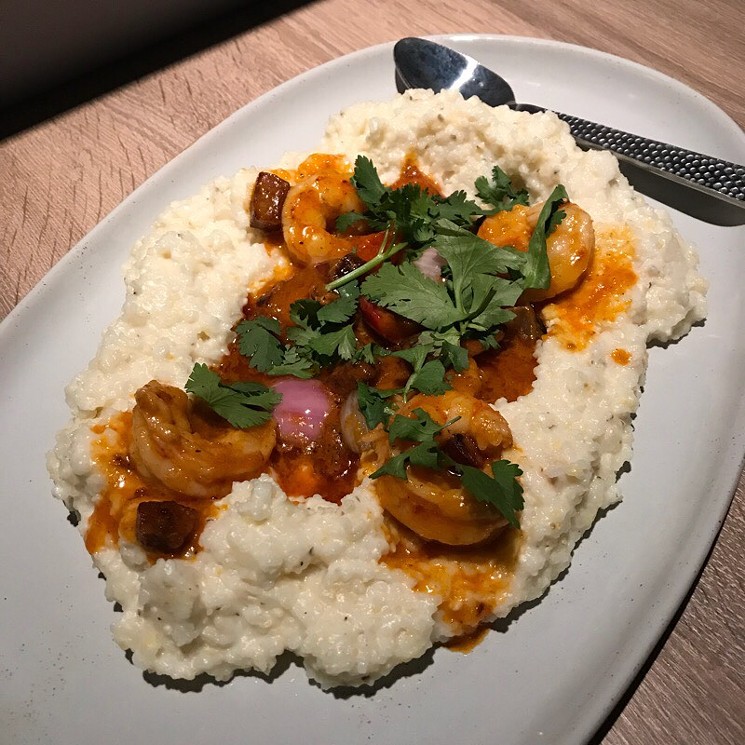 Shrimp and grits, meet plate — or rather, Pl8.
Dalila Thomas
3. Because everything is sharable, menu items are plated as such. To accommodate this serving style, the shrimp and grits were served on a plate.

2. The menu is all over the place. Tortas, gyros, pad Thai, butter chicken, a Cuban, Armenian pizza, lasagna bolognese, a separate menu of tacos — what is happening here, exactly? And how do we make it stop? This isn't just a menu lacking cohesiveness; it's a full-on identity crisis.

Beth Rankin is an Ohio native and Cicerone-certified beer server who specializes in social media, food and drink, travel and news reporting. Her belief system revolves around the significance of Topo Chico, the refusal to eat crawfish out of season and the importance of local and regional foodways.
Contact: Beth Rankin
Follow:
Facebook: Beth Rankin
Twitter: @beth_rankin
Dalila Thomas
Contact: Dalila Thomas