Tribal All Day Cafe's Nourish Bowl is a heaping helping of healthy Beth Rankin
In a restaurant scene dominated by steaks, burgers and Tex-Mex, healthy dining options in Dallas have historically been limited. Yet today, probably more than ever, people of all ages and backgrounds are eschewing fryers and mechanically separated pink slime for healthier, more naturally-produced and locally-sourced food.

Our city’s longest-running healthy restaurant is Kalachandji’s. The beloved vegetarian buffet that feels a bit like a spiritual retreat — especially at those outdoor tables next to the fountain — has been operating now for 37 years and consistently shows up on Dallas' “best healthy restaurant” lists. It’s a sanctuary we hope lasts for eternity.

Between 1982 when Kalachandji’s opened and the 2010s, not many health-focused concepts survived. It wasn’t until 2012 that we finally got a healthy drive-thru when working Park Cities mom, Erin McKool, grew tired of not having convenient options to feed her family. She opened Start, advertising organic and alternative dairy, grass-fed beef and organic, free-range poultry on the go. As proof that her concept filled a marketplace need, her third location opened last year in Frisco.

By 2014, two national health-conscious chains had moved in, offering green food with a side of booze: the farm-friendly Denver-based company, Modern Market, and the ever packed by ladies who eat kale True Food Kitchen, based in Phoenix.

Around two years ago, Dallas’ healthy dining options exploded in a proliferation of new, salubrious places to eat. For the purposes of this article, healthy restaurants are defined as those with menus low on refined starches and high on rainbow-colored veggies. Ethically sourced and sustainable proteins are also important to carnivorous healthy eaters. So whether you’re a full-time paleo yada yada or just want an occasional break on the waist, here are the newest places in Dallas to eat green and actually enjoy it.

Recently arrived from Houston with three Dallas-area locations, Bellagreen is an American bistro with chef-inspired seasonal menus served in a setting so elegant it doesn’t feel like the fast-casual restaurant that it is.

Aside from ensuring every location has at minimum three stars from the Green Restaurant Association, they also have an eco-friendly Sustainability in Practice (SIP)-certified wine list. As for food, gluten and grain-free diets can be easily satisfied here with dishes like the current seasonal: paleo spaghetti squash bolognese with 44 Farms ground beef. Shredded spaghetti squash takes the place of pasta in this classic Italian dish covered in a rich tomato sauce of roasted vegetables and beef raised on a ranch just two and a half hours away in Cameron, Texas.

There’s more 44 Farms all-natural angus beef in the “hi-protein hempanadas,” beef and cheese empanadas made with naturally gluten-free hemp flour. There are also pizza, burgers, salads and pastas, all of which can be made gluten-free, along with a few vegetarian options.

Set in Las Colinas’ new 60,000-square-foot retail and dining development named Water Street is Hugo’s Invitados, a stylish, modern Mexican concept with an almost completely gluten-free menu. In addition to a cocktail list with a selection of organic liquors and daily fresh-pressed juices, not one item in the kitchen comes from a can, has been processed in a factory or has seen the bottom of a deep-fryer.

Farm-fresh produce is delivered almost daily from Hardie’s, a long-standing Texas farm distributor. All poultry is free-range, wagyu sirloin is grass-fed, and sustainable seafood includes Atlantic salmon and Mexican Pacific shrimp. The founder and owner is Hugo Miranda, who most recently filled the role as branding director for Meso Maya and was inspired to open his own healthy concept after being diagnosed with Type 1 diabetes.

“Healthy eating is the trend right now,” he says. His goal is to have a place where all guests, or invitados, can enjoy without feeling left out, no matter what their diet. 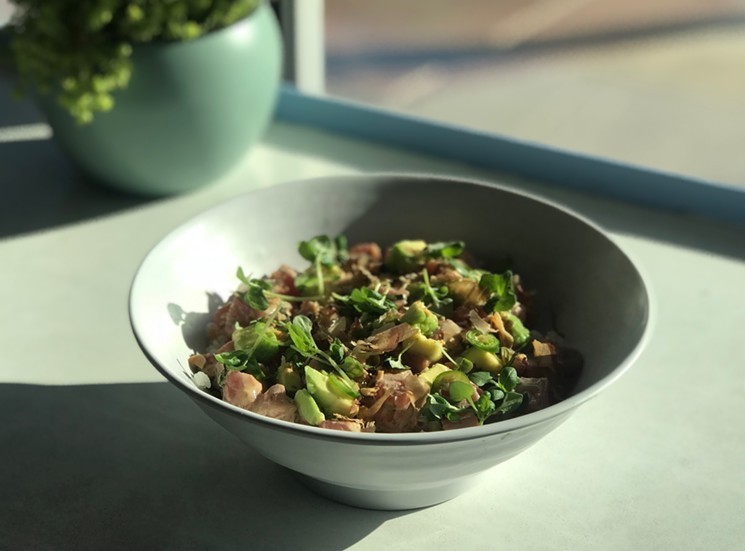 Opened in late 2017, Malibu Poke is already one of Dallas’ most popular fast-casual restaurants coming to us by way of seafood specialist, Jon Alexis, and Dallas golden boy chef, Matt McCallister, who developed the menu. Vibrant California-inspired bowls center around sashimi-grade fish acquired through sustainable fishing and responsible aquafarming practices.

In addition to rice, bases of the bowls include options like seaweed, riced cauliflower and massaged kale,  alternatives that thrill paleo and Whole30 dieters who eliminate grains. Many of the the nine house-recipe sauces made to top the bowls are gluten-free; some are sugar-free. For anyone who can really uphold the Whole 30 diet for a month — eliminating sugar, grains, dairy, baked goods and most legumes — this would be the perfect spot to come most every day, where facial recognition software would spare you from having to repeatedly punch in your order on automated kiosks. Malibu expanded to Austin with their second location around four months ago, and Dallas will soon be getting another location at McKinney and Olive — indicators that if poke was only a trend, it isn’t going anywhere soon.

Elm Street Tattoo co-owner and "Ink Master" judge Oliver Peck saw the need for something beyond burgers and bar food in a neighborhood known for unhealthy indulgence. The venture started by renovating the space formerly known as Zini’s Pizza while Peck’s vegan girlfriend Audra Cabral created the menu. It’s been a hit for vegans and non-restrictive food-lovers alike since it opened in October last year. They will soon be adding Texan vegan-approved beers, making it a spot to either begin a weekday with a kale smoothie or to end the work week with some suds and cruelty-free nachos.

Opening her first two locations within a year, Algerian chef Soraya Spencer brings us Gather Kitchen, a breakfast and lunch quick-serve spot with a menu entirely free of dairy, gluten and refined sugars. Proteins include free-range chicken and grass-fed beef. For breakfast, there are paleo waffles, savory or sweet. Sweet waffles include toppings of fruits, nuts and seeds with dairy-free chocolate sauce or raw maple syrup. Savory waffle options include free-range eggs, sugar-free bacon and cage-free chicken sausage, along with a variety of veggies and guac.

Bowls make up the lunch menu, with the choice to build your own or go with one of Spencer’s creations, like zucchini noodle pad Thai or quinoa pesto with falafel. Desserts are possibly the highlight of all of Spencer’s concoctions at Gather. D Magazine recently published a love letter to the chia seed pudding. During our visit, we tried unsuccessfully to save for later the cacao-rich, gluten-free and vegan chocolate brownie. After one taste test, it was demolished before reaching the car.

With a name like Flower Child, you know there are going to be some quinoa bowls on the menu at this immensely popular fast-casual chain from Fox Restaurant Concepts, the same folks who brought us True Food Kitchen.

Their best-selling Mother Earth bowl is a vegan bushel of produce with ancient grains, sweet potato, portobello mushroom, avocado, cucumber, broccoli pesto, charred onion and greens, dressed with red pepper vinaigrette and a sprinkling of hemp seeds. Along with bowls, there are of course salads, toasts and veggie plates. Carnivores have the option to add all-natural chicken, grass-fed beef or sustainable salmon to any dish on the menu. Flower Child is the place to bring your friends who are on all the diets all the time and say they’re tired of having to choose from one or two things on the menu when dining out. It is also a great place to bring your yoga mat as you can park it in a designated basket, leaving you with more room to reflect on the happy slogans like “Radiate within” painted on the walls while munching on organic produce if it falls on the dirty dozen list.

Lala’s is a health-Mex cafe in Preston Center serving an all gluten-free menu (aside from beers and flour tortillas) along with a separate vegan menu. Instead of queso made with processed cheese, try their blend of Mexican cheeses thickened with rajas arrowroot powder or their own plant-based queso blanco.

Dip organic, non-GMO corn chips in that queso, or grain-free jicama chips or grain-free Siete chips. Wash down the thirst generated from a queso session with an organic margarita made with Dulce Vida organic tequila and zero-sugar triple sec, under 100 calories. There are plenty of ways to get more veggies in your diet here with zucchini-wrapped enchiladas or tacos served on thinly-sliced jicama instead of tortillas. Of all the places on this list, Lala’s is the only one serving organic chicken. Texas grass-fed beef and wild-caught shrimp and cod are also options. Vegetarians can top salads and bowls with grilled hearts of palm or mango al carbon.

Lala’s menu is also free of canola oil and lard, a rarity for a Tex-Mex kitchen. And their fudgy vegan chocolate cake, made with zucchini, maple syrup and almond flour, is not to be missed, especially with a scoop of vegan coconut nice cream.

Tribal All Day Cafe, an expansion of Dallas-based Tribal Juice company, was winner of our 2018 Best Of Dallas best healthy restaurant. While they refrain from labeling diets on their menu, they focus on quality nourishment and “conscious consumption” instead, using “real ingredients” from farms when possible. It sits on the outskirts of Bishop Arts’ shopping square, exhibit No. 1 of neighborhood gentrification. On weekends, it’s full of Instagram models in tennis skirts having cocktails like the Medicine Man: orange, grapefruit and lemon juice mixed with turmeric and vodka. On weekday mornings, a stream of neighborhood locals flow through the door for coffee and migas to go. It may feel gimmicky, but it’s still a great place for healthy food, fun cocktails and beet lattes.
KEEP THE DALLAS OBSERVER FREE... Since we started the Dallas Observer, it has been defined as the free, independent voice of Dallas, and we'd like to keep it that way. With local media under siege, it's more important than ever for us to rally support behind funding our local journalism. You can help by participating in our "I Support" program, allowing us to keep offering readers access to our incisive coverage of local news, food and culture with no paywalls.
Make a one-time donation today for as little as $1.
Amanda Albee
Contact: Amanda Albee