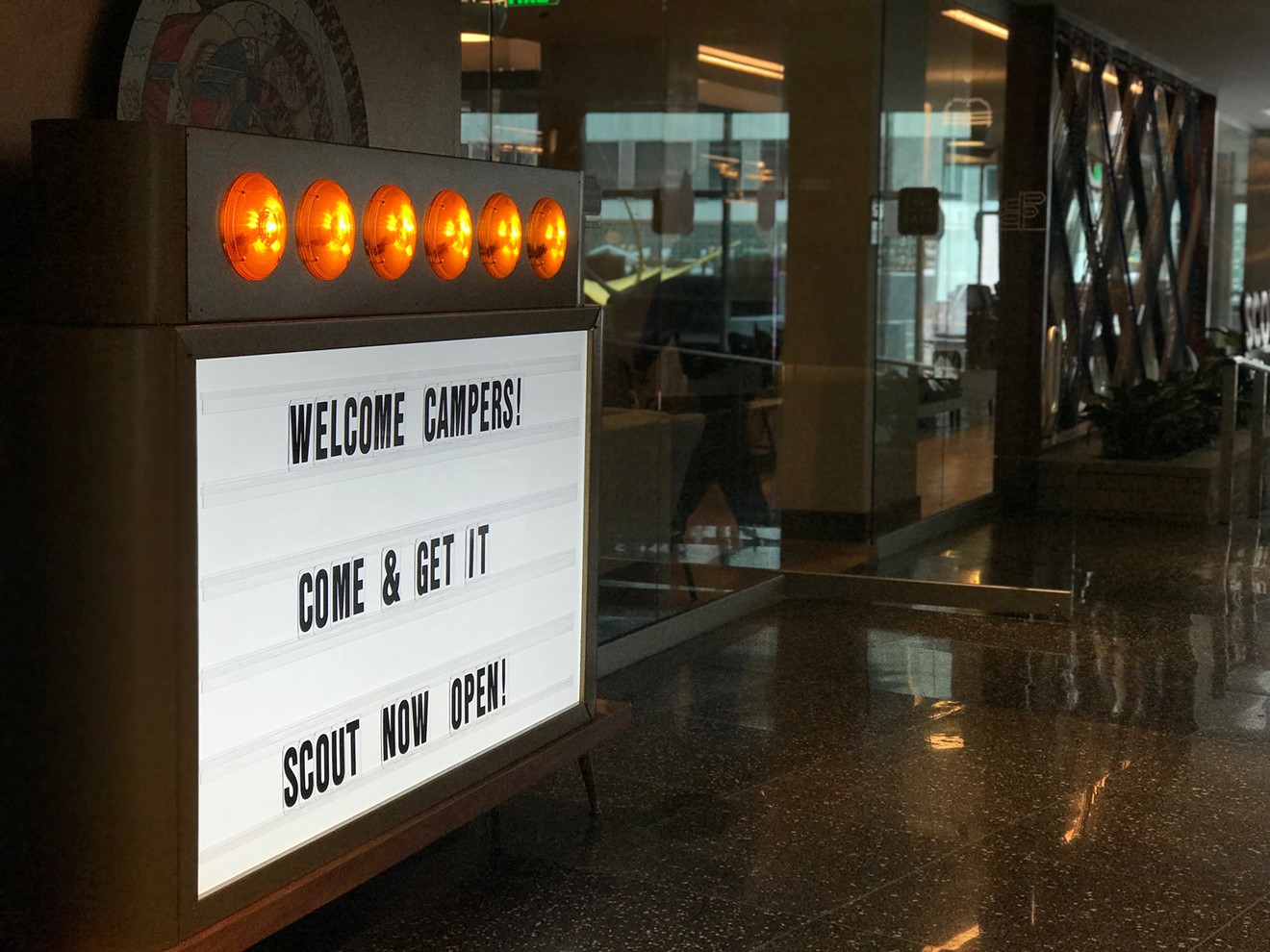 The Statler's new camping-themed "social space," Scout, is open downtown. Beth Rankin
This week, the Statler opened one of several new food and drink concepts: Scout, "a new social space that celebrates the spirit of the great outdoors," according to a press release.

Scout is meant to be a destination for groups, and it shows in the layout, which includes clusters of midcentury modern-ish furniture "inspired by a sense of adventure with ties to American national parks and elements of camping woven throughout," according to the release. "The plaid, forest green wallpaper and wood furniture with textured, earth tone fabrics takes guests back to the 60’s and 70’s, but also has modern facets like the neon sign reading 'Booze & Shoes' located above the satellite bar/bowling shoe rental counter in the back of the hangout." 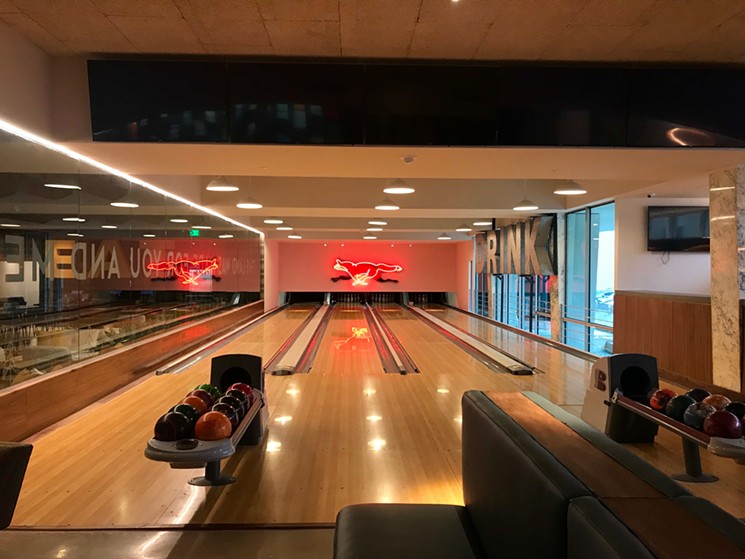 Scout's mini bowling alley has four lanes.
Beth Rankin
If having a beer after work doesn't sound enticing enough, Scout is all about playtime. Leisure doesn't come cheap, though — it costs $40 to rent a bowling lane.

Like the game-time amenities, much of the food is meant to be shared by a group.

"I just kinda wanted to do my version of Americana bar food," said chef Graham Dodds, culinary director for all of the food at the Statler, including modern diner Overeasy and underground speakeasy Bourbon & Banter. From a $75 fried chicken bucket with two whole birds and sides to a $90 "Baja fish taco kit," there are plenty of dishes for sharing. 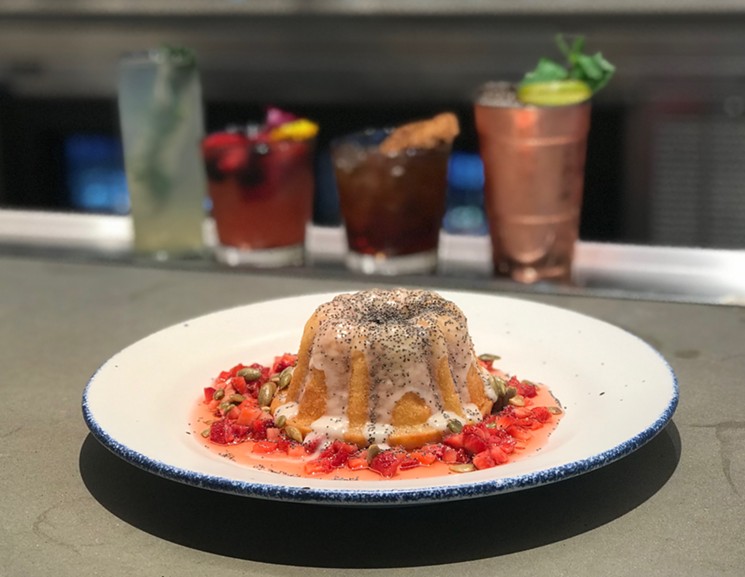 Scout's strawberry short-bundt cake ($10) with lemon-poppyseed glaze.
Beth Rankin
"I always have to do my vegan or vegetarian thing," said Dodds, whose vegan charcuterie board was a hit at the bygone Wayward Sons on Greenville. "You eat [the sloppy Joe], and you think you've just eaten beef. You don't even know."

Beverage director Kyle Hilla oversees a drink program with 20 draft beers and a cocktail menu with "reimagined classics like the Pack Leader, Hilla’s take on a margarita, with tequila, Cointreau, agave, lime and a hibiscus ice cube that filters into the drink as it melts, and the Hummingbird, a floral 'French 76' with vodka, crème de violette, lemon, lavender bitters and bubbles," according to the release. Three of the bar's nine cocktails can be ordered in pitchers to share with large groups. 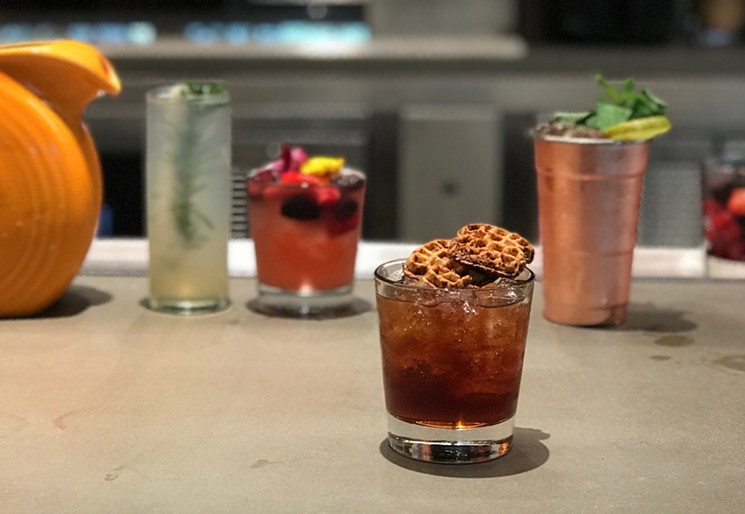 The Merit Badge ($13) is made with pecan-infused Wild Turkey 81, maple, angostura bitters and burnt waffles.
Beth Rankin
With group-friendly food, drinks and things to do, Scout is tapping into a trend of "adult playgrounds" meant to entice diners to hang around a while. These concepts seem to be doing gangbusters all around Dallas-Fort Worth; now, the Statler's brought the fun downtown.