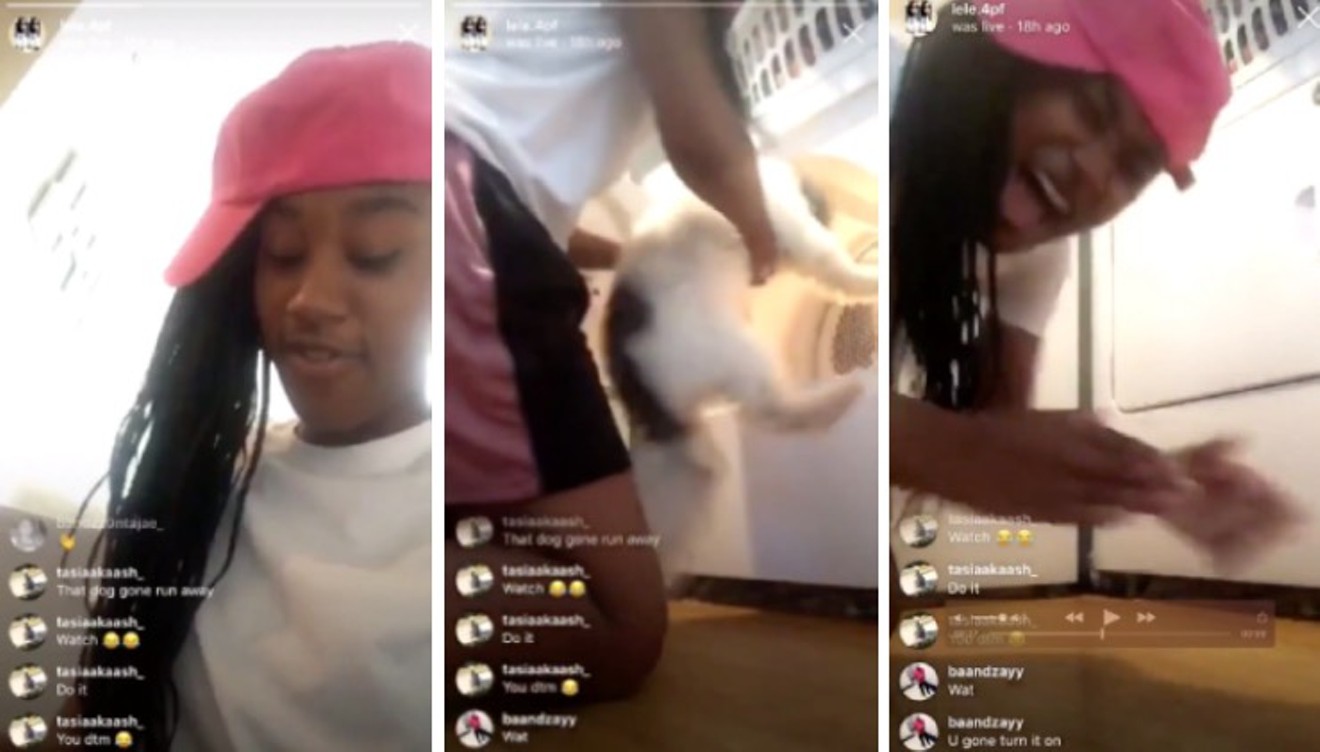 Dallas Police investigators are trying to locate the woman in an Instagram video who put her dog in a running tumble dryer. Screenshots by Danny Gallagher
A disturbing Instagram video that went viral over the weekend caught the attention of the Dallas and Lewisville police departments.

A live stream of an unidentified female juvenile putting a small, white dog in a dryer, and laughing as the dog is tossed around inside it, received a massive amount of attention on social media. Reports of the video led animal cruelty investigators to Lewisville, where local police say they have identified the underage female in the video.

Officials from the Dallas PD and Society for the Prevention of Cruelty to Animals (SPCA) of Texas first confirmed Monday morning that investigators were working to locate the owner of the dog after they received calls about the video and reading several replies to the video on Twitter claiming that she lived in the Dallas area. Dallas Police investigators identified the girl in the video, confirmed that the incident happened in Lewisville and turned over their investigation to the Lewisville PD.

Lynn O'Donnell, the Lewisville PD's public information coordinator, says Dallas officers first identified the underage female but neither police department will release her name because she is a minor.

"Through their diligent work, Dallas PD identified the individual involved," O'Donnell says. "She will not be publicly identified as she is a minor. Our investigation into the case is in its early stages."

O'Donnell also says investigators are handling the case and pursuing charges of "cruelty to non-livestock animals."

The video first went online sometime on Saturday, Aug. 10 on Instagram under the account name "lele.4pf." that appears to have been taken down from the social medial platform. The underage female in the one-minute video starts the stream by looking in the camera and saying to her audience, "I'm fixing to do it, put (unintelligible) ass back in the dryer."


The woman bends down to pick up the small, white dog and places it head-first into the dryer. The dog turns around as the woman screams and closes the dryer door in the dog's face. She reaches up to the dryer knob and turns on the appliance. Thumps emanate from the dryer as the dog is tossed around in the darkness. The unidentified girl claps and screams with laughter.

The dryer runs for about six seconds until she opens the door still cackling at her pet. The dog is thrown one last time against the bottom of the door frame as the dryer comes to a stop, jumps out of the dryer and runs out of the laundry room.

"I did see the video and it was horrifying to watch," says Maura Davies, the vice president of marketing and communications for the SPCA of Texas. "It's never OK to put an animal in a dryer. I really appreciate the diligent and quick work done by law enforcement in this case the Dallas and Lewisville police departments. I know both are taking it extremely seriously."

Twitter users started sharing and commenting on the disturbing video shortly after its posting. The video started to go viral when social influencer and YouTube star Daniel Keem, also known as @KEEMSTAR, who hosts the YouTube news show DramaAlert shared the video with his followers after receiving a notice from an Austin Twitter user who only wished to be identified as Malissa K., @sasaaok. She was one of the first to bring the video to Twitter's attention. Keem's retweet instructed the internet to "do your thing." Replies followed with claims that the woman in the video goes to school in the Dallas area.

"Of course, I was very upset," Malissa told us in a private Twitter chat. "We have no idea who this girl even is. So even if I tried to report her, her dog wouldn't have even been helped at all."


Other videos surfaced of the same unidentified minor defending herself to her livestreaming audience for putting her dog in the dryer.

"I put him in the dryer because I just took his ass for a bath and that's what you're supposed to do," the woman in the video says. "I didn't even put it on 20 or 60 or none of that shit."

"That's when I decided to say something about it because she kept saying, 'The dog was fine and blah blah,' Malissa wrote. "I screen recorded the live (video) and posted it to bring awareness to the incident."

It's also not the first time the girl in the video has put her dog in the dryer, according to other Instagram videos that have since surfaced on Twitter. Another live video shot on Instagram shows her putting the dog in the dryer, setting the timer and turning it it on, followed by the sound of loud thumps. She looks into the camera and screams with laughter.

Davies says animal abuse cases are not limited to just one geographic area in Texas or the nation.

"It's not limited to any neighborhood," Davies says. "Animal cruelty seems to exist everywhere unfortunately and it's always hard to see. We're always thankful that there a good laws in the state of Texas that help protect animals and there are groups that are always looking to improve those laws to further protect animals. It's always our hope as the SPCA of Texas that anyone who perpetrates animal cruelty is prosecuted to the fullest extent of the law."

Davies also encourages anyone who witnesses or has information on cases of animal cruelty whether they see them on the internet or in their neighborhood to report them to authorities to prevent and protect animals from future abuse.

"Whoever has concrete information about animal cruelty, we urge those individuals to go to local law enforcement agencies," Davies says. "Animal cruelty often goes unnoticed, because if nobody says anything, those animals may not receive any justice for the cruelty they suffer."
KEEP THE DALLAS OBSERVER FREE... Since we started the Dallas Observer, it has been defined as the free, independent voice of Dallas, and we'd like to keep it that way. With local media under siege, it's more important than ever for us to rally support behind funding our local journalism. You can help by participating in our "I Support" program, allowing us to keep offering readers access to our incisive coverage of local news, food and culture with no paywalls.
Make a one-time donation today for as little as $1.