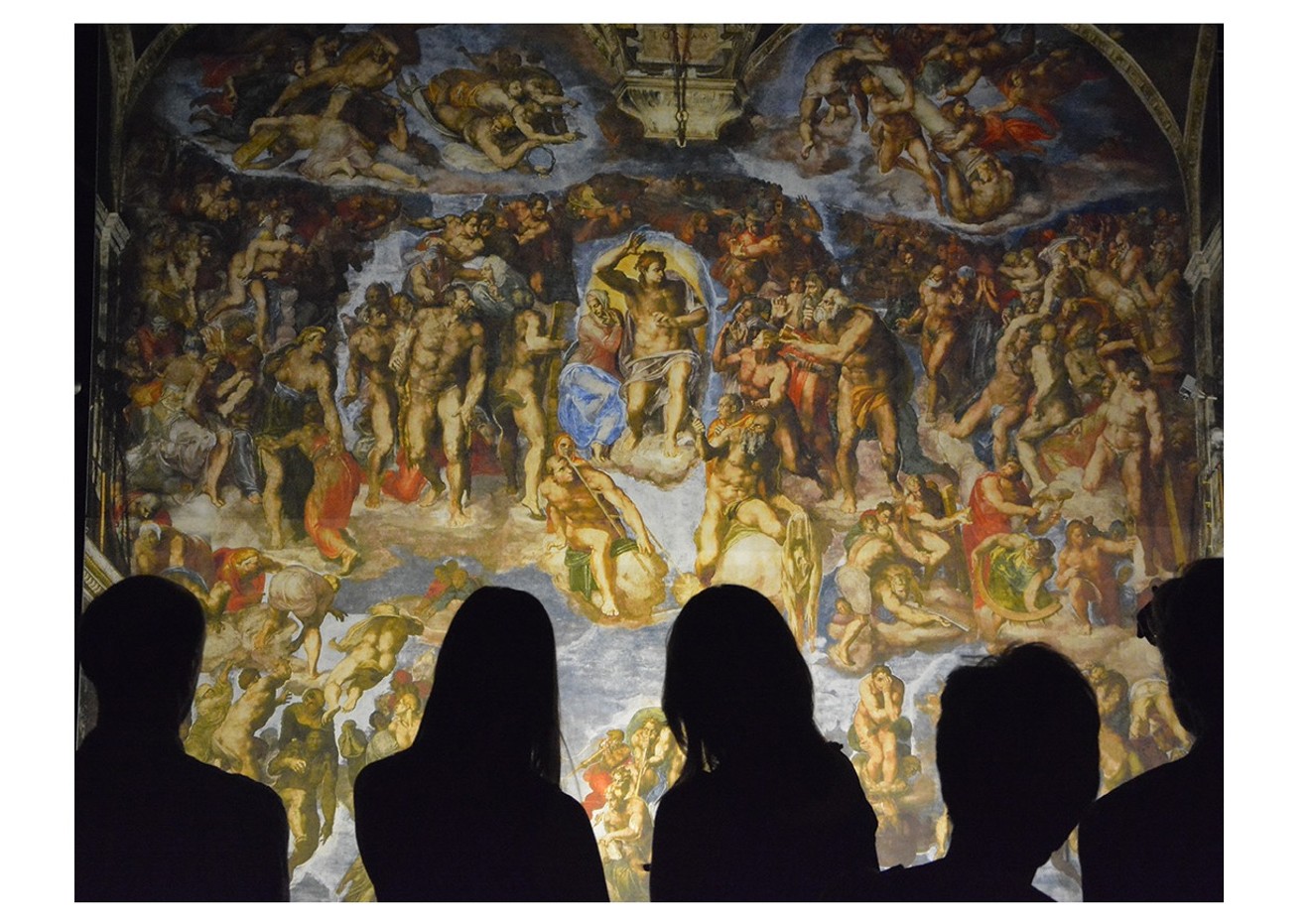 Michelangelo’s Sistine Chapel: The Exhibition at Irving Mall
Can’t get to Rome? No worries, Irving Mall (3865 Irving Mall) is bringing Michelangelo’s Sistine Chapel to you. The 34 frescoes are replicated through high-def photos and give viewers an up-close look at the Italian masterpiece without the airfare. While the idea of a photo replica exhibition is somewhat strange, the detail is fascinating. And we can’t fault making legendary art accessible. The exhibition is wheelchair-accessible and audio guides are available to supplement the accompanying texts. Adult tickets start at $17.50, available online. 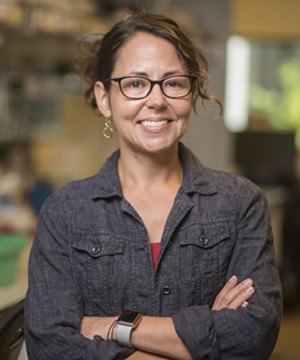 Beth Shapiro makes DNA research extremely cool.
Peter Barreras
National Geographic Live Speaker Series: Beth Shapiro at The Perot Museum of Nature and Science
The Perot Museum (2201 N. Field St.) returns with its National Geographic Live Speaker Series and the kids in us that loved ZooBooks are now adults who are so excited. National Geographic Emerging Explorer Beth Shapiro kicks off the three-part series with “How to Clone a Mammoth” (based on her book of the same name) 7 p.m. Wednesday, Feb. 16. Shapiro is an evolutionary biologist and DNA researcher who combines field discoveries and lab DNA extractions to explore the extinct species and the reasons for their disappearance in order to see how our current environments can affect today’s species on the brink. Tickets start at $49, available online.

The Amazing Acro-Cats at Texas Theatre
A professional animal trainer combines cat rescue efforts with her talent for clicker training to create a live show that funds saving lives and astounds cat lovers. There’s way more to the Amazing Acro-Cats story, including skateboards and hoops, but we only have a short space here to get you to the Texas Theatre (231 Jefferson Blvd.) at 7 p.m. Wednesday and Thursday. The finale? Tuna and the Rock Cats, the world’s only all-cat band. And not just domesticated house cats, but cool cats — as any rock band worth its treats should have. Tickets are $25-$55, available online. For obvious reasons, humans only in the audience.

The How To Be Project: Ten Plays for Racial Justice at Bishop Arts Theater Center
Bishop Arts Theater commissioned 10 Black playwrights to write one-act plays inspired by How to Be an Antiracist by Ibram X. Kendi to create The How To Be Project: Ten Plays for Racial Justice. BAT credits other Black authors such as Ta-Nahasi Coates and Nikole Hannah-Jones, who are with Kendi at the forefront of a dialogue about race in America as part of the impetus for the project, which has now become all the more relevant and necessary with the recent discussion of the actual banning of books by all of these authors because of their focus. Directed by Morgana Wilborn, the one-act showcase takes the stage Thursday, Feb. 17, and runs Fridays through Sundays through March 6. Thursday night’s preview starts at 8 p.m. and tickets are $18, available online.

Ragtime in Concert at The Majestic Theatre
Lyric Stage does a very cool thing where they present productions as concerts. In this case, Ragtime in Concert. It’s the same music and story of the Broadway production (based on E. L. Doctorow’s novel) that tackles poverty, freedom and hope, but pared down with no sets surrounding the performers on stage. They are accompanied by a 19-piece orchestra and well, you. There is full-formed choreography, dialogue and staging and a lot of great vocal and instrumental performance, but it feels like the name suggests: a more intimate concert experience. See and hear the ultimate American tale 7:30 p.m. Friday, Feb. 18, at the Majestic Theatre (1325 Elm St.). Tickets are $38. To purchase and to see other showtimes (it runs Thursday through Sunday), go online. 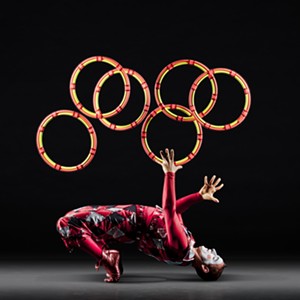 Rent at the Music Hall at Fair Park
Dallas Summer Musicals brings Jonathan Larson’s absolutely adored and award-winning musical Rent to the Music Hall at Fair Park. Seemingly timeless, it follows a year (if you’re a fan, you know how many seconds that is) of struggle and dreams among good art friends. Rent is one of those shows that you never want to ruin for someone who hasn’t seen it, so don’t miss this opportunity (but leave the 13 and unders at home unless you have an open dialogue about sex and other adult topics). The show opens Friday and runs through Sunday. Shows are 7:30 p.m. each night and 1:30 p.m. Saturday (ASL performance) and Sunday. Tickets are available on Ticketmaster. Bartolomé Esteban Murillo (Spanish, 1617–1682), "The Prodigal Son Driven Out," 1660s. Oil on canvas, 41 1/8 x 53 in. (104.5 x 134.5 cm).
National Gallery of Ireland. Presented, Sir Alfred and Lady Beit, 1987 (Beit Collection); NGI.4543. Photo © National Gallery of Ireland.
Murillo: Picturing the Prodigal Son opens at the Meadows Museum
Baroque Spanish painter Bartolomé Esteban Murillo has but one series, or cycle, intact today. And it’s coming to the Meadows Museum (5900 Bishop Blvd.) in an exhibition entitled Murillo: Picturing the Prodigal Son opening Sunday, Feb. 20, and running through June 12. The series was recently restored, revealing information about Murillo’s technique. Two other post-conservation works related to the parable (Luke 15:11–32) will hang with the series. The Meadows is the only U.S. venue to show this important work, so art buffs and historians alike should jump at the opportunity to view it. Museum admission is available for purchase online.

The BLK EXPERIENCE: A Black Lives Matter Pop Up Museum at Urban Arts Center
For weekends in February, curator Jiles King has created a pop-up museum in Dallas proper dedicated to Black excellence, Black lives and Black history. The BLK EXPERIENCE (807 Hutchins Road in the Urban Arts Center) offers eight different ‘gram-able rooms that showcase Black culture in various ways, but combine them into one accessible exhibition for all ages. Tickets are $15 for GA (available online) and the museum is open 6 to 10 p.m. Fridays and noon to 6 p.m. Saturdays and Sundays.

Skate around Mount Rushmore ... in Dallas.
courtesy Galleria Dallas
Mount Rushmore on Ice at the Galleria
This is really strange. Like, odd even for Dallas. Even for a Dallas mall. The Galleria Dallas (13350 Dallas Parkway) is exhibiting a scale model of Mount Rushmore on its ice skating rink in honor of Presidents Day. So, yes, you can skate around the fairly controversial South Dakota landmark and under an American flag that’s more than 600 square feet while in a Texas mall Saturday through Monday’s holiday. And that would be odd enough for us. But there’s more. Specifically, bobble-headed presidential mascots. Pretty sure you can guess which ones, but they’ll be there with South Dakota educational squads to give families the 4-1-1 about the mount and more in South Dakota. They’ll be giving away prizes, but we’ll give them tremendous props if they talk about the Lakota’s Six Grandfathers Mountain before it was carved. Visit Galleria Dallas online. Ludwig Schwarz, Untitled (X2115), 2021 19x15in
Ludwig Schwarz
Ludwig Schwarz and Ari Brielle at the Conduit Gallery
The Conduit once again opens two strong exhibitions in tandem that create quite the conversation between gallery rooms. In the main area, Dallas-based Ludwig Schwarz plays with boundaries and asks the viewer to chew on possibility, scale and absence. In the Project Room, Ari Brielle, another Dallas artist, takes on politicization of the Black American femme experience by way of a site-specific installation that is as vast as it is intimate. An opening reception is 5 to 7 p.m. Saturday, Feb. 19, but the exhibitions are on display through April 2. For more, visit the Conduit online.

The Marauders looks at life in communities on the U.S.-Mexico frontier, places flooded by border militias and conspiracy theories in recent years, and examines the way those groups have at times carried out vigilante violence while targeting residents, humanitarians and migrants. It may be a sobering subject, but there will be able to purchase alcoholic beverages. It starts at 6.30 p.m Tuesday, Feb. 22, at 3000 Commerce St.
KEEP THE DALLAS OBSERVER FREE... Since we started the Dallas Observer, it has been defined as the free, independent voice of Dallas, and we'd like to keep it that way. With local media under siege, it's more important than ever for us to rally support behind funding our local journalism. You can help by participating in our "I Support" program, allowing us to keep offering readers access to our incisive coverage of local news, food and culture with no paywalls.
Make a one-time donation today for as little as $1.
Merritt Martin
Contact: Merritt Martin