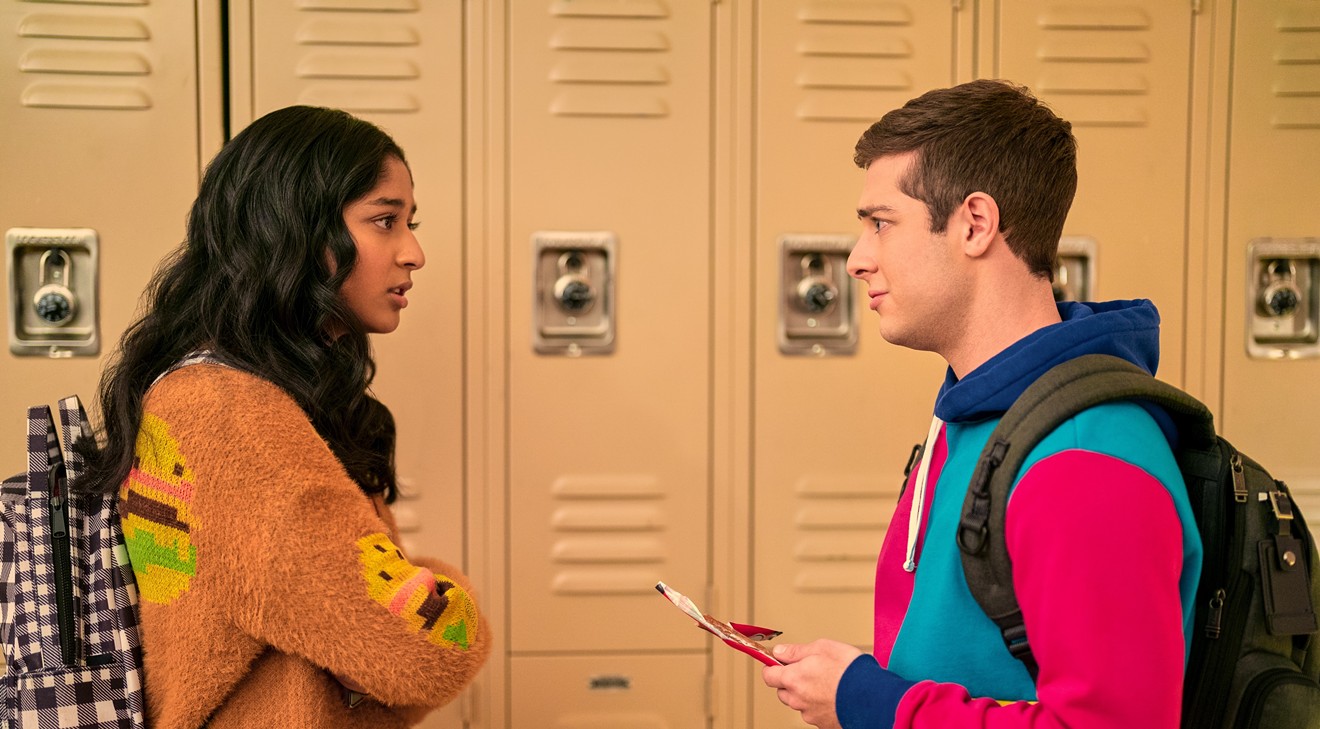 Dallas actor Jaren Lewinson (right) stars with Maitreyi Ramakrishnan in the Netflix high school comedy Never Have I Ever. Lara Solanki/Netflix
When Jaren Lewison landed the role of Ben Gross on Netflix’s Never Have I Ever, he had just graduated from J.J. Pearce High School in Richardson. He was ready to study at the University of Southern California and to pursue his dream of acting in Los Angeles. Now, Lewison, 21, is freshly graduated from USC and finds that he is growing up alongside Ben. In the third season of Never Have I Ever, which premieres Friday, Aug. 12, Ben is preparing for life after high school as he deals with the testing and application process to get into college.

Lewison’s love of acting began at the age of 5, when he was a student at the Levine Academy in Dallas. One day, while he was at the academy’s after-school program, an improv group came and performed for him and his classmates.

“Anytime they would ask for volunteers, my hand would shoot straight up,” Lewison recalls, “and I’d be like ‘Me me me me me!’ And afterward, my mom came to pick me up and they were like, ‘Hey, we think your son has a natural talent for this. He's really excited about it, and we think you should call this number’ and it was a number to a local film and TV agent.”

Lewison would later sign to the agency and appear on shows such as Barney & Friends and Lone Star.

Lewison is equally as passionate about sports as he is about acting. Some of his fondest memories of growing up in Dallas include going to Cowboys and Stars games. They also include food. He recalls happily walking off to Whataburger after school, to a location that was within walking distance of J.J. Pearce.

But perhaps the most life-changing memory came to him shortly after graduating from Pearce, during a trip to Lincoln, Nebraska, with his theater classmates.

“I was at the International Thespian Festival, which was is big theater festival where Pearce was doing Shakespeare in Love,” Lewison says. “It was a pilot premiere produced by Disney, and my school was chosen to do it, and chosen to go to Nationals.”

It was then that Lewison got the call that he had booked the role of Ben on Never Have I Ever.

“I was sitting with Heather Biddle, who is the theater director at Pearce, along with some of my closest friends and classmates," he says. "Everyone dog-piled on me. It was really special, and it was an incredible moment to be surrounded by them and supported by them throughout.”

Over the past three years, Lewison has grown up with his ambitious, well-mannered character, and in the latest season of the comedy by co-creator Mindy Kaling, Lewison says Ben still has some growing up to do.

Without giving too much away, Lewison promises the new season will see the characters explore “complex” situations in regard to “growth and identity.” At the end of season 2, Ben sees his crush, Devi (Maitreyi Ramakrishnan) kiss Paxton (Darren Barnet) at the school dance. Ben then says, “It was always him, wasn’t it?’ which then prompts Devi’s friend Eleanor (Ramona Young) to tell Ben that Devi originally wanted to pick him. THE. DRAMA.

"Everyone dog-piled on me. It was really special, and it was an incredible moment to be surrounded by them and supported by them throughout.” – Jaren Lewison, on earning the role of Ben on a Netflix comedy


This love triangle, as well as life after high school, will be explored this season. Lewison says he can relate to the show's storylines even three years after he graduated from high school.

“I know that for me, applying to USC, where I just recently graduated from, was really stressful,” Lewison says. “Every single day, I was checking my mail, hoping that that acceptance packet would come. Ben and I harbor these incredible dreams, and we worked so hard our entire lives to do well in school and to set ourselves up for the future. But I think that this season shows us that that bumpy ride is something to learn from.”

Fans of Never Have I Ever can rest assured that they still have plenty of time left with their favorite characters. Although the third season premieres this week, our conversation with Lewison took place a day after the show wrapped production on its fourth and final season, which will likely premiere next year.

Lewison’s time on set may be over, but Ben is someone Lewison will live with forever.

“I think both Ben and I need to remind ourselves that we're both still really young,” Lewison says. “And we can explore all sorts of different aspects of our interests and be able to allow ourselves to learn, grow and, come into our own.”
KEEP THE DALLAS OBSERVER FREE... Since we started the Dallas Observer, it has been defined as the free, independent voice of Dallas, and we'd like to keep it that way. With local media under siege, it's more important than ever for us to rally support behind funding our local journalism. You can help by participating in our "I Support" program, allowing us to keep offering readers access to our incisive coverage of local news, food and culture with no paywalls.
Make a one-time donation today for as little as $1.