Kill Tony's Jeremiah Watkins on the Audience Every Comedian Dreads 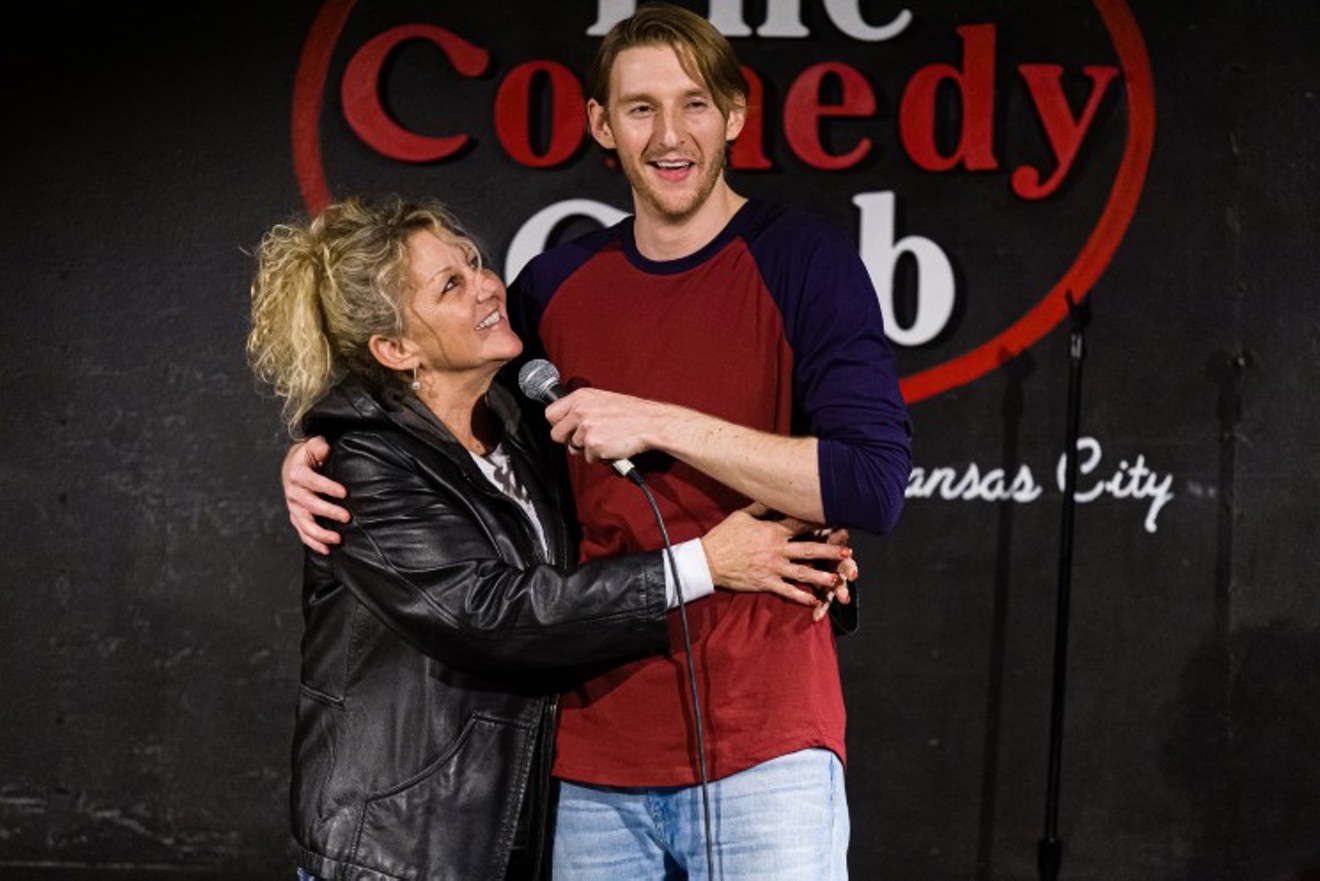 Jeremiah Watkins gives his mom a hug on stage during a recording of his show at The Comedy Club in Kansas City, Missouri, that will be the basis for his next comedy special, Family Reunion. Josh Chaikin
Comedians may be fearless enough to get on stage and perform, but steel nerves and supernatural bravery don't help when facing a particular kind of audience.

We're not talking about talent scouts from major cable networks who sum up entire careers based on two minutes of material nor about mobs of boozed-up bikers who don't have the patience for a multilayered takedown of tort reform — not even about an audience of Carlos Mencia clones short on new material. Nope, what comics most dread is performing in front of their families.

Comedian Jeremiah Watkins had to face his fear last year during a show at The Comedy Club in Kansas City, Missouri, when the club's staff seated his immediate family in the theater, something he didn't know until he went on stage.

"I didn't plan it because I wouldn't plan something like this out," Watkins says. "They sat my family in the room. Basically, I walked into the room and there is my dad and his new wife and to the left is my mom and her new husband and my brothers are in the middle of the room. I'm surrounded by my family."

Other kids in less public professions would be eager to let their parents watch them do those things they've dedicated their time to perfecting. For comedians like Watkins — who's also the bandleader and saxophone player on the popular comedy podcast Kill Tony and the host of the inquisitive Jeremiah Wonders podcast — it's especially awkward as part of his job involves making fun of his parents and siblings. Watkins plowed through and did the show anyway, and it became such a special and funny performance that he turned into his next comedy special, Family Reunion, which will be released on iTunes, Amazon Digital and other on-demand streaming services.

The comedian is also going on the road and performing shows again after a long pandemic break, including six shows Thursday through Sunday at the Addison Improv.

"I walked out surrounded by family and friends from my past, and it ended up forcing me to feed off that and work off that," Watkins says. "It ended up being a part of that show."

Watkins' Kansas City showing had a heckler in the crowd. It was his mom.


"I actually brought her up on the stage, and it's one of my favorite moments of the special and another reason why I wanted the special to happen if it was shot," he says. "I don't know if it will happen again in my lifetime where I have family at a show like that."

Watkins is more than adept at thinking on his feet and tuning into the frequency of the room to guide his material. It's something he says he's missed since the coronavirus outbreak forced him and so many other comedians to put their live show schedules on hold and make the move to online stages.

"It's been challenging but rewarding in a different way," Watkins says. "With the podcasts I've been doing ... because everybody is on the same page doing things virtually, I've been able to contact more with friends out of town who are comedians. It's connected me with different comedy communities in a different way where before you'd have to wait until you went to that city."

It's also changed the dynamic of Kill Tony, a late night-style podcast where comedians brutally comment and roast on 60 seconds of material performed by randomly chosen volunteer comedians — which runs like a booze fueled Gong Show with no FCC regulations. The shows are usually recorded in front of live audiences every week on the road and at The Comedy Store in Los Angeles but, thanks to COVID, he and the show's host Tony Hinchcliffe (who, by the way, will be in town in November) have also had to improvise.

"I think it forces us to be creative in different ways," Watkins says. "It's definitely a challenge, but we're making the most out of the situation given to us and stay as positive as we can. The only other way around is not doing the show, and we don't want to do that."

Watkins seems to relish taking new twists in strange settings with his comedy, whether he's performing in front of his own flesh and blood or a half-filled room of people who've been through a historic pandemic.

"It's through a slightly different lens," he says. "I think that it changes how you get into certain jokes. I've seen my wife more than ever because I was a touring comedian, so that changes the point of view of certain jokes and some of the newer stuff I'm working on stage. ... I'm all about trying to give people a mental vacation from their problems for the duration of the show."