Fort Worth Magazine Inc. and Fort Worth Magazine publisher Hal Brown thinks a reader calling for diverse coverage is a "killjoy." Dan Formsma/ Wikimedia Commons
On Feb. 19, a Fort Worth artist named Choke made a post calling out Fort Worth Magazine for its lack of diversity. At first, the artist says she simply meant to share a photo of the issue's cover, as her friend had worked on its art, but she took issue with the content within the magazine, which she found to be a bit ... monochromatic.

"When I look through the 'Faces of Fort Worth' section I am appalled by the blatant whiteness," she wrote.

In the same post, Choke included an update stating that the magazine's editor, Brian Kendall, had sent her a direct message, where he said the following, according to Choke:  “I want to make clear that the section you take issue with is not meant to be reflective of Fort Worth, its amazing entrepreneurs, or those who live in the city. It was an advertising section, and I hope you can correct that on your post, as I don't want people to walk away with the wrong impression about the editorial of our magazine. Of which I am extremely proud of.”

Choke included the editor's response in her post, she says, but expressed her disapproval with the advertorial section's name, "Faces of Fort Worth."

"My rebuttal to this is: if this is true, then why does this 'paid advertisement' section have such a problematic and misleading title?" she wrote. "If this section doesn’t truly reflect Fort Worth, then who does it reflect and why does it have this title? Marketing plants seeds and it's obvious the fruit these seeds produce."

Choke says she met up with Kendall as well as a councilwoman for a discussion, and asked him who the magazine's "target market was," and told him she saw a lack of representation in the magazine's pages, which she found particularly problematic in a publication whose slogan is "The City's Magazine."

Choke also said she was satisfied with Kendall's response when she brought up her concerns.

"It was explained to me that it's for ALL the folks who make up Fort Worth. With that, I left the meeting with some hope!" she wrote in a second post on March 16.

But, as Choke explained, she soon discovered that the meeting hadn't sat well with Kendall's publisher, Hal Brown, whom she never met or spoke with, but who used her concerns as the subject of his editorial this month, under the "Publisher's Letter" section in the magazine's sister publication Fort Worth Inc. And Brown's take goes from unorthodox and non-diplomatic, to tone-deaf.

Brown goes on to describe Choke's post, and the fact that Kendall had responded to her letting her know that despite its name, the section was for paid advertisement. "Ms. Killjoy replied by complaining that the section's name had a 'problematic and misleading title'. It is clear that Ms. Killjoy is not satisfied with our coverage of people of color," Hall wrote. "As founder and editor-in-chief of all our publications, I determined our reader target market before launching the titles, and I learned a long time ago that you can't be all things to all people."

And what is that target market that doesn't include people of color, according to Brown?

"Our Fort Worth Magazine target market is affluent readers with average household incomes of $273,000, college-educated, 35- to 54-year-old, married Fort Worth homeowners," Brown wrote, before using a similar description for Fort Worth Inc.

As Brown explained it, it's simply not his fault that people of color don't fit that bill. As he also insists, the publication's readership includes "doctors, lawyers, business owners, corporate executives, tech professionals, successful people and the likes."

"The above demographic does not address race," he continued. "The racial composition of Fort Worth is 64% white and 36% black, African American, other. There are many non-white readers who fit our above-affluent target market. And to the degree that they do, we will cover them." 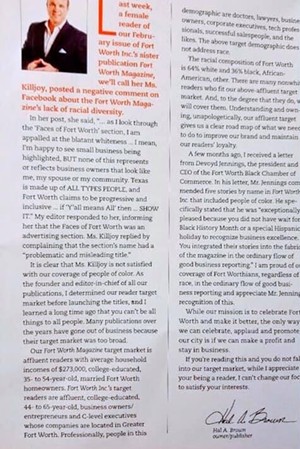 A photo of the March editorial in Fort Worth Inc. by Hal Brown.
Choke

After making the case that the magazine is classist, not racist, and citing the approval that he received from the CEO of the Fort Worth Black Chamber of Commerce for previous coverage, Brown signed off with a message to his less affluent, non-doctor, non-corporate executive, non-household income members of $273,000 on average: "If you're reading this and you do not fall into our target market, while I appreciate you being a reader, I can't change our focus to satisfy your interests."

Kendall still has a different message than the publications' owner.

"We are not an exclusive publication," he tells the Observer in an email.  "We are the city's magazine, and our editorial team's sole charge is to tell the stories those in our wonderful city have to share, regardless of race, color, or creed."

"I own a business here and it's bad enough this guy Hal used his power for not good when I simply had an observation and called his publication out and asked for inclusivity," Choke tells the Observer, adding that it's not just the "Faces of Fort Worth" section that fails to be inclusive. She points to a recent article, published August of last year, called: "Defining Culture: We asked a handful of prominent Fort Worthians to define the city's culture..." where the only prominent Fort Worthians asked to define the culture were a group of nine people who appear to be white.

In an email, Brown says that he's aware of the Facebook posts and comments that followed his Publisher's note. "Many of the comments posted had to do with my using the moniker Killjoy," he writes. "In hindsight, I regret using that reference as many have commented that they felt it was condescending. My objective was not to be condescending, but to express my frustration while keeping her anonyms. (sic)"

Brown says his writing was in response to Choke's complaints about the "Faces of Fort Worth" section.

"My frustration was how she responded after my editor pointed out to her that the section she was referring to was an advertising section, and that he hoped she’d correct that on her post, as he is very proud of our editorial and he did not want people to walk away with the wrong impression about our magazine," he writes.

Brown denies that his publications lack a diverse representation.

"I believe our editorial coverage speaks to the fact that we are inclusive. Fort Worth Magazine and Fort Worth Inc. have extensively reported on heavily-minority areas of the city, and the people working in them," he says. He enumerates examples that he says show a broader coverage in writing and photography.

"One can have an affluent target market and not be a classist, or a racist," he writes. "This is not a race issue or a class issue, it’s a marketing issue."

Choke had an opportunity to correct her statement, but instead decided to criticize us for the advertising section having a “problematic and misleading title.” So, while I regret using the term Killjoy, any suggestion that we are not inclusive or diverse in our editorial coverage is patently false.

Choke's posts are beginning to make the rounds on social media; she's included the publisher's email and is asking her Facebook friends to "flood his inbox with messages of disapproval," signing the post with her new moniker, "#killjoy."

We have updated this story with comments from Kendall and Brown.
KEEP THE DALLAS OBSERVER FREE... Since we started the Dallas Observer, it has been defined as the free, independent voice of Dallas, and we'd like to keep it that way. With local media under siege, it's more important than ever for us to rally support behind funding our local journalism. You can help by participating in our "I Support" program, allowing us to keep offering readers access to our incisive coverage of local news, food and culture with no paywalls.
Make a one-time donation today for as little as $1.