Multi-hyphenate artist Jeremy Biggers was inspired by his daughter Tesla for his mural "Dream." Jason Janik
The holidays are upon us, and with them comes an influx of family and friends traveling to our fair city. When the football games are over, and the malls are too crowded, why not take your crew on a tour of the latest and greatest murals around town?

Dallas has long been an enclave for this impactful yet temporary art form. One of the earliest street artists — pop surrealist Ron English — started tagging abandoned billboards over a freeway overpass. And what was once a secretive, illegal practice is now welcomed by businesses that offer up walls from the Design District to Deep Ellum, the Tin District to the East Quarter.

In past years, organizations such as Wild West Mural Fest have lent space to established painters and brand-new talent. The theme of this fall’s fest was "Celebrating Art Out West,” with 12 new walls serving up an “Old West” vibe, according to festival organizer and muralist Will Heron.

And Heron is thrilled to see the recent work of superstars like Ron English and Shepard Fairey popping up on local walls alongside the up-and-comers of the Wild West Mural Fest.

“I’m a proponent of supporting the local scene, which is why I do the mural festival,” Heron says. “But I’m also a proponent of bringing some of these bigwigs to our city. I think it’s super cool we don’t have to go to Miami or New York to see Ron English’s work. Shepard Fairey inspired me a decade ago even to question what public art and street art are. It’s only going to get more young students inspired to ask questions and want to know more about what it means to be a street artist.”

Use this guide to take your gang to see the best on view (and capture them for the ‘Gram) before they disappear. A

Jeremy Biggers, “Dream”
3005 Commerce St.
Muralist and fine artist Jeremy Biggers’ career has exploded recently, with walls commissioned everywhere from Houston to Washington, D.C. In the latter city, a piece representing his 4-year-old daughter Tesla was painted over for no real reason in the space of a day. When Biggers sent out an open call to create more murals in his hometown, Gianna Madrini of the nonprofit Deep Ellum 100 answered, giving him a new home for an iteration of the D.C. mural — his little girl turned superhero.

“I wanted to represent people that grew up like me who didn’t really get to see art in public spaces,” he explains. “It’s that aspirational aspect of a kid who hasn’t lived long enough to be cynical, so they see themselves as heroes and believe in the mythos of superheroes. It’s a reminder to never give up your dreams and keep going.”
click to enlarge Multi-hyphenate artist Jeremy Biggers was inspired by his daughter Tesla for his mural.
Jeremy Biggers
Ron English, “Texas Tantrum Tot and Friends”
Good Latimer Expressway and Elm Street
One could argue that English invented the concept of street art in Dallas, so this vibrant Deep Ellum mural is a well-deserved homecoming for the legendary pop surrealist painter. The piece shows off only a few of English’s vast array of characters. The mural by pioneering pop artist Ron English shows a few of his favorite characters.
Ron English
Shepard Fairey, “While Supplies Last”
2200 Commerce St.
Shepard Fairey made his street art imprint on the Dallas scene more than a decade ago. Still, his latest mural, “While Supplies Last,” cements the East Quarter’s status as the city’s neighborhood du jour, as well as highlighting his passion for causes he cares about (in this case, the environment). Created in conjunction with his current Shepard Fairey: Backward Forward show at the Dallas Contemporary, “While Supplies Last” offers a minimal palette of red, teal, yellow and black. The stamp at the bottom of the work references the limited availability of natural plants, but it could also reference the short lifespan of public art. 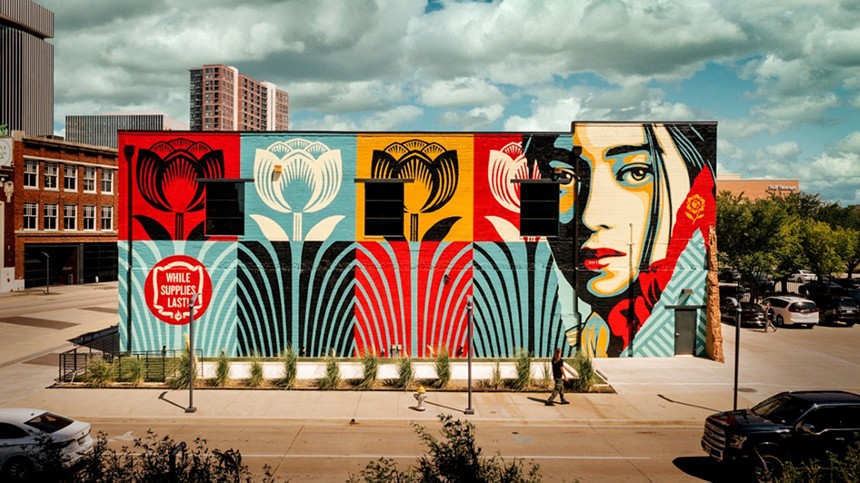 Famed street artist Shepard Fairey has had a few works in Dallas.
Joh Furlong/Courtesy of ObeyGiant.com
Will Heron (aka Wheron)
3203 McKinney Ave.
As an artist liaison for Meow Wolf, Heron was given a chance to create a black-and-white landscape as a present to the city from the arts organization (which will open in Grapevine next year).

“It’s actually a gift that Meow Wolf is giving to the city before they come here,” says Heron of the piece. “And it’s also playing off of my motifs of surrealist plant life. Ultimately, it’s a representation of growing up in Texas as a queer male and what that means. The muddy waters of Texas still allow a lot of queer people to bloom and grow.” Will Heron, an artist with an unmistakable style, was also the organizer of the mural project.
Will Heron
Raytrill Harvey, Anthony Chavez, Cat Rigdon
2720 Bataan St.
Newbie Wild West muralists Harvey, Chavez and Rigdon chose to adorn the doors on the old West Dallas Carpet building with imagery that expresses their aesthetics. In this case, a woman playing with flame, the iconic Dallas Pegasus and a Greek death pot vessel, respectively. Three Dallas artists have murals on the walls on Bataan Street.
Wild West Mural Fest
Macho My Dude (Christopher Mochorro), “Hotdog Rodeo”
Pyramid Guy (Kris Kanaly), “Wild West Galactic”
515 Singleton Blvd.
2-D artist Macho My Dude dropped his first-ever mural featuring Big Tex toying with a finger skateboard as part of the fest. Next to it is a rainbow mix of trippy iconography from Oklahoma artist Pyramid Guy from the Plaza Walls Crew, which operates an artistic exchange of sorts with Dallas muralists. Oklahoma's Pyramid Guy got wild with color.
Kris Kanaly
Eli Paek, “Unalienable Rights”
331 Singleton Blvd.
As Paek lives and works on a farm outside of Dallas, her painterly, impressionistic piece on an Art Park wall references what it means to be part of a small town and a big city simultaneously. The horses pictured represent “life, liberty, and the pursuit of happiness,” according to the artist. Wild horses could drag us away, actually. To Dallas' mural festival.
Will Heron
Oddgrass (Josh Snodgrass)
707 Fabrication St.
Asheville/Dallas-based artist Oddgrass created his biggest mural on the walls of his Tin District studio for Wild West. This striking piece lets the viewer know there's something arty happening inside and out, and it features some of his favorite elements such as eyeballs, roses, cowboy hats and skulls. 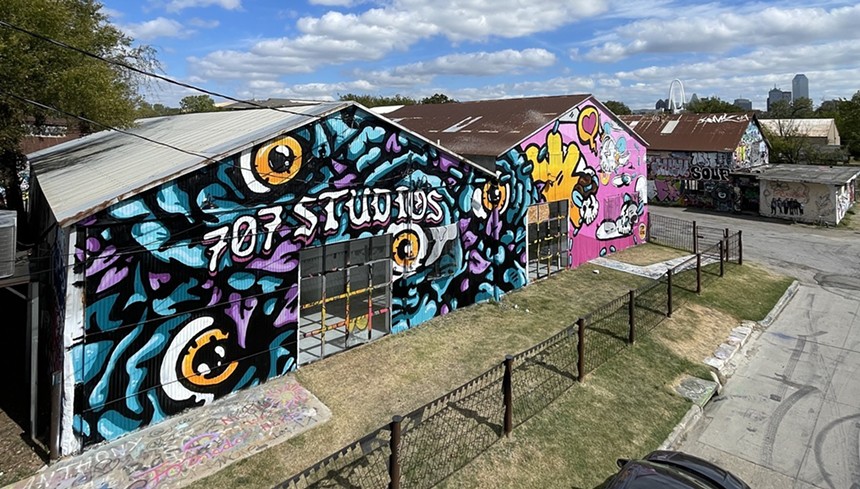 Josh Snodgrass
KEEP THE DALLAS OBSERVER FREE... Since we started the Dallas Observer, it has been defined as the free, independent voice of Dallas, and we'd like to keep it that way. With local media under siege, it's more important than ever for us to rally support behind funding our local journalism. You can help by participating in our "I Support" program, allowing us to keep offering readers access to our incisive coverage of local news, food and culture with no paywalls.
Make a one-time donation today for as little as $1.