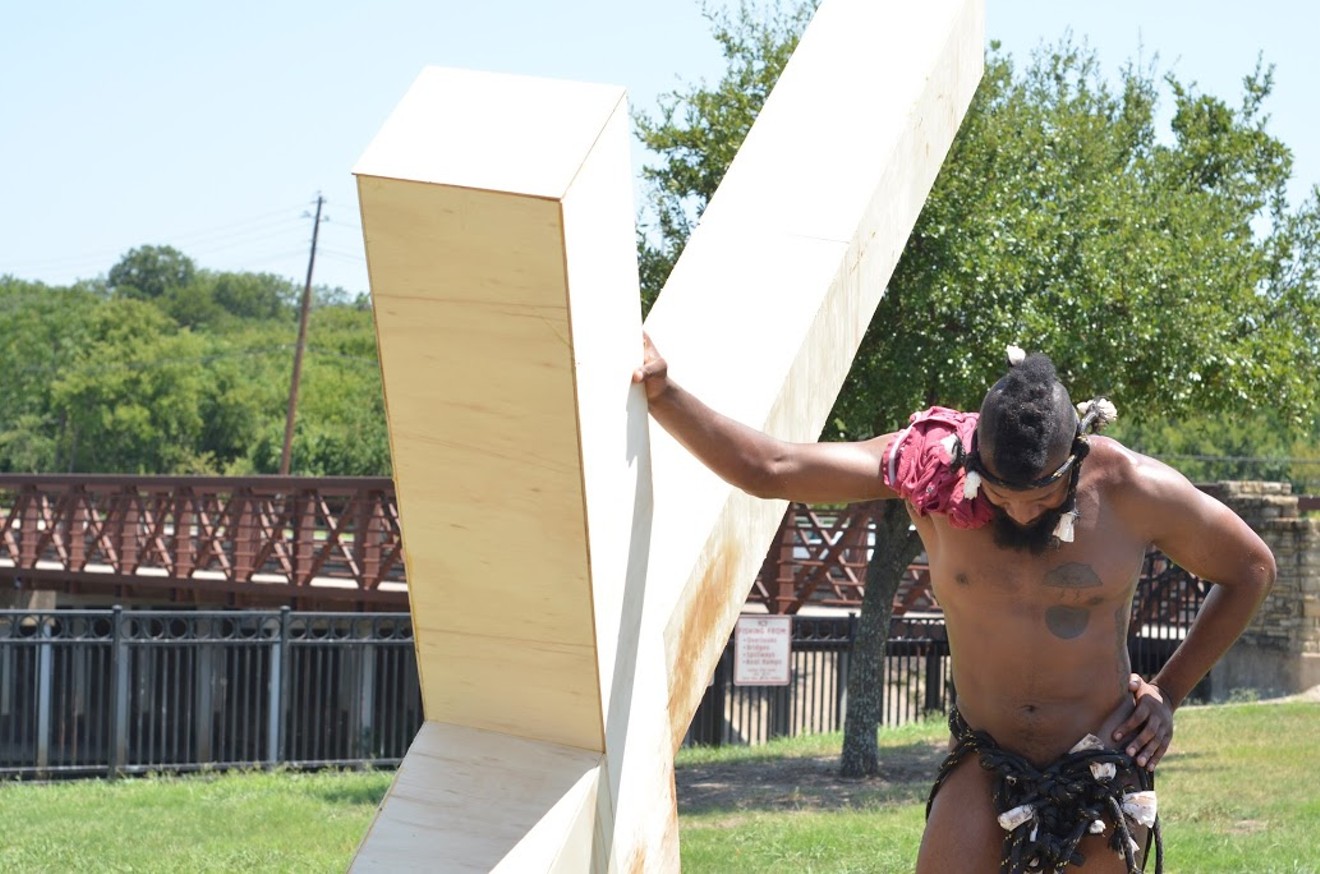 
Barefoot, nearly naked, sweating and seemingly disoriented, local artist Xxavier Carter carried a heavy weight on his shoulder during his Saturday performance of "Sweet Jesus." He walked 10 miles from The Great Trinity Forest to White Rock Lake wielding a wooden cross almost twice his size. The performance was a re-creation of his 2012 work "Jazz, Jesus, Jazz," which took place in San Francisco.

His 10-mile venture in Dallas crossed through neighborhoods of varying economic classes and religious boundaries. This project was meant to highlight the relationship of blackness to the Christian faith.

The only bits of clothing he wore were around his head and his waist. It was all made out of rope. As he walked, sweat dripped down his body. Leaves of low-hanging trees brushed against the wooden cross as Carter passed underneath them.

Every step he took was met with searing-hot concrete. At times he would quickly set down the cross and rush to the nearest patch of grass he could find to cool off his feet. Other times, he just pushed through the pain.

The rope he wore and the wooded areas he walked through are references to a history of lynching black people in the United States, he says.

Throughout the performance, people followed behind him. Some were on foot, some were in their vehicles and others were in police cars.

“There were so many cops that I lost count,” Carter says. “I didn’t stop until a cop car pulled in front of me and the police officer got out. I told him about the project, and he was like, ‘Oh, cool. We were just seeing if you needed any help. Do you want some water or anything?’” 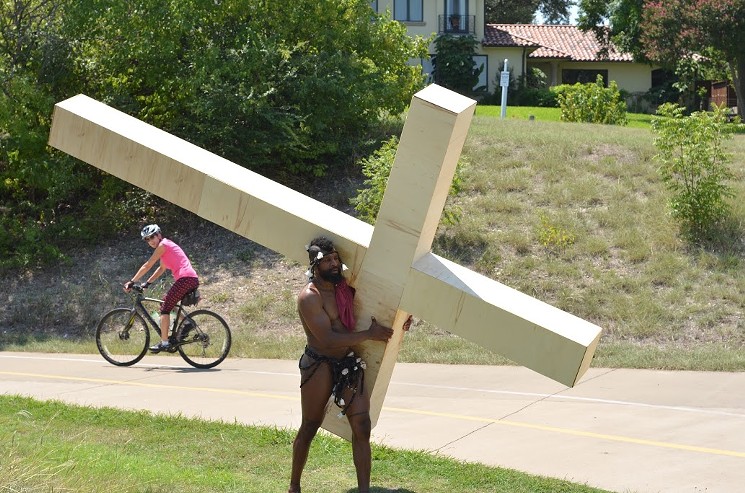 Although it was a more amicable response from the police than Carter had anticipated, most of the interactions he had throughout his performance were, more or less, lighthearted.

“Everyone was really respectful, actually,” Ashley Jones, a follower of Carter, says. “There were plenty of traffic jams and plenty of slowdowns, and people were kind of fine about it. Most people wanted to see him.”

There were only two notable occasions when people seemed to not take kindly to Carter's performance.

The first was when a teenage boy stuck his head out of the window of a moving car to call Carter a fag. The other involved a cyclist slowing down to ask why the cross was being carried upside down. This was not supposed to be a sacrilegious metaphor. It was simply the easiest way to carry the cross.

One woman says she began following Carter after seeing a near collision result from cars trying to get around him. She got behind him, turned on her hazard lights and stuck with him nearly the whole way.

Those following him on foot were friends and fans of his work. During the walk, they would periodically supply him with water, wet the hot ground beneath him and document his project. Bradley Kanter, a longtime friend of Carter, asked how he prepared for this. Carter joked that he practiced with an eight-foot cross on his treadmill at home.

“He used to be a tailback for Stanford behind Andrew Luck, so he definitely has the athleticism and willpower to do the physical exertion that is needed for this,” Kanter says. “Mentally, he’s just always been there as well.”

As they approached White Rock Lake, his followers began filling up bottles with water from the lake to pour over Carter's back. One called a friend to make sure a first aid kit would be waiting for Carter once he arrived.

Around this time, he revealed his intentions to burn the cross once he reached his final destination. He says it is a direct representation of the messed up things people have done to crosses in the guise of intimidation. When asked if he had permission to do so, he would not give a straight answer. 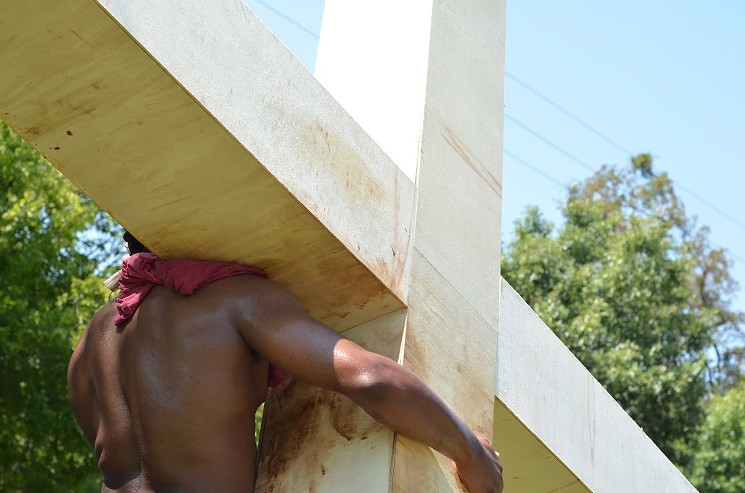 When he and his followers finally arrived, Carter proceeded to stake up the cross. He filled buckets with lake water to wet the area surrounding it. He then pulled out a container of charcoal lighter fluid and began dousing the cross.

Everyone there expected the police to show up but continued to watch as Carter lit the cross. The charcoal starter burned quickly, leaving the cross completely intact. He made two attempts at this with no luck. It was a sign, Carter says.

Although everything did not go as planned, he says the reception was so much better than he had imagined. With fewer people around him, this performance was much more intimate than the one in San Francisco six years ago.

As his friends wore rubber gloves and applied burn cream to his feet, Carter said he plans to do a performance similar to this somewhere else sometime next year.
KEEP THE DALLAS OBSERVER FREE... Since we started the Dallas Observer, it has been defined as the free, independent voice of Dallas, and we'd like to keep it that way. With local media under siege, it's more important than ever for us to rally support behind funding our local journalism. You can help by participating in our "I Support" program, allowing us to keep offering readers access to our incisive coverage of local news, food and culture with no paywalls.
Make a one-time donation today for as little as $1.