Baroness’ John Baizley Says 'Fuck Reality' Because It's 'a Drag' 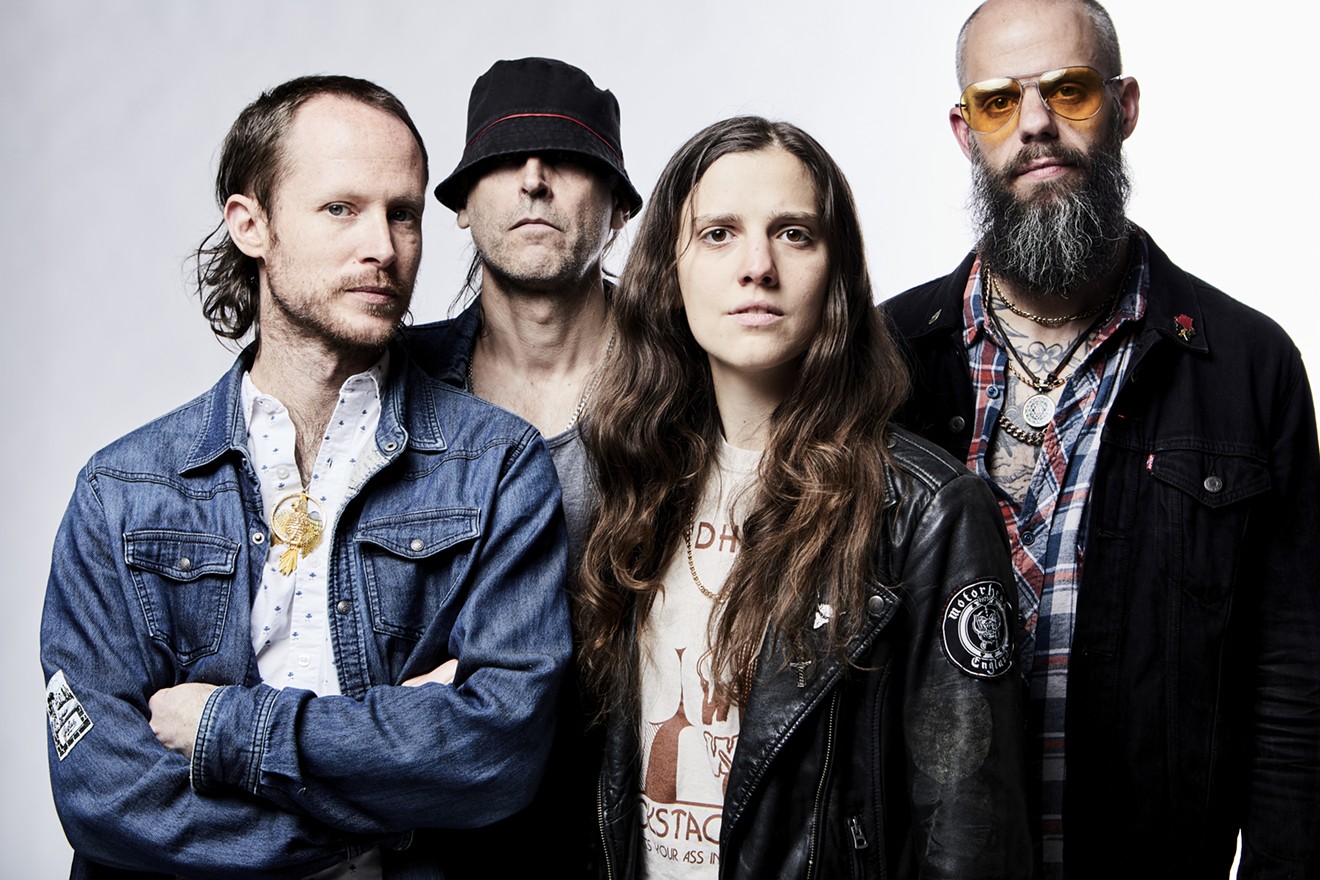 Metal band Baroness is treating Dallas fans to a customized setlist this week. courtesy Baroness
Baroness is, unquestionably, one of the 21st century’s most celebrated and dynamic "metal" bands.

Scheduled to return to Dallas on Wednesday, April 6, at Trees (moved from Three Links), on their latest tour supporting the recent LP Gold & Grey, Baroness favored a unique concert experience: a nearly three-hour show with three uninterrupted sets. The first is composed of a fan-voted selection of songs,
the second is an acoustic sent performed by the band’s frontman/guitarist John Baizley along with lead guitarist Gina Gleason, and the third comprises other songs chosen by the band for a looser, more improvisational feel.

Baizley says that preparing for the fans’ potential requests required the band to relearn practically their entire back catalog.

“With this lineup, it’s more a matter of straight-up learning the songs,” he says, referring to the fact that the band has undergone a near-complete lineup change since its inception, with Baizley being the only constant member. “I should preface by saying it’s always been obligatory for us to have a fairly comprehensive understanding of our back catalog. I think that it’s important for Baroness to play diverse shows with a variety of songs from all eras of our existence."

The band took a retrospective dive through their past body of work.

"In preparing for this tour, we started with the songs we used to play frequently but haven’t as much recently and started by learning those, sort of working in a more granular, microscopic way back to songs we thought might get voted for," Baizley says. " I think we ended having full comprehension of over 60 or 70 songs.”

After Baroness handed off a carte blanche to fans, some handicaps came with that freedom.

“The long and short of it is, even though people are voting for 10 songs out of probably 15 total that get voted for, those are songs we would have been playing anyway,” Baizley says. “They’re songs that are always in the setlist. Even though the collection of fans, when they vote basically for the same songs every night, we have had to learn all these other songs and that has given us a cool breath of fresh air in our sails. It’s quite an undertaking both physically and musically, but for our audience, we’re trying to make it worthwhile."

Baizley says this system allows them to keep their sets dynamic and "vastly different" each night.

"In other words, regardless of what your favorite record is as a Baroness fan, you’re going to see that record played,” he says.

Does this mean that certain cities prefer certain records? Do the fans in Buffalo prefer the Blue Record while DFW is bound to lean towards the Red Album?

To a degree,” Baizley says. “I think based on where you’re booking shows on this tour, it’s obvious that the top Spotify playlist and top YouTube plays has a direct correlation on the things that get voted for. But I’ve noticed that in cities where we’ve spent a lot of time in our early days, the earlier records get a much higher vote count than the cities that we’ve played more recently for our more recent records.”

Baizley says the ironic advantage of that is that the band has no clear-cut favorite among fans or best-seller al a Metallica’s Black Album, making the mercurial set that much more rewarding for fans and for themselves.

“We really love the challenge,” he says. “It is kind of interesting to see market-by-market, city-by-city where people's heads are at. There are nights where I step on stage and I know immediately the crowd wants a very driving, very forward, very up-and-loud kind of show. There are other nights where I can just sense right from the get-go that they want something with a little more cinematic scope, the ballads or the more melodic stuff."

"We always have a very clear idea about what we want, but what we want isn’t the end goal. What I want going into a studio is a mindset, philosophy ... call it what you want." –John Baizley


Like their more cerebral or oblique metallic contemporaries in Mastodon, Deafheaven or Ghost, Baroness have prided themselves on their non-adherence to the metal formula, incorporating sounds of psychedelia, progressive rock, space rock, folk rock, post-rock and a whole other mess of stylistic turns guaranteed to have Mayhem fans clenching their fists. This freedom creates a color palette that changes within records rather than between them. Baizley attributes this partially to the pair of producers who have helmed the band’s last four records: North Texas’ own John Congleton, who was behind the boards for Blue and Yellow & Green, and Dave Fridmann, who took the reins for Purple and Gold & Grey.

“These guys are just like mad scientists, engineering geniuses,” Baizley says. "But also, they each have this sort of magical, mystical wizardry that they can apply to records. We always have a very clear idea about what we want, but what we want isn’t the end goal. What I want going into a studio is a mindset, philosophy ... call it what you want.

"It’s kind of hard to define it without [being] superfluous or overly poetic, but we wanted the creative environment. What you want is to enjoy the act of making [music]. What you want is to be thrilled as frequently as possible with every turn of the dial. You want to find something new inside our music that you didn’t know was there.”

Baizley warns against the preconceived notion of "intent" when going in to make a record.

“I think any studio-savvy musician/engineer/producer is going to agree that the more you try to wrangle something into a specific target, the less likely you are to hit that musically,” he says. “Once you start veering from your perceived path, you get frustrated, and that frustration comes out musically. The more frustrated you are the less cohesive you can be. There are some bands who have the attitude of ‘Let’s make this a genuine thing, this is what we sound like on stage, this is what we should sound like on the record,’ and I’m like ‘Fuck that.’"

He also believes that reality, at least in the artistic process, is overrated.

"Why would we as creative beings want something to be real and grounded like that? Why wouldn’t we want it to be better than real?" he says. "Why wouldn’t we want to explore the depths of our musical personas in such a way that is totally fantastic and of of this world? That’s what gets me going. We’ll learn through that process how to be that in the real world. The idea of making records so it drives you to become a better performing act ... the two aren’t mutually exclusive. When you tour on your record, you learn how to play better, you learn how to perform better, you take that into the studio and you learn how to drive yourself forward and learn new techniques and new everything. It has to sound better than real. Reality is a drag. I’m serious. Fuck reality.”

The band’s next record, supposedly, is bound to arrive sooner than expected.

“I’ll say that it has begun,” Baizley says. “We have worked on it for quite a while at this point, and the three words that I’ll use to describe it are — and I’m very proud about this is because it’s a fantastic sounding record: do it yourself. It’s a DIY record in the purest sense of DIY records.”

Does this mean that the band will be self-producing the album? Baizley hints that this will be the case.

“We’ve produced our last four records in collaboration with outside producers, but this is a little different,” he says. “This is an entirely home-grown experiment that we are capable of only after decades in this game. We’re only capable of this because of our work with John Congleton and Dave Fridmann.”

“Nope,” he says.
KEEP THE DALLAS OBSERVER FREE... Since we started the Dallas Observer, it has been defined as the free, independent voice of Dallas, and we'd like to keep it that way. With local media under siege, it's more important than ever for us to rally support behind funding our local journalism. You can help by participating in our "I Support" program, allowing us to keep offering readers access to our incisive coverage of local news, food and culture with no paywalls.
Make a one-time donation today for as little as $1.