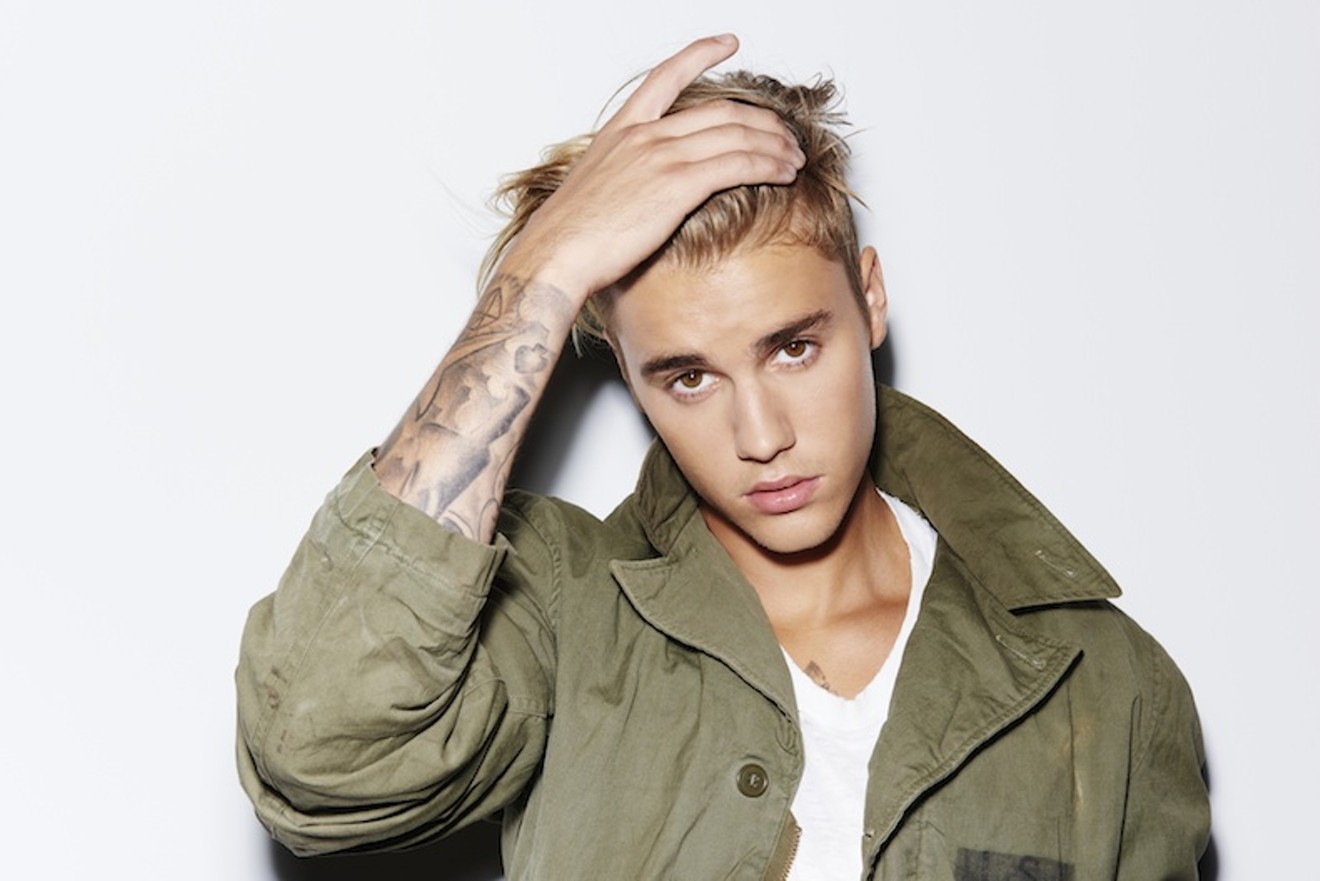 Justin Bieber is bringing Migos and Vic Mensa to Dallas for his second date of the Purpose tour on July 29. courtesy Def Jam
Earlier this week, 23-year-old pop star Justin Bieber announced new dates for his "Purpose" world tour, in support of his 2015 album of the same name. Topping the list is a visit to AT&T Stadium in just 10 days.

Bieber has visited Europe, Latin America,  Australia and New Zealand on the year-and-a-half-long tour, which has already stopped in Dallas once, on April 10, 2016.

If the announcement of the July 29 date seems overkill, consider that the No. 4 track on the album, "Sorry," is the most-viewed video on YouTube with 2.6 billion views. Bieber is also featured on two songs on Billboard's Hot 100 right now: Luis Fonsi and Daddy Yankee's "Despacito" and DJ Khaled's "I'm the One."

Not to mention that Dallas Observer contributor Jeff Gage, who reviewed the show in 2016 (where Bieber was incidentally supported by Dallas native Post Malone), said it was "easily the best concert production that's come through Dallas in the past 12 months, better even than Taylor Swift."

The press release announcing the new dates also revealed new openers Migos, Kehlani, Martin Garrix and Vic Mensa, all artists in the R&B, EDM and hip-hop genres Bieber has been closely linked to and influenced by in recent years.

"Justin Bieber is easily the best concert production that's come through Dallas in the past 12 months, better even than Taylor Swift." - Jeff Gage


Concertgoers to AT&T Stadium on the 29th will get the hip-hop side of things with Vic Mensa and "Bad and Boujee" performers Migos. Both are familiar to Dallas rap fans as they've been highlights of recent iterations of JMBLYA Fest.

"Migos came off more like rock stars at JMBLYA, where they had the strongest set and garnered the most intense crowd reactions off the day," Mikel Galicia wrote in his review of the 2017 fest in May.

Vic Mensa will have new music to perform as he's promoting his debut album, The Autobiography, which will be released the day before his show with Bieber, on July 28.

According to the press release, since the Purpose world tour launched in March 2016, Bieber has sold out 64 U.S. and 52 international tour dates. After Texas on the 29th, he'll head to California, Colorado, Minnesota, New Jersey, Massachusetts and Ontario and then on to Asia.

With no end to the tour in sight, it seems Bieber is out to prove he's the hardworking man of God he's been portraying to the press recently. In his late teens, Bieber dealt with numerous controversies pertaining to everything from the use of racial slurs to vandalism and comments about Anne Frank.

Around the time of Purpose's release in November 2015, Bieber went on an apology tour. That fall he told Complex magazine, "I just wanna honestly live like Jesus," and a few months later he was the subject of a Comedy Central roast.