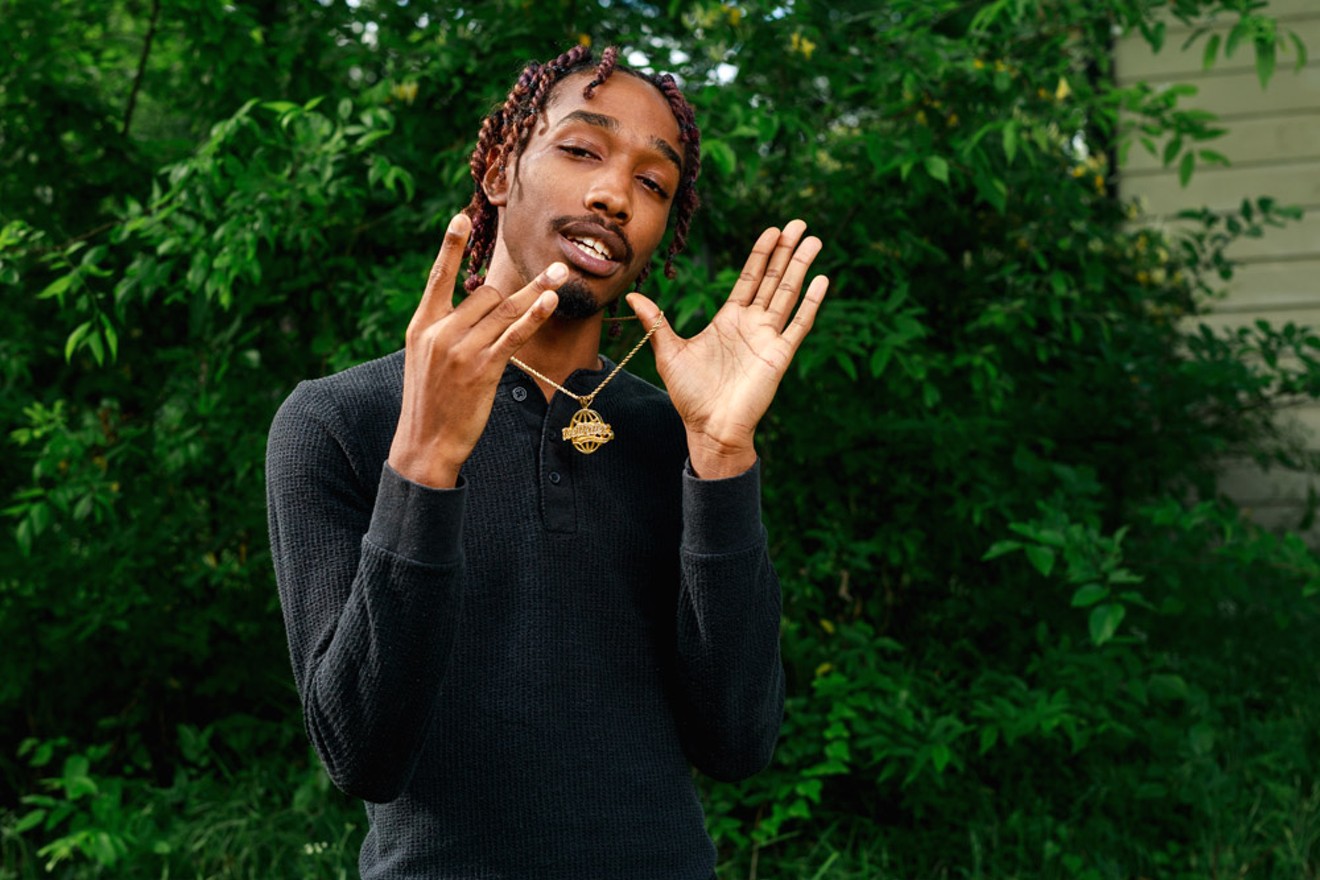 Oak Cliff native Diego Money shows off his Icewater Millionaires chain made for his Ice Water Division collective. Mikel Galicia
Dallas’ fragmented hip-hop scene forced Diego Money to be a nomad. In 2013, the then 17-year-old was making music that didn't sound like the other artists in Oak Cliff, and he had no interest in being part of Deep Ellum’s alternative hip-hop scene. He was making what he calls “young nigga music."

“It’s music for all the young people that want to be icey," says the rapper, born Roderick Dickerson. "It’s about chains, money, cars — y’know, that nice little lifestyle, but as a youngin'.”

Dickerson put his music on Soundcloud, following the lead of other breakout's like Chief Keef from Chicago and Migos from Atlanta. Like them, Diego Money went on to pioneer a new wave of music.

“Our scene is fucked up. Everybody acts like they’re on and not everybody is on,” Dickerson says of Dallas. “Then they hate. When we would throw a show they wouldn’t come out and support us, so I’m like, ‘OK, I know I can go somewhere else cause I know these people out here [are] fucking with me.’”

The music Dickerson was posting to social media was drawing attention from kids all across the country. He was able to see that most of his listeners were in Los Angeles, Houston and Atlanta, so he hit the road.

In Houston he worked out of the DSD1 studio, home of June James, who produced YFN Lucci’s No. 1 record Key To The Streets. Dickerson worked from sun down to sun up day after day, recording his music by himself and earning the respect of the studio's producers and engineers. That experience gave him the confidence to do the same thing in Atlanta.

“They respected me because they knew I was working,” Dickerson says. “I know I can connect with people so I go and do it. Everyone in Dallas is looking for a cosign but ain’t no cosigns in Dallas.”

Statements like Dickerson’s have been made by other Dallas rappers before. “If he could’ve stayed here I think he would have; I’ve seen him tweet about feeling some type of way about people here not giving him his due credit and don’t acknowledge him,” Mel Kyle of the Outfit, TX says. “Diego was forced to be nomadic because the infrastructure in the city is so shitty so he got to go where the love is.”


During his time between Houston and Atlanta his name was beginning to ring bells throughout the hip-hop scene. Dickerson’s brand of downtempo tracks coupled with his slow, southern drawl — evidenced on his 2014 mixtape Diego Nowitski — became so popular it started to spawn imitators such as Smokepurpp, Lil Pump and UnoTheActivist.

“There’s not a lot of artists coming out of Dallas, so when other artists hear our sound they take our shit because they act like nobody's going to know," Dickerson says. “Once I got the chance to come out and meet all the other people on Soundcloud, they all tell me, ‘I got my style from you; we was listening to you.’

Dickerson is adamant that popular rappers Playboi Carti and Lil Yachty, whom he worked with in Dallas years ago, borrowed from his style before they experienced the major success they have now.  "I’m not looking for nothing from nobody," he says. "But every time I drop a song, they want to call me Carti or say I sound like Carti, but I came out before them."

Dickerson's career has skyrocketed in the last few months thanks to collaborations with Famous Dex, who has his own huge following after working with Rich The Kid, Wiz Khalifa, Lli Yachty and Migos. Together they’re known as the Wave Bros and have caught the attention of Worldstarhiphop, who posted their video for “DexterDiego." At the time of writing, that video has over 750,000 views on YouTube. They recently even became roommates in Los Angeles.

Famous Dex is excited about the potential they have as a duo. “I knew his music but I didn’t even know him. I was always dancing to his music. He got a good vibe and energy and that motivates us to work,” he says. “I saw something in him like Rich The Kid saw something in me. We could change the whole new wave. We are the new wave now. We’re gonna make it happen.”

With Famous Dex in his corner, Dickerson has all the tools to be a breakout artist. Yesterday was his birthday; he celebrated by headlining his first show in California.