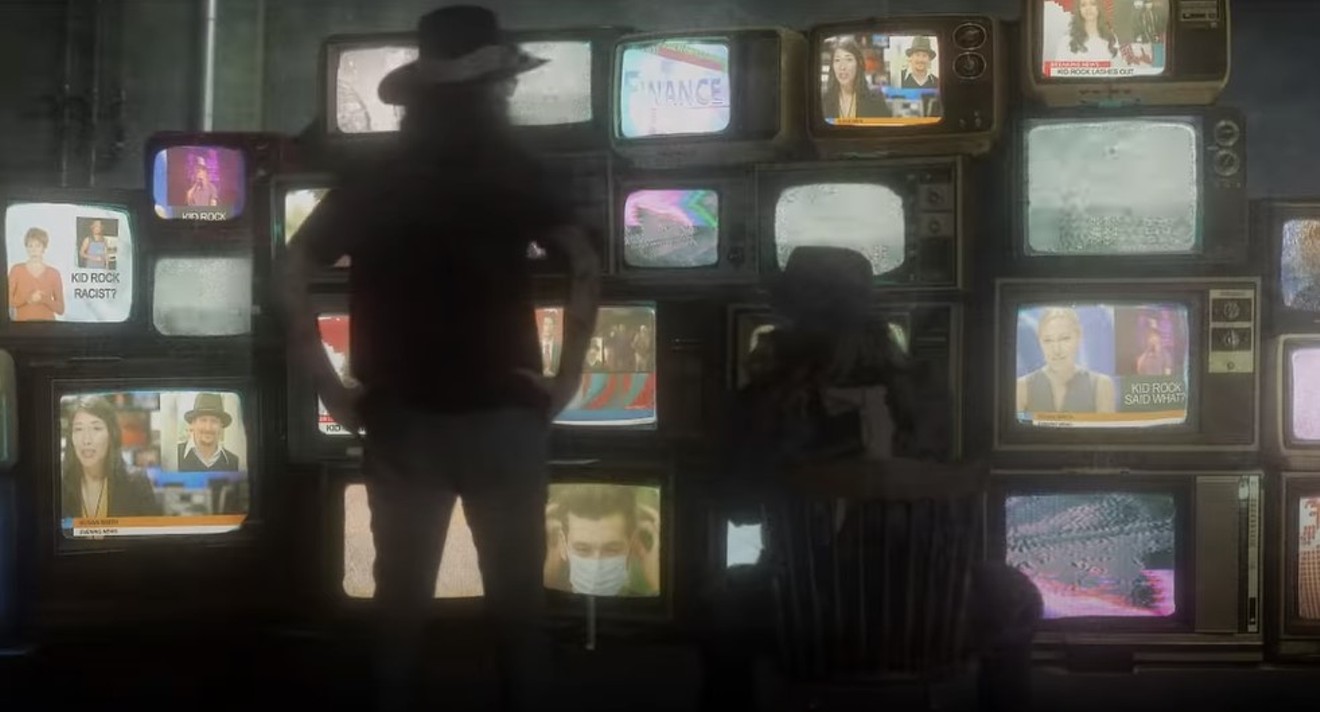 Kid Rock's video for his anti-vax song kicked off with a wall of screenings of phony news channels doing stories about how he's being a dick during the pandemic. So at least he's starting on an accurate note. screenshot from YouTube
Novelty songs have become just that: a novelty. Back in the '50s and '60s, music was full of weird tunes from one-off artists who occasionally found their way on the charts, such as Boris Pickett's "Monster Mash" and The Trashmen's "Surfin' Bird."

One-off goofy tunes rarely make it to the level of a "Purple People Eater" or "Kung-Fu Fighting" these days. If it wasn't for "Weird Al" Yankovic, The Lonely Island, Bo Burnham and a handful of other iconic comedy singers, the genre would wither away and die.

Ironically, the coronavirus brought the genre back to life in a way that no industry expert could have predicted. Thanks to pop musicians' egos taking the reins of their intellects, they are churning out a stream of protest songs against vaccination requirements, mask recommendations and lockdowns. And they are hilarious. It's like someone gave a crying child in the candy aisle of the supermarket a contract with Reprise Records and Vevo.

These folks think they're calling out the powerful by producing the next "My Brain is Hanging Upside Down" but they're really just making us laugh because they're the new "My Ding-a-Ling."

Don't take our word for it. Listen for yourself, and challenge yourself not to laugh — though this might build massive amounts of pressure in your eustachian tubes and shoot the back of your brains clear out of your ears.
1. Kid Rock's "Don't Tell Me How to Live"
Kid Rock wrote this song to make it 100 percent clear he could not give less of a fuck about spreading one of the deadliest modern viruses along to others, though he canceled a planned show in Fort Worth in August because, he said, "over half the band has fucking covid (not me)." Because that's how cowboys roll. Maybe you need to rethink your game plan when your spiritual role model once considered syphilis to be normal and dental hygiene to be fancy.

The video starts off with an image that looks as if adopted from Eminem's "The Darkness," where Slim Shady stares at a U.S.-shaped wall of TV sets blurting out reports on America's never-ending media machine. Instead of railing against noble efforts to curtail America's acceptance of gun violence, however, Kid's TVs show stock footage of news stories reporting that he's been a dickbag about this whole pandemic— and he views them all from some sort of white trash Batcave. Kid Rock didn't need to put fake news videos of how he's encouraged super-spreading of COVID and many conspiracies. He could've just run real news stories about him and his various ventures doing just that and saved a ton of his stock video art budget.

The whole thing is basically one long list of complaints about how Kid Rock can't have his way and how he hates it when he gets called out for doing stupid shit. It's extra amusing that Rock counters credible reports and scientists working to fight COVID-19 with the lyrics "get a clue, a crew, your fake news and views can all get the bottom of my motherfucking shoe" when his whole visual screed starts with an actual wall of fake news.

If the song went on any longer, he'd probably do lyrics like, "Fuck all those doctors and people in power, who say every day I should really take a shower."
2. Royce da 5'9's "Tricked"
Royce's 2020 track starts out sounding like something with a modicum of sense and accessibility. Then it hits a patch of ice, veers head-on into a concrete abutment, gets up and tries to continue even though it clearly suffers from brain damage. And then, it tries to convince you that its brain damage was caused by vaccinations.

The song talks about how we're all being "tricked into thinking we need that, we need this, tricked into thinkin' since we rap, we get rich" and how "thinkin' that the art is a pie to be split." Sure, rampant materialism is an illusion driving us to vote against our self-interests, take unnecessary risks and give up rights to preserve "safety." That's worth questioning. And just as you're nodding your head in agreement to the beat, he gets to the weird part and it stops your head from nodding so abruptly that you get whiplash.

Royce raps, "From day one at the hospital they target our children, Say they gonna immunize 'em they somehow get autism." Now at first glance, it's not totally clear from the wording where Royce stands on the idea that basic immunizations cause autism, a notion that's been debunked over and over and over again. Even though Royce had an out, he stayed put by nailing his feet to the floor.

Royce meant to say that he believes vaccinations can put children on the spectrum because, according to an interview he did with Complex, "You got the regular facts that get presented to you, and then you have the other facts that you got to go research. Well, I found that I was able to draw a correlation between autism and vaccination."

Now who feels tricked? You'll never get back that $1.99 from iTunes.
3. Cole Beasley's "Heavy 1s"
It was a tough day for Cowboys fans when wide receiver Cole Beasley left the team for the Buffalo Bills in 2019. Then the football player/rapper started going on anti-vax tirades and released this anti-vax track. Beasley found a way to make athlete-led hip-hop an even more tiresome genre.

It's not only filled with the usual athlete rap tracks about how great he is on the field, how rich he is and how all those things make him so awesome in general. It also layers on hilarious lyrics about his balls, in case the title "Heavy 1s" or the cover didn't already spell that out for you. Then Beasley drops his knowledge on science with the bar "Ain't a vaccination for me, only evacuation save 'em homie," which sounds like he thinks vaccinations are a scam and that the real cure may still have something to do with his balls. Either way, it's not worth exploring any further.
4. Ian Brown's "Little Seed Big Tree"
Most of the songs so far have just danced around the singers' personal knowledge when it comes to medicine, by hiding it away like a nugget of cursed treasure. But Ian Brown from The Stone Roses dedicated an entire song to conspiratorial, anti-vax stance with metaphors that are forced harder into a narrative than in a third-rate anime.

Brown takes the most tired metaphor of all time, the tiny seed that grows into a big tree, and makes it somehow sound even more trite by claiming the anti-vax, anti-lockdown movement is in its larval stage. He then veers from this tiny tree struggling to grow out of its seed back to lines like, "A forced vaccine, like a bad dream, they'll plant a microchip, every woman, child and man" and "5G radiation, beamed to Earth from space by satellites, the scientist and mediatrist (which we're guessing is a cross between a member of the media and a podiatrist), trying to tell me two and two is five."

On the bright side, this is song gives great insight into the mind of conspiracy theorists.
5. Eric Clapton's "This Has Gotta Stop"
Eric Clapton has become the walking embodiment of the phrase, "OK, boomer." He's not just a musical staple of the Baby Boomer generation. He's also taken on its aging paranoia. Mark our words: One day, he'll release a song called "Get Off My Lawn." He's got nowhere else left to go.

Clapton isn't just a member of the anti-vax movement, he's one of its executive producers. Really. Clapton has put up money to champion anti-vax bands (Christ, it's a genre now) like Jam for Freedom, which is, really, an actual band.

Then earlier this year, the man who once implored us to "Cha-a-ange the world" is expressing how all "This has gotta stop" in his newest song of the same name. It's hard not to empathize with Clapton for expressing his exasperation at the events of the past few years, which have been tiring and dangerous no matter what wild stories you do or don't believe. However, the guitarist loses that traction by blaming everyone but the people and entities who aggravated and outright ignored the growing pandemic. Instead, he cries about how he "knew that something was going on wrong, when you started laying down the law," referring to lockdown and mask requirements, which isn't a stretch given the things Clapton has said about doing the bare minimum to stop the virus from spreading.

So instead of becoming a self-serving prophet exorcising the demons of our hatred, he's become something even worse: the lead singer of a dad band.
KEEP THE DALLAS OBSERVER FREE... Since we started the Dallas Observer, it has been defined as the free, independent voice of Dallas, and we'd like to keep it that way. With local media under siege, it's more important than ever for us to rally support behind funding our local journalism. You can help by participating in our "I Support" program, allowing us to keep offering readers access to our incisive coverage of local news, food and culture with no paywalls.
Make a one-time donation today for as little as $1.