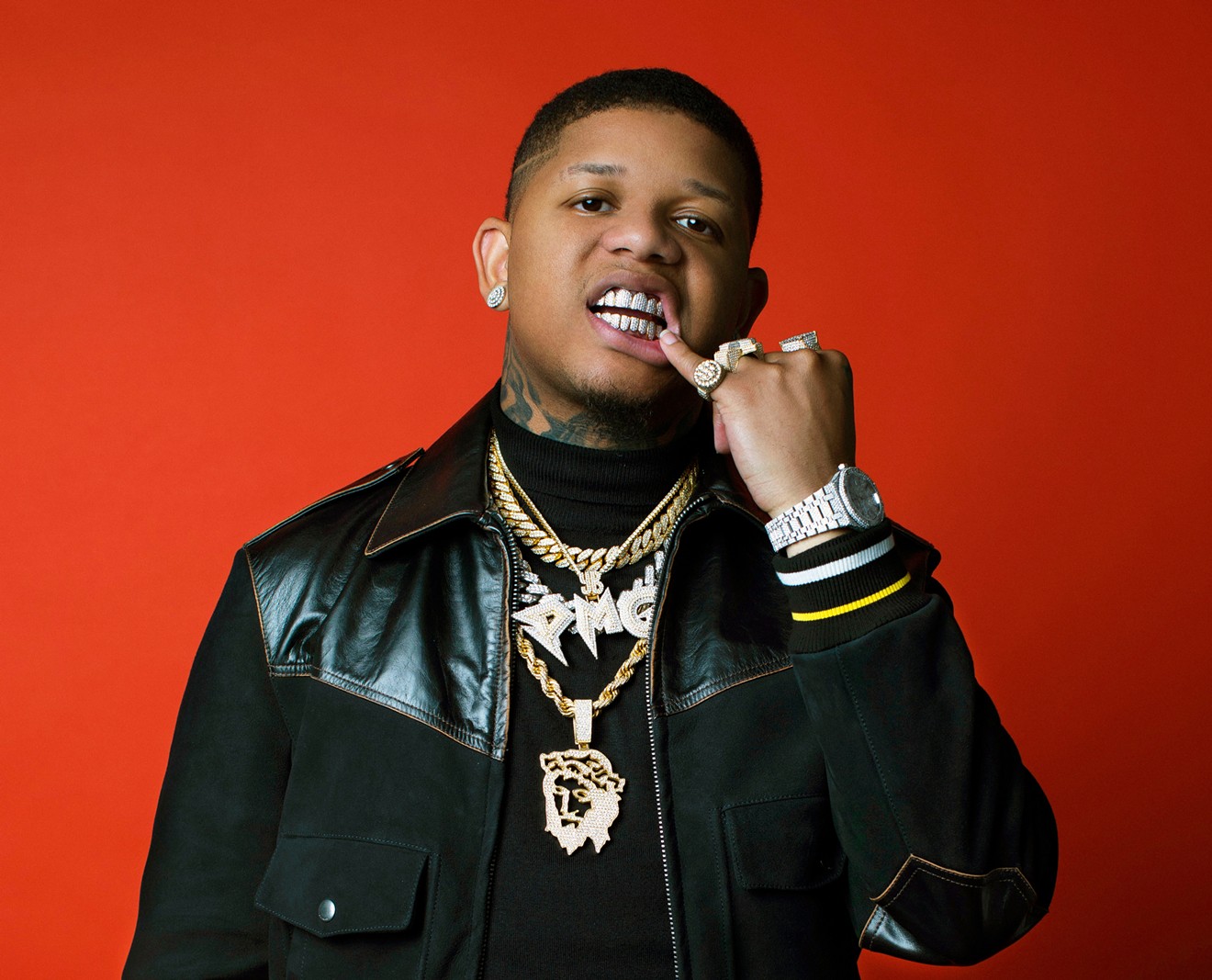 The Yella Beezy song featuring Ty Dolla $ign “Ay Ya Ya Ya” shows why the rapper is the life of the party. Cam Kirk
It's the last month of the year, but these North Texas artists are ending it with a bang — songs so hot you'll forget it's winter.

Yella Beezy ft. Ty Dolla $ign, “Ay Ya Ya Ya”
While his Chris Brown-featured “Restroom Occupied” soars to platinum status, Yella Beezy doubles down with a catchy B-side with Ty Dolla $ign, called “Ay Ya Ya Ya.” Tapping into his infatuation for Latin culture and women, the Oak Cliff native raps about heading out to the club and being the life of the party. Yella Beezy told Los Angeles radio station Beats 1’s Zane Lowe that he made the track with Ty while on the recent Chris Brown IndiGOAT Tour.

“Being on the Chris Brown Indigo tour, we had rooms next to each other," Beezy said of Ty. "I heard him playing music. I went next door, start playing a song, we’d start swapping song for song. He’s just a humble dude, you know? A lot of people be at the peak of their career ... they’ll be on some funny stuff. You know what I’m saying? I never got no vibes from him, he always welcomed me, and I always get him to come play my music or want me come hear his music.”

Katrina Cain, “Promised Land”
L.A.-by-way-of-Denton's Katrina Cain arrives with her long-awaited new cut, “Promised Land.” Celebrating a new life, the former contestant on The Voice returns with an experimental pop sound as she does some soul-searching on Hollywood Boulevard.

“On New Year's Day 2019, Andrew McMillan and I drove from Dallas to Los Angeles to completely start over," Cain says of the song's origin. "It took us three days because we got caught in an ice storm and had to sleep in a freezing U-Haul truck at the only gas station within 40 miles of El Paso. We got to California, and it was still on fire — we could see burned earth on either side of the highways. I came [to LA] with no money, no job, definitely no connections and a temp six-month housing situation. I turned 30. I cried a lot. I wrote a song. Now it’s gonna be yours.”

A full-length collection of the same title is slated for an early 2020 release. With five new songs — Cain's most honest work yet — the new EP deals with rebirth from failure and freedom through loss.


Dezi 5, “Lady”
This year’s Dallas Observer Music Awards host talks to the ladies through the soon-to-be neo-soul hit, advising women to appreciate their innate beauty. Dezi 5 narrates a Cinderella-esque tale about a lost woman who eventually finds her own unique quality, an awareness that transforms her into a queen.

The song’s soul is a spiritually awakened electrified pop gospel production set to cross over to multiple genres. Uplifting, joyful and eclectic, Dezi’s salute to the beautiful women all over the world is another must-have jam by the future legend that will quickly become a mainstay selection for that daily preparation playlist.

Cody Lynn Boyd, “Down by the River”
Cody Lynn Boyd is one of the most remarkable musicians coming out of Dallas right now. The Mansfield singer-songwriter is adored for his deeply rooted, brown-eyed soulful alternative rock sound. Infatuated by his vintage sound, the performer gifts fans with another broody new track called “Down by the River.”

A retro coming-of-age concept about a young boy searching for salvation, the single's a slow burn. Over simple live instrumentals, Boyd testifies through old-school vocals about finding clarity within the murky water down by the river. The song was reinforced with a catchy hook that sings, “Down by the river/I feel good.”

The single, like the artist, is persuasive in its moody crossover appeal — the kind that previously belonged to legends like Johnny Cash, David Bowie and Freddie Mercury. The song’s black-and-red visual is directed and edited by Boyd himself.

A posse cut, the hottest of the DFW underground, joins established artist Ray Rizzle for a city tour-guided remix that pays homage to many of the area’s staples, pinpointing the location of the baddest women in the city, where the jackers, best food and nightlife activities are and telling us what to do on Interstate 30 West. Produced by Fooly Boi Buc, the remix’s nostalgia creates an instant street classic. “Dallas Drip” is the perfect new addition to the Ultimate Cowboys Playlist, as it mentions the city’s Super Bowl glory days.

Whether taking a trip down memory lane or whether you're new to the city and wondering where the hottest spots are, this is a track that everyone will appreciate, forever.

Thoreau, “Best Life”
After being away from home for a while in search of superstardom, Dallas-bred Thoreau returns with great tales to share on his new single, “Best Life.” An upbeat bit of refreshing air, Thoreau raps about discovering personal nirvana and suggests you do the same through self-reflection. Lyrically, he executes a playfully animated tongue-twisting flow that will entice newfound fans based on its trickery alone.

Filled with quotables mentions, “Best Life” adds to a recent string of hits that includes “Wrong” and the Mac Miller-dedication “Dunno.” The song sets up an anticipated new project scheduled for an early 2020 release.
Southern Weather, Southern Weather (EP)

The debut EP’s single, “My Favorite Song,” laid the foundation for a successful new album campaign. Southern Weather's self-titled project is a five-track radio-friendly trailblazer of hot love stories, electric rock influences and bubblegum verses. The album includes other fan-favorite songs like “The Fence” and “Lose My Mind.”

The introductory project delivers a groovy rhythmic voyage of distinctive, heartfelt and vibrant energy that fans will be praising until the release of the band's full-length studio effort, promised to come in 2020.

Erica Banks, “I’m Great”
2019 bore witness to the fire of Erica Banks. The Dallas native rose to popularity with a berserk barrage of lethal raps. To close out the year, the self-proclaimed “Hardest Female Rapper in Dallas” boasts and brags heavily on the Cocky on Purpose cut, proudly titled “I’m Great.”

Ready for all the smoke, Banks is prepared to accept all challengers in 2020. Now who will be the first to step inside the ring with the ferocious rookie of the year?

Tay Money ft. DaBaby, “Booty”
Well played, Tay. It was a smart move, to say the least, to close out 2019 with a huge collaboration with the Grammy-nominated DaBaby for a guaranteed chart-topping booty-shaking hit properly titled “Booty.” While DaBaby raps about devoting himself to his favorite part of the female anatomy, Tay Money hypnotizes the North Carolina guest rapper with an explicitly seductive, raunchy and addictive verse that details just how infectious her curves can be.

Off her new album, Hurricane Tay, “Booty” is easily Tay Money’s biggest hit yet. Perfect timing for a live performance of the new track with DaBaby bringing his Kirk tour to Dallas this Saturday (Dec. 21) at the South Side Ballroom.

Mo3, “Why”
What can we say about Mo3? "He’s on fire" (read that with an NBA Jam voice). Following “Ride For Me,” “Why” is the third single release by the North Dallas rapper in less than a month. Off his new Osama album, “Why” examines Mo3’s problematic past with heavy auto-tune mentions of his mother, cellmates and youth counselors.

The rapper questions the why-this and the why-thats — the things that may lead to a potential demise by a “so-called friend," a cautionary tale that street rappers should heed after the tragic fates of Tupac, Notorious B.I.G. and, most recently, Nipsey Hussle.

The 19-track collective features guests Lil Boosie and Atlanta super producer Jazze Pha. Mo3’s most vulnerable effort yet, including songs “Ride For Me” and “That Ain’t It,” Osama is  No. 40 on Apple’s Top 100 Hip Hop downloads.

Beneath the guitar and funky pop production, a candid Nourallah addresses the passing of his mother as he reflects on his childhood and the precious moments he shared with the woman who made him the superstar he is. The sentimental tribute returns the Texas rock star to glory with the exciting promise of new music to come.

The new song is scheduled to appear on Nourallah’s anticipated eighth album, Jesus of Sad, released via Palo Santos Records on Jan. 31.

Trapboy Freddy has one more hit for 2019. As his new song “Lil Quita” accumulates millions of views, the Oak Cliff native won't let off the gas and has released a quick follow-up in “Lit.” In the Yella Beezy cameo, Trapboy Freddy returned to his player ways with a potential strip club anthem about making it on the pole. The visual is filled with high-seas high jinks in between a whole lot of rump shaking, ending with — of course — a trip to the strip club.

“Lit” is another one-shot release as fans patiently await the release of his forthcoming Rockboy Freddy, the 2020 follow-up to Flow, scheduled for an early 2020 release.
AssHole in Gold, “£8”
The Houston transplant has had a speedy trajectory to the top of the hip-hop scene with his over-the-top image and lyrics. With his new album, It’s Asshole, he digs into his vast repertoire of flows to unveil a buzzer-beater, creatively titled “£8.”

Asshole in Gold taps into his lyrical prowess. Sampling Drake’s “Wu-Tang Forever,” a composed ASG dignifies himself as a purist with the words, “I’m feeling energized commanding what’s inside to rise/strengthen all that’s strong and let’s the weakness in me die …”