Kris Askew Dallas County
A Dallas man hacked two people to death with a machete before ditching the bodies in one of the victims' cars late Saturday night, police say.

Dallas police got a 911 call around noon Sunday, after a neighbor checked out a car that had been left across the street from their Frost Avenue home at about 10 p.m. Saturday. When the witness peeked in, they saw Judy Askew and Randall Lynn in the vehicle, dead from machete wounds. Judy Askew owned the car.

Police went to the Bexar Street address listed on the car's registration and met Kris Askew. Askew had a fresh cut on his left hand, and police found blood in an upstairs bedroom and on the blinds. 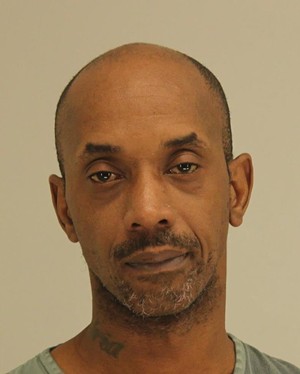 Kris Askew
Dallas County
According to an arrest warrant affidavit, Askew admitted he killed Judy Askew and Lynn by cutting them with a machete on Feb. 20 because he was mad at Lynn.

Lynn survived two or three days after the attack, Askew told police. When he died, Askew put both bodies in Judy Askew's car, drove it to Frost Avenue and walked home.

Police have not released any additional information about the relationship between the victims and Askew, or the events that led up to the killings.

Following his confession, police charged Kris Askew with capital murder. He is locked up in Dallas County Jail with bail set at $500,000.
KEEP THE DALLAS OBSERVER FREE... Since we started the Dallas Observer, it has been defined as the free, independent voice of Dallas, and we'd like to keep it that way. With local media under siege, it's more important than ever for us to rally support behind funding our local journalism. You can help by participating in our "I Support" program, allowing us to keep offering readers access to our incisive coverage of local news, food and culture with no paywalls.
Make a one-time donation today for as little as $1.