Dallas police announced Friday afternoon that they've made an arrest in two sexual assaults that occurred in downtown Dallas and Deep Ellum over the weekend. The Dallas Police Department says an anonymous tip led officers to arrest Jerly Patrick Graves Bailey Jr., 36, on Thursday on warrants for forgery and several outstanding parking tickets.

After Bailey's arrest, cops collected enough information in an interview with the suspect to charge him with the two assaults, which happened early Saturday morning.

At about 2 a.m. Saturday, the man police now believe is Bailey met and befriended a woman in Deep Ellum. He offered to give her a ride home, according to police, and the woman accepted. During the drive, Bailey allegedly sexually assaulted the woman. As they approached Mockingbird Lane on the Central Expressway service road, the woman bailed out of the car, picking up minor road rash injuries.
click to enlarge 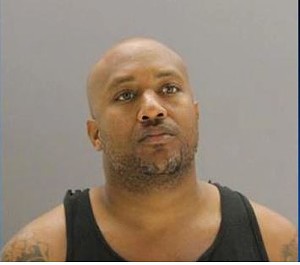 
Police say Bailey headed back downtown, where he found a woman walking home from Deep Ellum near the intersection of Elm and Harwood streets. Bailey allegedly attacked the woman. She began screaming, and her boyfriend ran to fight Bailey off.

Bailey is charged with four felonies: the two sexual assaults, forgery and possession of controlled substance. His bail is set at $250,000. According to DPD, Bailey has previous convictions for assault of public servant, assault causing bodily injury, unlawful possession of firearm by a felon and aggravated robbery.