Voters took care to wear masks and keep their distance on the first day of voting during a pandemic. Lauren Drews Daniels
As a chill blanketed North Texas early Tuesday morning, thousands of Dallas County voters woke up and made their way to the polls, setting a record for the number of votes cast on the first day of early voting in Texas for the 2020 general election.

The doors were officially unlocked at 7 a.m., but voters began lining up at the Oak Cliff sub-courthouse on South Beckely Avenue just after 6 a.m. Three hours later, a socially distanced line hugged the entire perimeter of the building and made a hairpin turn back down a sidewalk, dodging traffic, not sure what to do with itself. But it figured it out.

Minnie Rodgers, 75, said she would have set her alarm even earlier had she known the wait would be so long, as did her line neighbor. They both said they thought when they arrived at 6:15 a.m. they’d be the first in line, but two hours later, they were just within sight of the door. They didn’t mind, though.

“Being part of the civic process is worth it,” said the voter in his 70s, who preferred not to be named. “It’s going to be a historic election. Kids are going to read about this in the history books.”

Rodgers said kids will read that even though there was a pandemic, people still stood in line to vote.

Lisa Hembry was relieved the weather was nice and didn’t mind the two hours she'd already waited. She enjoyed meeting people and found it all to be a very pleasant experience.

Brittany Turner and Oge Okeke voted at the El Centro College West campus. They only waited about an hour in line, and once they made it inside the voting process just minutes. Turner said she wanted to get her vote in early and ensure if there were any problems, there’d be time to take care of them.

Back at the Oak Cliff sub-courthouse, Felicia and Keith (last name not given) said they always vote together along with their son. Felicia was wearing bright red scrubs with a company name embroidered on the front. She has an infectious, easy laugh, but when asked why she was voting today, she turned serious.

“This means so much because of everything that’s going on,” Felicia said. “There’s no way I can stand another Trump administration. We need a new administration. There’s too much animosity. We need peace.” 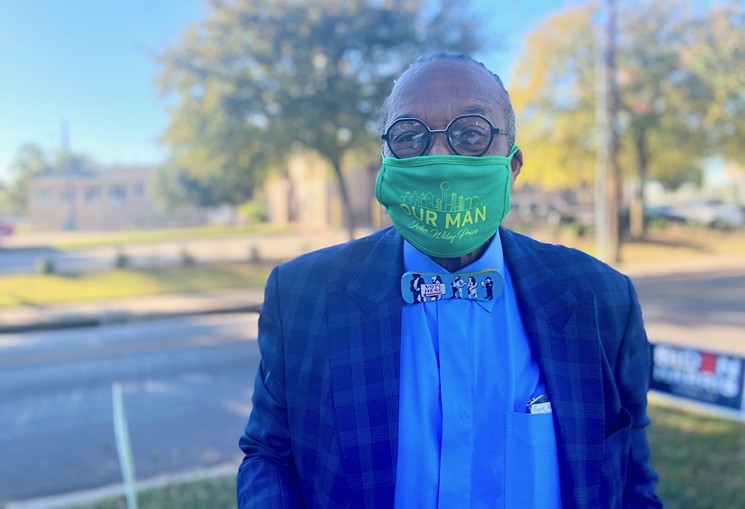 “He’s standing here, too,” Price said, gesturing to the gentleman behind him who’s soft, blue-rimmed brown eyes peered between a mask and baseball cap. “He’s 81. So, if he stands here, I’m going to stand here, too. I want to experience what my constituents experience.”

When his phone rang, he answered with a sharp, “In line voting.”

Price, who is on the ballot for his county commissioner spot, which he’s held since 1985, says he always votes on the first day of early voting.

“In case I die tomorrow, I already voted,” he joked.

When asked about the large turnout, Price said. “It speaks volumes.”

The man behind him who only gave his last name, Bailey, said this was the first time he’d ever seen a line like this to vote.

“Ever. Period,” he added. “This is an indication of what’s going to happen this election.”

Around 9 a.m., more than 150 people were in line. The wait time was a few hours, but once inside the door, multiple early voters said the voting process was efficient and quick, and COVID-19 safety protocols were in place. Even without straight-ticket voting, which is no longer allowed in Texas, voters said they worked through the ballot in just a few minutes.

Craig McCoy, 53, said he saw the line when he drove up and could have whipped a U-turn and voted another day, “but it’s too important, so I stayed. I think some people just made up their mind they’re going to do this today.”

A man who just completed voting bounded through the exit door with high energy. He said he spent two hours in line and once inside it took an hour for him to get a ballot. He’d applied to vote by mail, but never received his ballot, so he showed up today and the elections officials invalidated his mail-in ballot and issued him a new ballot. (Elections administrator Toni Pippins-Poole explained in a previous meeting that this is exactly how this situation is supposed to work.)

Nicole Simmons, 47, was on the verge of crying as she hopped down the stairs, smiling and waving goodbye to people in line and election workers assisting the awkward process of curbside voting.

She pulled out her phone to show her Facebook page, which is covered with pictures of the historic 1965 civil rights movement march in Selma, Alabama, her inspiration for standing in line today.

"I’m just ready for a change. I’m just so inspired by everyone here,” Nicole Simmons said after casting her ballot on Tuesday.
Lauren Drews Daniels
Around noon, Dallas County Judge Clay Jenkins Tweeted a gif of Snoop Dogg triumphantly dancing with a note that 22,000 voters had already cast a ballot in Dallas County. By 9 p.m., the county counted 59,809 first-day votes, eclipsing the 58,775 cast in 2016.

The Houston Chronicle reported that Harris County broke their record for ballots cast on the first day of early voting by 1:40 p.m. Tuesday with five hours left to go.

Map with Wait Times
An interactive map with wait times at all Dallas County polling locations was batting about .500 Tuesday afternoon. Half the locations had question marks, while the other half did provide green, yellow or red dots with estimated wait times. The mega-voting center at American Airlines was consistently at green throughout the day.
KEEP THE DALLAS OBSERVER FREE... Since we started the Dallas Observer, it has been defined as the free, independent voice of Dallas, and we'd like to keep it that way. With local media under siege, it's more important than ever for us to rally support behind funding our local journalism. You can help by participating in our "I Support" program, allowing us to keep offering readers access to our incisive coverage of local news, food and culture with no paywalls.
Make a one-time donation today for as little as $1.