Yu Luo (left) and Shiguo Wang Lenahan Law Firm
NorthPark Center's parking garages would be better classified as dangerous stunt-driving tracks, according to a lawsuit filed Wednesday in Dallas County. The suit, filed by the families of two men hit by a speeding car in the mall's Nordstrom garage in March, calls for NorthPark's garages to be shut down for a year and seeks millions in damages.

Yu Luo and Shiguo Wang, both from China, parked in the Nordstrom garage late in the evening of March 11. Hoping to find dinner, the two tried to enter the mall via the second-floor walkway into Nordstrom. The store was closed and its doors were locked. Luo and Wang headed for the other second-floor walkway out of the garage, one that went into the mall directly.
click to enlarge 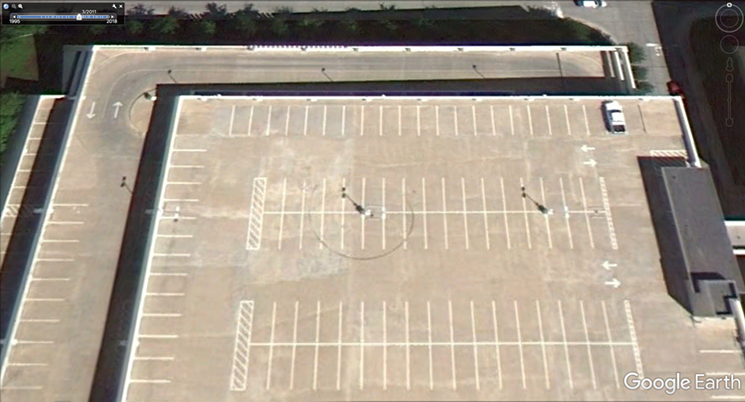 The roof of the Nordstrom garage in 2011
Lenahan Law Firm

At the same time the men were trying to find their way into the mall, according to the suit, Christopher Shaw was making a "speed run" from the bottom of the garage to the top. Shaw saw the men in his path and tried to steer out of the way, unsuccessfully. Luo slammed into an elevator well, smashing his head like a "watermelon," according to the suit, and killing him. The impact threw Wang over the garage's second-floor edge, leaving him with multiple injuries.

The lawyer representing the families, Marc Lenahan, blames the accident, in part, on NorthPark Center, for failing to put speed bumps or sufficient cameras in the garage, leading to the garage being the site of frequent speed runs and races. He cites photos of the garage's roof showing skid marks as proof of the celebratory doughnuts that have been performed.
click to enlarge

The roof of the Nordstrom garage in 2019
Lenahan Law Firm

Lenahan is also calling out the mall for not releasing the footage it does have of the incident.

“Once again, NorthPark Center has proven that keeping its customers’ money so that it can humble-flaunt its wealth is more important to it than keeping its customers safe,” Lenahan said. “We are calling on the public to boycott NorthPark Center this holiday season. Bring your shopping and your families to Highland Park Village, the Galleria, Stonebriar or Willow Bend, instead of to NorthPark, which proved in a sworn affidavit that it wants to mislead the public with an incomplete image of what happens to customers there.”

The mall issued the following statement about the suit to reporters:

“NorthPark is in receipt of a lawsuit filed against it related to the tragic incident on March 11, 2019. Following the incident, NorthPark immediately began its investigation alongside legal counsel and local authorities. While NorthPark remains deeply saddened by this incident, NorthPark unequivocally denies all claims of wrongdoing asserted in the lawsuit. Beyond that, NorthPark cannot comment at this time on pending litigation.”

Dallas appellate attorney Chad Ruback says the plaintiffs will have their work cut out for them if they hope to prove the garage was a "de facto race track," as they claim.

"Based on this 2011 photo showing that joyriding had taken place once in 2011, the petition suggests that joyriding had been consistently taking place in the parking garage from 2011 until the time of the tragic incident in 2019," Ruback says. "For the plaintiffs’ case to succeed, they would likely need to show that joyriding was a regular occurrence in the parking garage and that NorthPark either knew or should have known this."
KEEP THE DALLAS OBSERVER FREE... Since we started the Dallas Observer, it has been defined as the free, independent voice of Dallas, and we'd like to keep it that way. With local media under siege, it's more important than ever for us to rally support behind funding our local journalism. You can help by participating in our "I Support" program, allowing us to keep offering readers access to our incisive coverage of local news, food and culture with no paywalls.
Make a one-time donation today for as little as $1.