Kevin Whitt was in Washington Jan. 6 but says he didn't enter the Capitol. Photo by Andy Feliciotti on Unsplash
Kevin Whitt has worn many hats. He was a drag queen before he became a conservative Christian activist. He was also a field organizer for the Republican Party of Texas, but he's now back on the job market.

Last Monday, The Texas Tribune reported that Whitt had filmed himself outside the U.S. Capitol amid the Jan. 6 insurrection. During that incident, supporters of former President Donald Trump stormed the building in an effort to stop the certification of the November 2020 presidential election results, which they claim were rigged.

Another video showed him yelling at diners and waitstaff at Comet Ping Pong, the Washington restaurant at the center of the Pizzagate conspiracy theory.

The state’s GOP promptly dropped Whitt after the outlet asked for comment, according to the article.

Whitt blames his firing on The Texas Tribune and claims subsequent news articles were written with a liberal slant.

So what did the liberal media get wrong, according to Whitt? Some insinuated that he had gone inside the Capitol building; he said he never did. The Texas Tribune wrote that Whitt had dined at Comet Ping Pong; he said he hadn’t.

Luke Twombly, spokesman for the Republican Party of Texas, told the Observer that it was Whitt’s self-filmed outburst at Comet Ping Pong that led to his termination.

“We found that unacceptable behavior,” Twombly said. “He can blame the Tribune if he wants, but it was his behavior that did it.”

Whitt said he felt “canceled” for his views, but Twombly refutes that, too.

“There’s a difference between being given your walking papers and being canceled,” Twombly said.

A video on Whitt’s Facebook shows him arguing with a Comet Ping Pong waitress. He accuses the restaurant of "serving up dead kids" and shouts into the dining room that they are pedophiles who are abusing children.

The Pizzagate conspiracy theory first appeared around the 2016 presidential election. It alleges the restaurant is home to a child sex-trafficking ring, a theory that has led some extremists to threaten waitstaff and show up with guns. In December 2016, a man traveled from North Carolina with an AR-15 and fired three shots into the pizzeria. No one was injured, but the incident underscored the real-life consequences of conspiracy theories.

“I’m tired of people trying to spread these lies that I’m out to get them. I’m not." – Kevin Whitt

During his encounter at Comet Ping Pong in December, Whitt said a “suspicious” waitress asked him to leave after she caught him filming the restaurant’s artwork. He said he was attempting to uncover the purported satanic and pedophilic symbolism within the paintings.

But Whitt said he never ate there; rather, he and his friends were going to buy bottled beverages.

“The history is that they put baby parts in their pizza sauce,” he told the Observer. “And I was like, ‘I am not going to eat like baby parts. Disgusting.’”

Believing Pizzagate is one thing, but Whitt denies subscribing to QAnon, a conspiracy theory that claims elite Democrats are part of a satanic, pedophilic, cannibalistic cabal.

Although he once identified as trans, Whitt said that changed after he had an encounter with Jesus; shortly after, he became a conservative. He abandoned drag upon converting to Christianity.

Now, Whitt is dedicated to lobbying to ban gender reassignment in young children; if kids are too young to purchase cigarettes, he said, they shouldn’t be allowed to choose their gender. 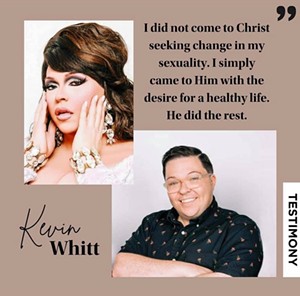 He wasn’t always that way. Prior to becoming a conservative, Whitt said he auditioned for RuPaul’s Drag Race. He said he submitted his audition tape late but that the show featured it on commercials.

Whitt has also protested against Dallas Public Library’s Drag Queen Story Hour. He believes that some LGBT activists may “counsel” children to become transgender or dress in drag.

He said he’s passionate about the cause because he was gender-confused as a kid and was made fun of for being feminine, and his childhood was a “living hell.” He wants kids to realize that being effeminate doesn’t mean they’re gay.

“I’m tired of people trying to spread these lies that I’m out to get them. I’m not,” he said. “I just want them to leave kids alone. That’s all.”

Whitt has also organized "Open Texas" rallies to protest Gov. Greg Abbott's COVID-19 policies. Before getting hired as a GOP staffer, he worked as a stylist at the Dallas salon of Shelley Luther, another vocal Abbott critic and one-time state Senate candidate.

Although he said he will never work for the Republican Party again — he now considers himself an independent — Whitt said he’ll be involved in the current state legislative session. He’s said he’s still the Texas assistant director for the “pro-family” MassResistance, an organization that the Southern Poverty Law Center has labeled an anti-LGBT hate group.

Some have accused Whitt of sympathizing with the Proud Boys, which Canada considers a terrorist group and the SPLC defines as a hate group. Critics have pointed to a selfie posted to Whitt’s social media in which he flashes the OK symbol, a hand gesture that has been co-opted by extremists, according to the Anti-Defamation League.

Whitt laughed when the Observer asked him about the photo and denied that the symbol stands for white power.

“It’s just simply, simply a way to troll the left,” he said. “We want to troll the left sometimes because the left gets mad at every single thing we do.”
KEEP THE DALLAS OBSERVER FREE... Since we started the Dallas Observer, it has been defined as the free, independent voice of Dallas, and we'd like to keep it that way. With local media under siege, it's more important than ever for us to rally support behind funding our local journalism. You can help by participating in our "I Support" program, allowing us to keep offering readers access to our incisive coverage of local news, food and culture with no paywalls.
Make a one-time donation today for as little as $1.